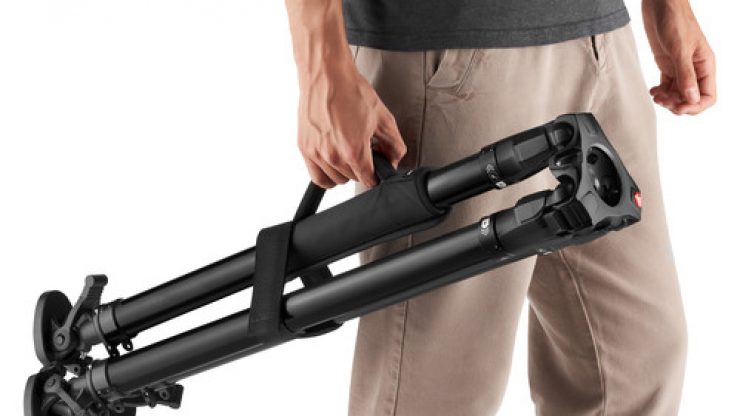 Manfrotto has new Fast Lock Tripod Systems in the form of the 645 FTT Fast Twin Tripod and 635 FST Single Leg Fast. These tripods were originally announced at IBC last month, but we didn’t get a chance to cover them at the time.

Both Fast Lock Tripod Systems are targeted at professional users who want something that is easy and quick to set up. If the locking design mechanism and 3 angle selection position look similar to the system that is used Sachtler Flowtech that shouldn’t come as a surprise. Vitec owns both Manfrotto and Sachtler.

Both tripod ranges were developed with the primary objective of making video shooting easier by reducing set up times and maintenance. The synchronized closure mechanisms between the upper and lower locks, enable users to control the entire leg with a single lock. Both tripods support a wide selection of heads.

They are also are compatible with the 2 in 1 ground and middle telescopic spreader (which is sold as an optional accessory). They feature a 3-angle selection mechanism for easy set up. They are equipped with spiked feet with rubber overshoes.

The 645 FTT Fast Twin Tripod is the first model in a new range and it features double tubing and Ultra L-Lock lever technology. The tripod utilizes a 2 in 1 half ball: a standard 100mm bowl along with a 75mm adapter. This enables it to take a wide variety of tripod heads.

The tripod weighs 3.6 kg and it can handle payloads of up to 20kg.

It also has a middle spreader lock, and as the tripod comes with 3-angle selectors, you don’t have to use the spreader to keep the legs steady.

The 635 FST Single Leg Fast has single tubing and features the Extra M-Lock twist lock, for easier secure locking. The 635 FST tripod features a 75mm half ball and is compatible with a 60-mm half ball adapter (sold separately).

It also features Easy Link friction arm attachments that are compatible with Manfrotto anti-rotation and Arri anti-twist pins. This enables users to attach an external monitor or any other accessory they may require without having to worry about the arm rotating while in use.

Manfrotto makes these models in Italy. The new Fast tripods will be available in November. The 645 FTT Fast Twin Tripod will retail for $949 USD. The 635 FST Single Leg Fast will retail for $749 USD.

The tripods will also be available in kits with Manfrotto 608 and 612 nitrogen piston fluid heads. These heads have a flat base and 3/8″-16 mount so that they can be switched easily between a tripod and slider or similar camera support.