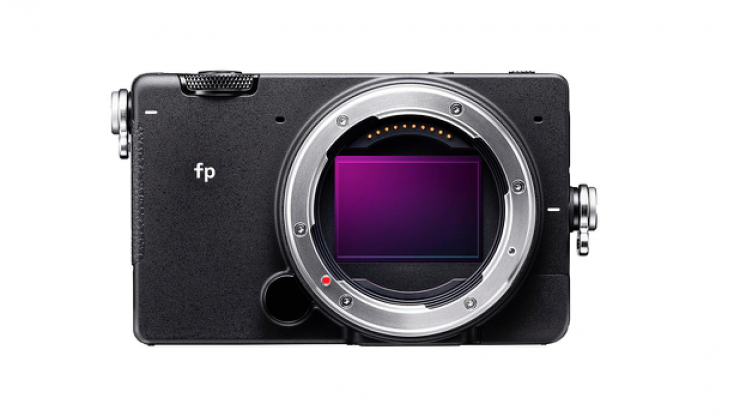 The Sigma fp will start shipping on October 25th for $1,899 USD. Sigma is touting the fp as a pocketable full-frame camera. Sigma says that the fp changes the paradigm of what a ‘digital camera‘ should be.

Sigma set out to create a high performance, interchangeable lens camera that had the form factor of a smartphone. The camera has dimensions of 112.6×69.9×45.3mm and body weight of 370g.

The fp is equipped with a 24.6 megapixel Bayer full-frame sensor. The camera supports 12-bit CinemaDNG external recording for RAW video data and internal UHD 4K recording at up to 30p. Full HD recording can be captured at up to 120p. Sigma is quoting 12.5 stops of dynamic range for the fp when it is recording in CinemaDNG. The feature of playing CinemaDNG footage in-camera is to become available via a firmware update scheduled at a later date.

Alternating between still and cine shooting modes can be done by flipping a switch. Both the video and stills modes come with their own specially designed operating system.

The Sigma fp uses the L-mount. In addition to the wide-ranging choices of Sigma lenses, other manufacturers’ lenses can be used through the L-Mount Alliance with Leica Camera AG and Panasonic Corporation. With the Sigma Mount Converter MC-21, Sigma SA mount and Sigma Canon EF mount lenses can also be used. Third parties are also making PL to L Mount adapters.

When a DC lens (APS-C lens) is attached, the fp will automatically crop to the APS-C size angle of view. It is unclear whether you can manually select this function.

The fp has a Director’s viewfinder function that can simulate the angle of view and appearance of a cinema camera. This function supports most major manufacturers cameras, including the latest large format cameras such as ARRI ALEXA LF and RED MONSTRO 8K, it also supports film cameras and anamorphic lenses.

※ The video recording / playback function during the director’s viewfinder function will be implemented later by a firmware upgrade.

The fp has a 3.5mm mic input, a built-in stereo microphone, and a monaural speaker. In somewhat of a strange move there is no headphone jack.

What do you think about the pricing of the Sigma fp? Would you buy one? Let us know in the comments section below.