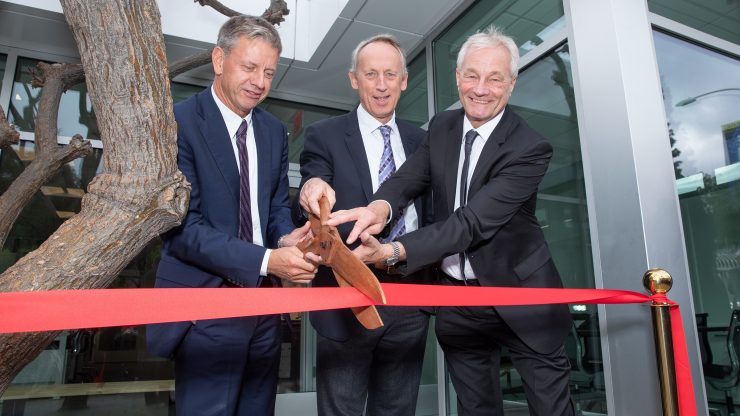 The American Society of Cinematographers (ASC) has completed the construction of its new ASC ARRI Education Center. This comes as the ASC celebrates its 100th birthday.

The Education Center is located behind the historic ASC Clubhouse in Hollywood, and the building will serve as a hub for the organization’s ongoing efforts to educate the next generation of filmmakers on the art and craft of cinematography.

The educational center was made possible through the support of ARRI, who celebrated their 100th birthday last year.

The new 5,000-square-foot space consists of offices, a large meeting room, and provides a gathering place for the exchange of ideas. In addition to being the home to all print and digital publications staff, the center also houses an archive of historic “American Cinematographer” magazines for those wishing to research the art and craft of cinematography.

The ASC ARRI Education Center is a very modern building which is in stark contrast to the old world charm of the ASC Clubhouse.

“It is thrilling to see the educational commitment of the ASC solidified through this endeavor. It’s also wonderful to be able to open this facility during our centennial party. For me, it manifests our mission for the next 100 years.”

“The ASC is one of the world’s premier organizations for cinematographers, with members not only in the United States but all over the globe. Like the ASC, we at ARRI believe in pushing the boundaries of filmmaking and advancing the art of cinematography.”

Dr. Joerg Pohlman, member of the Executive Board at ARRI.

The ASC began its educational mission way back in 1920 with the publication of its flagship magazine, “American Cinematographer,” which covers the artistic approaches and motion-imaging techniques of filmmakers. The society has cultivated its educational efforts over the century by establishing a number of programs to promote learning on a global basis. Its Education and Outreach Committee organizes frequent events for the benefit of filmmaking students and the general public, including week-long Master Classes taught by renowned ASC members.

Additionally, the organization hosts the annual Student Heritage Awards honoring both graduate and undergraduate film students; regular camera and lighting seminars; “Coffee and Conversation” Q&A sessions analyzing the work of cinematographers on a specific project; roundtable discussions featuring panels of professionals who address a variety of topics central to the work of camera people and other industry disciplines; and a bi-annual International Cinematography Summit bringing together participants from dozens of cinematography societies from around the globe to meet, share information, and prioritize an agenda that will forward the interests of cinematographers everywhere.

More recently, the ASC Vision Committee was inaugurated to promote diversity throughout the industry with a series of popular and highly engaging seminars and events devoted to nurturing an open dialogue and progressive hiring practices for women and minority filmmakers.

ASC was officially chartered in January 1919. Today, the organization has some 390 members. For more information, visit www.theasc.com.