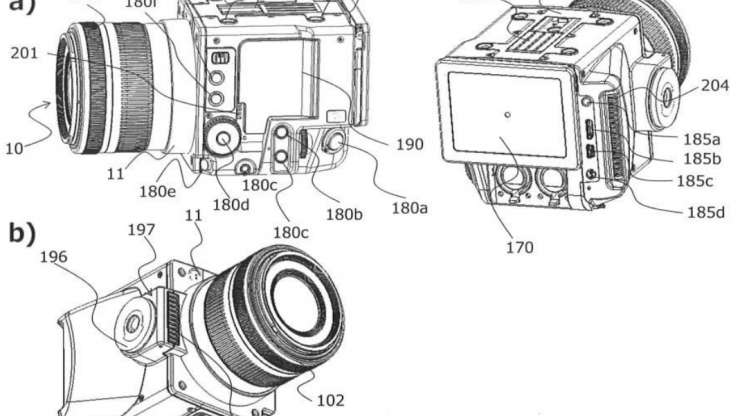 Canon has filed a patent for a compact video camera that is using a fixed lens that could be a sign for future products with an RF mount. While Canon has continued to stick with EF mount for their latest camera, the C500 Mark II, it is more than likely that sometime down the road they will make a switch to RF mount.

Japan patent JP 2019‑161567 A 2019.9.19 which was filed on the 19th September shows a compact camera that looks to be smaller than any Canon Cinema EOS series camera, but slightly larger than say an XC10.

The camera has dual XLR ports, a rosette style attachment that is possibly designed for a detachable handgrip, a rear screen, and an HDMI port. It also looks to utilize a Canon LP battery which slides into the side of the camera.

Now before anyone gets carried away, companies file patents all the time. Whether this particular design ever becomes a reality is still very much unknown. The drawings used in this patent application could very also be just for illustration purposes only.

Most of the patent seems to pertain to sensor cooling and a system for attaching accessories such as a video light.

While there is no direct mention of an RF mount, some of the illustrations show a lens mount that is too close to the sensor to be an EF mount. Again, it is hard to jump to conclusions as this could also be a fixed lens camera like the XC10.

This from the patent:

Due to the recent demand for miniaturization of devices such as digital video cameras, cooling has become a major design concern. As the image quality of devices increases, the power consumption of image sensors and electronic components increases, and the amount of heat generated by the devices also increases.

As the performance of an image sensor generally decreases as the temperature rises it is necessary to exhaust the heat that is being generated.

Therefore, an imaging device equipped with a cooling fan and a duct to exhaust heat is required.

Canon’s patent specifies that their invention can cool an imaging apparatus by using a forced-air cooling mechanism. The patent goes on to to say that there is a plurality of air inlets that are connected to the optical axis.

It’s very hard to gauge with any amount of certainty what this camera actually is from just reading a patent and looking at some illustrations.

What do you think this camera could possibly be? Let us know your thoughts in the comment section.