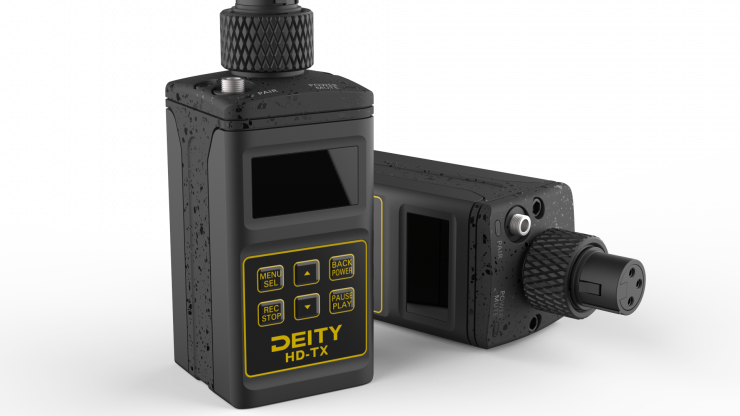 The new Deity HD-TX transmitter is a packed audio product that looks like a stick mic transmitter but it’s a whole lot more. Not only can it transmit 24bit/48kHz uncompressed lossless signal, it also records directly into the unit making it a portable audio record without sacrificing quality as it also records 24bit/48kHz uncompressed lossless. The HD-TX is an accessory for the Deity Connect wireless system.

What makes this even more interesting is how Deity got around a Zaxcom patent they hold for recording internally on a wireless transmitter. Deity explained to me the HD-TX doesn’t have timecode and the USA models cut the audio transmission when you hit record and resume transmission when you hit stop. This functionality isn’t included on Zaxcoms patent. The international units won’t have limitations as the patent only pertains to the US market.

We at Deity felt like there was a huge gap in the market between hardware. That people were having to buy lots of backups and spares that often go unused but still have to get hauled out to every give as a just-in-case insurance policy of sorts. So we felt that we could combine a few pieces like a spare lavalier transmitter and pocket recorder. We had lots of request to make an XLR transmitter for the Deity Connect wireless eco-system and we felt this would be a good platform to host all of these backup systems that people often have to buy and bring to set. Now for the first time you can transmit and record from a single device that features a headphone jack. For those living in the USA, the US units will transmit or record, doing both is not permitted but the recorder will serve as a great backup for situations when your wireless signals are acting up or when using wireless is not permitted at a live event like a national sporting event

*Deity HD-TX units sold inside the USA will disable audio transmission when you hit record. Only internationally sold units will feature the ability to transmit and record simultaneously.

**Run times vary based on RF Output, if Phantom Power turned on, and if the unit is recording to the micro SD card. Your battery life may vary. Reducing the RF Output will increase battery life.

I like the creativity Deity has done here giving the US market a much-needed record option. It is a good thing to have on a wireless system. Our international friends will get the whole enchilada without any internal recording limitations.

Data loss is a huge deal. That is why they added three safeguards to help prevent you from losing your recorded audio files. The first safeguard is a built-in battery. This eliminates the fear of sudden power failure from a battery door being opened or the use of mislabeled batteries. The HD-TX is charged via USB-C on the side.

Secondly, the HD-TX can predict the internal lithium battery’s power depletion curve so it knows when the battery is about to die, automatically saving the current recording before powering down the unit.

Lastly, they made it so that even if the power button is pressed in the middle of a recording the unit will stop the recording, save the file to the micro SD card, and then power down. Using the HD-TX screen and button lock can prevent even this last type of user error.

Deity states getting over 10Hrs of run time when transmitting at 50mW, recording, and having phantom power enabled to power a Deity S-Mic 2S.

The HD-TX  allows you to playback files through the headphone jack, rename, and delete takes. File names are determined by the USER ID assigned to the HD-TX, so if multiple units are being used file management in post-production will be easier to keep organized.

The new Deity HD-TX is an excellent added accessory to the Deity Connect wireless system. Not only does it give you an XLR option for a boom or stick mic but the added record function will come in handy. I always have an audio recorder ready just in case I run into problems or just need a quick pickup line. The international market gets the backup record option too.

The Deity HD-TX will retail for $249 USD and be available from December 3rd.