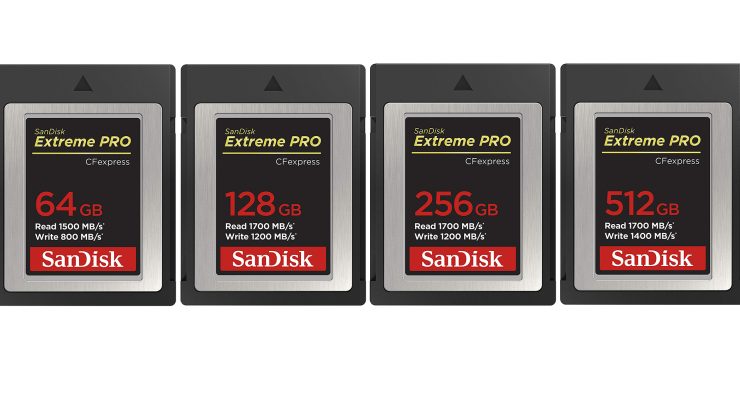 Yes, we have yet another recordable media option. SanDisk today a bit under the radar released the new Extreme Pro CFexpress Type B memory card in choice locations in Europe. Unfortunately all we have as far as information is in the video that was posted. No official press release was issued.

This morning B&H now has the new CFExpress Type B cards listed for preorder plus a new SanDisk Extreme PRO CFexpress card reader ($49.99 US).

The new Type B CFExpress utilizes the same form factor as Sony’s XQD cards, CFexpress Type B cards but the cards are much faster at reading and writing with speeds of 1700MB/s and 1400MB/s with the 512 GB model.

In the video, the new cards are used in a Nikon Z Series camera. That’s one big advantage for Nikon choosing this type of media. I’m sure other cameras with XQD will be compatible with a simple firmware update.

Pricing still isn’t released for the US market however on Amazon UK they are listed as follows:

When it comes to recording 8K video speed is going to be a bottleneck especially for higher bitrates let alone Raw capture. Media has to keep up and the new SanDisk CFExpress Card Type B look like a natural progression.

Unfortunately with progress comes a price. It will take a while before these come down. It will be interesting to also see who else is licensing the technology and releasing competitive options, plus the cameras that will adopt it. Is CFast dead? Will we see a cinema camera soon that is capable of taking advantage of the new Type B CFExpress Card format? IBC is around the corner so we shall see.