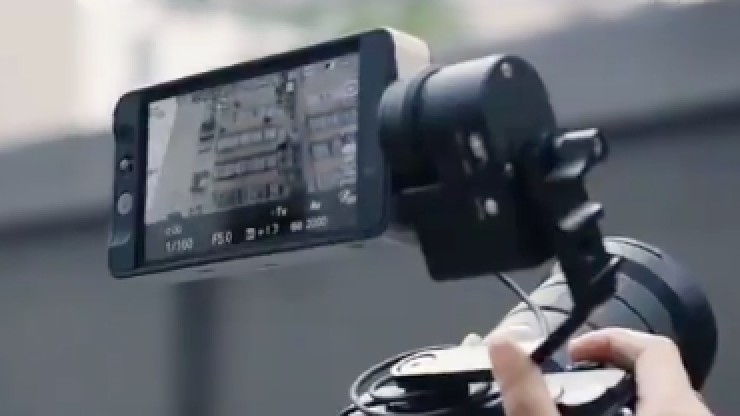 At BIRTV in Beijing, Pilotfly has announced Cavalier. Cavalier is a Smart Tracking Roller that has been designed to keep a monitor or light horizontal no matter which way you move a gimbal or camera.

On a gimbal, if you position your monitor normally, then try to shoot from low to high (or vice versa), then it becomes very hard to see the monitor. You can adjust the monitor for either position, but not during a shot. Some operators add a second monitor to help, but even this is not an ideal solution as the viewing angles still aren’t perfect and it adds unnecessary bulk.

Pilotfly Cavalier uses a quick release system where you mount one part of the device to a monitor or light and then it simply locks into place when you combine both parts.

Cavalier has two different modes, follow and lock. We believe it has internal batteries that can be charged via USB.

This is not the first time we have seen a self-leveling single-axis monitor mount. Back in 2016 Redrock Micro unveiled the Orbit Monitor Positioning System.

The Redrock Micro Orbit uses a thumb controller. You press a button on the controller and you can activate a ‘follow me’ mode that uses a sensor to automatically position the monitor in the right place for you to view it correctly. The sensor uses sonar and continuously measures the distance to the ground, with adjustable sensitivity and responsiveness.

Unlike the Pilotfly Cvalaier, the Orbit lets you adjust the tilt of the monitor manually using the Thumb controller if you prefer.

There is no current information about pricing or availability, although I expect it to be considerably more affordable than Redrock Micro’s Orbit which retails for $1,400 USD.