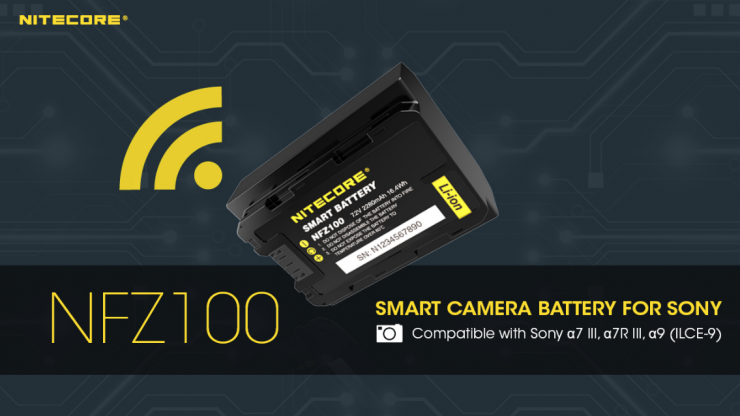 Over the last few years, we have seen quite a few developments in battery technology. Batteries are getting smaller, lighter, smarter, and increasing in capacity. However, most of these advances in technology have been for V-mount or AB Gold mount batteries, not for smaller batteries that are used in mirrorless cameras.

Well, now Chinese manufacturer NITECORE has come up with a Smart Camera Battery called the NFZ100, for the Sony a7III, a7RIII, and the a9. The ILCE-9 style batteries are claimed to be the first smart camera batteries that can be managed with a mobile app.

By using an app called NNERGY you can do real-time battery monitoring. NNERGY will display battery percentage, voltage, battery health, charging cycles, as well as information when the battery is being charged.

There is also a Storage Mode that will automatically reduce the batteries charge down to 70% if you haven’t used it in more than 10 days. While this is a handy feature for extending your batteries life, it may be an inconvenience when you go to grab a battery and then realize it is only at 70% charge.

The app also features a way where you can label your batteries by entering the last 3 digits of the serial number. This allows you to know exactly which battery is which if you are monitoring multiple batteries.

In a nice touch, NITECORE has made the NFZ100 batteries firmware upgradeable. What this means is if Sony brings out a new camera that uses ILCE-9 batteries you can update your battery so that it will work with that camera.

The ILCE-9 battery is probably going to be the type of battery used in the next iteration of the a7S.

AS A SIDE NOTE, THIS IS THE 5,000TH ARTICLE PUBLISHED ON NEWSSHOOTER.