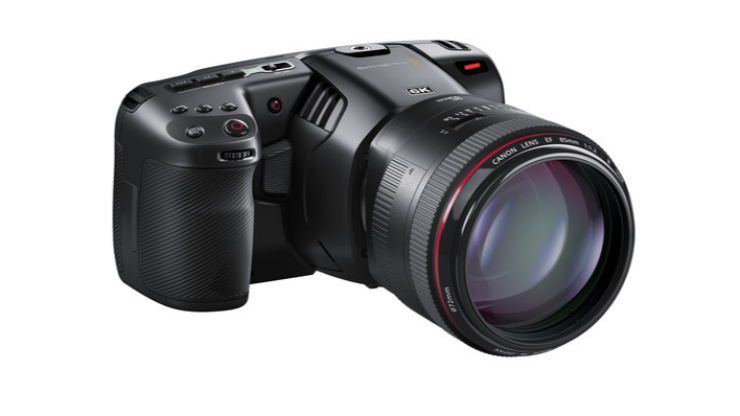 Today at 12 pm PST Blackmagic Design is holding a live update on what could be a new camera or updates to the Pocket 4K and URSA Mini 4.6k G2, plus post-production gear. 2019 has been a good year so far for cameras and with IBC on deck for September in Amsterdam we are going to start getting a lot of product news and releases.

The stream is available on YouTube as well as on Blackmagic Design website. If you can’t watch it live we here at Newsshooter has you covered with updates to this article as they happen. Keep refreshing this page!

As the news unfoldes updates will be posted here. Above you can watch Blackmagic’s streamed press conference.

This is big news! Today Blackmagic Design released a new Pocket Cinema Camera 6K that uses an EF mount with full electronics so Canon EF lenses will communicate with the camera for focus and iris control. IS lens support as well.

Above you can see the difference in sensor size compared to the BMPCC 4K.

BM are listing that the Pocket Cinema Camera 6K has 13 stops of dynamic range. It also has the same dual native ISOs of 400 and 3200 like the Pocket Cinema Camera 4K. When the ISO setting is between 100 and 1,000 the native ISO of 400 is used as a reference point. The ISO range between 1,250 and 25,600 uses the native ISO of 3,200 as a reference. If you are shooting in conditions where you have a choice between ISO 1,000 or 1,250, BM suggests closing down one stop on your lens’ iris so that you can select ISO 1,250 as it will engage the higher native ISO and provide much cleaner results.

What is interesting is that despite both cameras having the same claimed dynamic range, where those stops of dynamic range are allocated are not identical. Based on these figures provided by BM, the 6K version should have slightly better highlight handling than the 4K.

The new model will retail for $2495 US and is available now. B&H has it listed as shipping on Aug 12th.

The camera shares the same form factor as the BMPCC 4K. A lot of the physical attributes of the camera are the same.

As you can see, the layout of the buttons and connections is identical.

It has the same set of connections as the BMPCC 4K. The camera includes a full size HDMI connector for monitoring with support for HDR and clean 10‑bit output. There’s also a mini XLR connection with 48-volt phantom power for attaching professional microphones, a 3.5 mm video camera style microphone input, headphone connection, and a professional locking DC power connector. The USB‑C connection lets you connect and record directly to your media disk.

Just like the BMPCC 4K, the 6K version has four built-in microphones that BM claims have an extremely low noise floor and are shock and wind-resistant.

The new camera uses all the same accessories as the Pocket 4K making it a little easier to switch too. The front of the camera or the lens mount itself is bigger to accommodate the larger S35 sensor and for the use of native EF lenses , however, the body itself looks to be identical. This is great for existing owners to use the Pocket 6K with cages you already have.

The biggest difference apart from the sensor size is the addition of Canon EF mount. The rationale for going with an EF is so that the camera becomes compatible with the largest range and most popular lenses in the world. If you already use EF lenses on other cameras such as DSLR, URSA Mini Pro or even the original Blackmagic Cinema Camera, you don’t have to outlay any money.

If you are an owner of the BMPCC 4K and have invested in MFT glass, you may not be particularly happy that BM has now chosen to go with an EF mount, especially if you are considering upgrading.

I’m in two minds as to whether EF mount was the way to go. Yes, it gives you a good choice of glass, but so do a lot of other mounts through the use of adapters. For instance, the MFT lens mount on the 4K model can be adapted to PL, C, EF or other lens types. With EF you are stuck.

In saying all of this, I personally like the idea of the S35 sensor with EF mount as MFT isn’t my favorite.

As far as auto focus is concerned. All BM has said is: When using a compatible auto focus lens with your camera, press the ‘focus’ button once to auto focus. By default the lens will auto focus in the center of the image, however you can select an alternate auto focus point by tapping on the LCD screen in the area that you want to focus. Double press the focus button to reset the focus point to the center of the screen.NOTE It’s important to know that while most lenses support electronic focus, some lenses can be set to manual or auto focus modes. In this case you need to confirm your lens is set to auto focus mode.

There is no mention of continuous auto focus, and it may well be that the camera can only do one touch auto focus. If you are expecting the level of auto focus performance you would get with Canon’s DPAF, you are going to be disappointed.

The Pocket Cinema Camera 4K has an ‘Image Stabilization’ option to enable or disable image stabilization on lenses without a physical switch. Given the 6K has an EF mount, we assume that Canon IS will be supported, but this hasn’t been confirmed.

There have been no updates to the LCD monitor. It is the same LCD that you will find on the BMPCC 4K.

BM is certainly giving users a lot of options when it comes to what resolution and frame rates you want to shoot in.

You can also shoot still photos at 21.2 megapixels.

The Pocket Cinema Camera 6K also has the timecode feature that allows the camera to be jammed with timecode using the 3.5mm audio input from a device like the Tentacle Sync to utilize the new multicam features in Davinci Resolve 16.1. The camera will auto-detect the signal and set the timecode. The timecode isn’t as accurate as the URSA Mini Pro and will drift over time however the feature is very handy if you need timecode sync.

Speaking of storage rates, above you can see a comparison chart that shows you how long you can record for using the BMPCC 4K and BMPCC 6K at their maximum resolutions and frame rates.

The Blackmagic Pocket Cinema Camera features built-in CFast and SD UHS‑II card recorders, and a USB‑C expansion port for recording directly to an external media disk. You can use regular SD cards for HD or higher performance UHS‑II and CFast cards for native 4K or 6K when using Blackmagic RAW. You can capture over an hour of full-resolution 6K material on a single 256GB SD UHS‑II card. The ProRes and Blackmagic RAW files work with all video software. You can even mount the media cards on your computer and start editing directly from them using the included DaVinci Resolve Studio software.

Each camera provides LUTs that are specific to the sensor. The built-in LUTS for the BMPCC 4K are not exactly the same as those found in the 6K version.

Will, the camera get hot? I’m sure it will as the sensor is larger. Hopefully, it won’t overheat. The Pocket 6K shares the same Blackmagic Generation 4 Color Science making it a good b-cam to the URSA Mini 4.6 K cameras since owners will most likely want to use it with them especially the with the new Timecode jamming feature.

As for the Pocket 4K delivery issues Grant mentioned BMD is working hard to get orders filled. I mentioned the Pocket 6K expected availability on B&H is August 12th and I would expect a lot of orders to be placed today. It would be good if BMD can get production up and ready for the new camera as people don’t like to wait for months to get their cameras.

All in all, it looks to be a very interesting release especially with a larger S35 sensor and electronic EF mount. I’ll be keen to try one out.

But wait… There is more.

DaVinci Resolve 16.1 Remains free with Studio being the paid version.

That’s a wrap! Are you as surprised as I am? I had a feeling the Pocket 4K would get the update and I’m glad it has an S35 option as I feel it is a much better fit for DP’s that already own a lot of full frame and APS-C lenses.