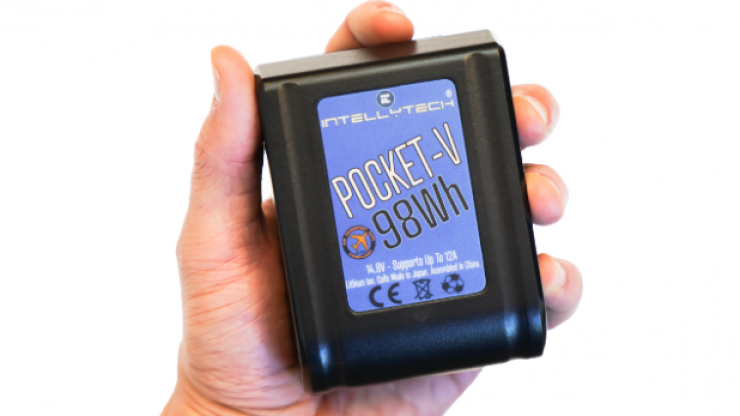 Intellytech has announced the Pocket-V 98Wh, 14.8V, V-Mount battery. We have been seeing a lot of batteries getting shrunk down in size, while still maintaining decent capacities. Intellytech is now jumping on that miniature V-lock battery train.

The Pocket-V can be used on cameras, lights, monitors, or anywhere else that requires power from a V-mount battery. The battery can support up to 12A which is pretty impressive as most other micro-sized batteries can only support up to 6A, thus limiting their capable power options due to their low power output.

USB & D-Tap Ports are both included for external power sources. Additionally, an LED Indicator is located on the side to show the remaining battery life.

By using an optional Pocket-V Dual Plate, you can stack two Pocket-V’s onto one plate, creating a 196Wh Battery. This is a good option for the traveling cameraman that need to fly with batteries under 100Wh, but wants to use higher capacity batteries with longer run times.

More and more micro and mini V-lock batteries are starting to enter the market. Here are some of the other 98Wh offerings available: