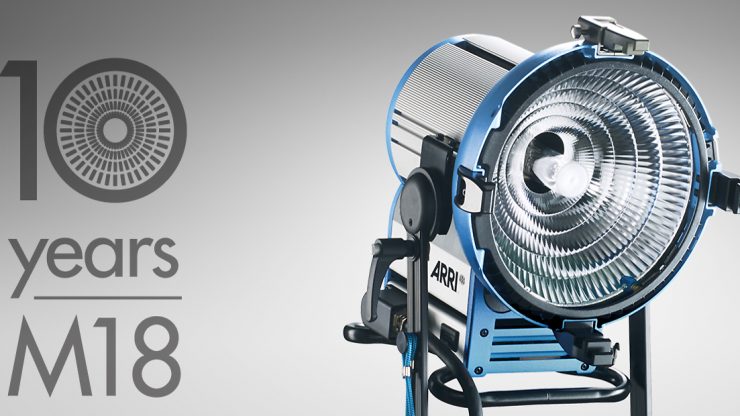 ARRI’s M18 daylight lamphead has been used on film sets worldwide for the past ten years and to celebrate ARRI has made a limited special anniversary edition that will be available in August.

The special edition of the fixture will be limited to 500 units. The lampheads, printed with the anniversary logo on the housing, will be ready for shipment starting in August. Now just to be clear, there is nothing different about this version of the M18, it just has a different logo.

The M18 was first shown at IBC in 2009. The extremely compact, powerful 1,800 W daylight lamphead combines the optical system of the ARRIMAX—which received a Scientific and Engineering Award from the Academy of Motion Picture Arts and Sciences—with the design of the True Blue Series.

Since its launch, the M18 has enjoyed great popularity and has become an integral part of almost every film set in the world. It has been used on feature film productions such as “Dunkirk” and “Sauerkrautkoma” as well as for the series “Dark,” “Parfum,” and “The Alienist.”

Even after ten years, no significant changes have been made to the M18. This is a testament to just how good the original design was. With the same size as a 1,200 W lamp with a parabolic reflector, the M18 provides around 70 percent more light output while maintaining the same color quality. The M-Series M18 fixture is adjustable from 20° to 60° and, like all M-Series luminaires, does not require any drop-in lenses. Operation is possible without a generator almost anywhere in the world using household plugs.