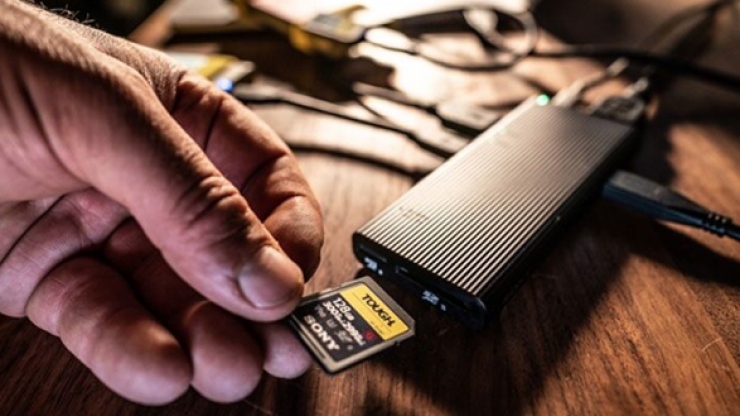 Sony has announced the MRW-S3, which they claim is the world’s fastest UHS-II SD/microSD card reader and USB Hub with USB 3.1 Gen 2. It also has up to 100W USB Power Delivery (USB PD) and HDMI output capability support.

The MRW-S3 is a one-stop solution for quickly and reliably transferring data.

The UHS-II SD and microSD card reader can handle everything from high-resolution RAW images to 4K video files.

The MRW-S3 is also the fastest USB Hub supporting USB 3.1 Gen 2 and provides high-speed data transfers of up to 1000MB/s.

In addition, the MRW-S3 can receive up to 100W USB Power Delivery (USB PD)[2] to ensure stable and reliable connections with USB devices. Users can be notified by the USB power level indicators if each port is ready to be connected at max power supply levels, eliminating worries of sudden disconnection due to poor power management.

The MRW-S3 has an HDMI output which can support signals up to 4K 30p. You can connect it to external monitors without the hassle of carrying around extra adaptors or sacrificing ports on your computer.

The USB Hub has an aluminum body with a wave surface to prevent scratches. The MRW-S3 weighs 95g and comes with a detachable USB-C to USB-C cable. This cable also can be used for connecting to USB 3.1 Gen 2 devices or to a USB PD AC adapter up to 100W, thanks to its embedded eMarker.

The SF-M TOUGH specification SD card is claimed to be the world’s toughest UHS-II SD card that is shockproof and has the highest-grade waterproof and dustproof levels.

The cards have data transfer speeds of up to 277MB/s read and 150MB/s write. Sony says that when used with the MRW-S3 USB Hub, backups are swift and buffer times reduced, resulting in a highly optimized workflow.

Also, the new conventional UHS-II SD card “SF-E” series follows to provide users with a wider range of choice. It has fast transfer speeds of up to 270MB/s read and 120MB/s write. The cards are V60 rated.

Both the SF-M TOUGH specification SD card and SF-E series include file rescue software to recover accidentally deleted data and photos.
Both series will be available in 64GB, 128GB and 256GB capacities.

The MRW-S3, SF-M series and SF-E series will be available from Autumn 2019. There is currently no information regarding pricing.