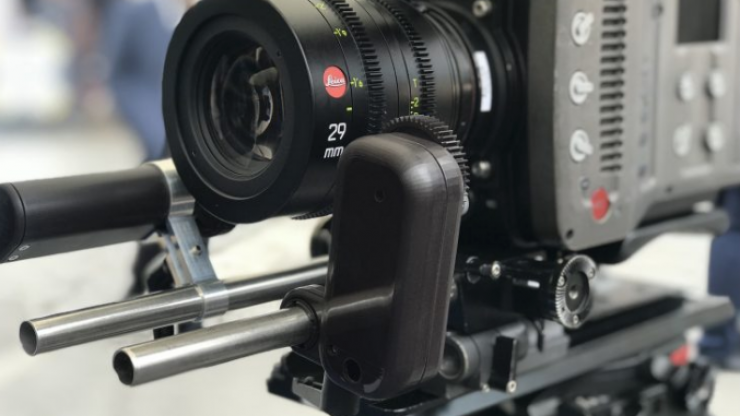 Moxie is a wireless lens control system that has been designed to deliver unmatched value by providing professional-grade quality and performance at an accessible price. Moxie allows you to control focus, iris, and zoom using a smartphone or handheld controller.

We first saw Moxie at Cine Gear earlier this year and now they have officially launched their Kickstarter campaign.

Essentially, Moxie is a wireless motor that is controlled by an iOS app. It’s not the motor that makes the Moxie unique it’s the ability to use multiple keyframe points so you can not only set marks between focus points, but you can also record and replay focus transitions for consistent shots over multiple takes.

You can also program the system to make focus, iris, or zoom transitions at various time intervals.

​Like a lot of other wireless lens motors, Moxie uses an all-in-one design so there is no need for an external control box.

The Moxie doesn’t have an inbuilt battery, which I personally think is a mistake. The system is powered using a Lemo cable. What you can’t see in the demo is that another version of the Moxie is actually turning the lens and that is connected up to the camera to get power.

For an ‘affordable’ wireless motor this doesn’t make that much sense to me. A good proportion of users buying similar systems are often using cameras that don’t have Lemo power outputs.

Moxie can be configured for use with up to three motors to control focus, iris, and zoom from a single mobile device using the MOXIE App.

If you don’t want to use the app, Gravity Labs will have an optional 3-axis MOXIE Controller if you prefer a more traditional user interface.

It will face stiff competition

While I like the concept behind Moxie, it is going to be up against stiff competition from affordable systems such as the Tilta Nucleus-Nano and the Moza iFocus.

The wireless follow focus market is already crowded and unless you can make something that is not only exceptionally good, but that also has features no one else has, you will face an uphill battle.

What you see in their video is only a prototype. Gravity Labs has leveraged rapid prototyping technologies (like 3D printing) in order to get to this point in just under five months. They claim that the final product will be injection moulded out of a high-quality, high-strength, low-weight material (such as polycarbonate).

​On the Gravity Labs Kickstarter campaign, you can get a single Moxie motor for $600 USD. This is $100 USD more than what we were told at CineGear.

Like any crowdfunding platform, there are never any guarantees that you will ever receive the product you are backing. Here at Newsshooter we always advise caution when backing any project.

Gravity Labs is also working on thumbwheel and handheld controller for the system.