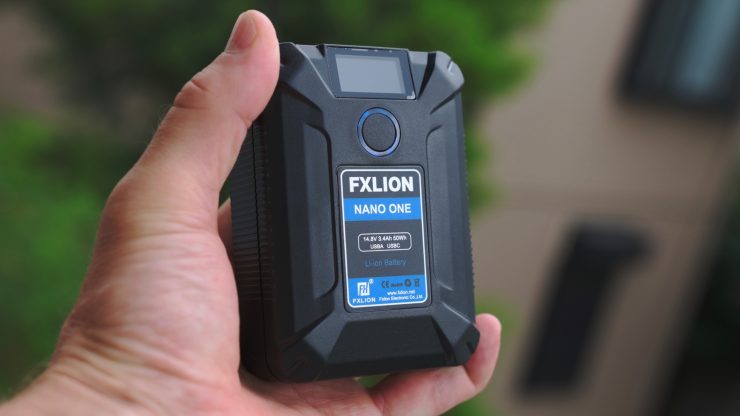 The FXLion Nano One is a tiny V-mount battery available in a 50Wh version that weighs only 310g (10.9oz).

The Nano One is a really useful addition to your bag – you could use these to power everything from your lights to your computer. And as well as their small size, if you’re on location there’s no need to take a bulky V-mount charger with you.

We first saw a prototype of the battery at NAB earlier this year, and I have to admit, it was one of my favorite products from the show. Now that it is about to ship I wanted to put the FXLion Nano One to the test to see if it can live up to expectations.

The Nano One comes with D-Tap, USB-A, Micro USB, and USB-C ports, which is remarkable given how small the battery is. With so many ports you have a lot of flexibility to power a range of products.

Below are the specifications of the various ports:

Having all of these connections also means you can charge the NANO ONE from a range of options.

The NANO ONE has a LCD display that shows you the battery voltage, how much battery life is left and also the power draw on the USB and USB-C ports.

Power your Mac remotely in the field

The FXLion Nano One allows you to plug in your laptop and use the battery to power your computer. This is extremely handy if you’re out and about and don’t have access to mains power.

Not only can you charge your Mac from the Nano One, you can also charge the battery using your Mac power supply. For traveling this is ideal because you can use a single charger for two jobs.

There have been numerous times over the years where I was on location doing live crosses and the battery on my MacBook Pro would run out because there was no access to any power.

I could have really used a product like the FXLion Nano One back in those days.

This is perhaps my favourite feature of the Nano One.

This is not the first time you have been able to power your Mac off a v-lock battery, but as far as I know, it’s the first battery that can do it directly without the need for any battery plate.

Years ago I had a Hawk-Woods VL-MAC2, which was designed to allow broadcast production personnel to run their Mac laptops from the batteries already being used out in the field. This was ideal for use in remote locations, or when you were away from a mains supply for a prolonged period of time.

The adaptor came with a MagSafe2 plug to XLR cable. This allowed the voltage of any inserted battery to be stepped-up to 19.5V. This product was discontinued by Hawk-Woods many years ago and for some reason, they haven’t made a newer model that works with today’s Macs.

V-mount/Gold-mount batteries have been getting smaller and smaller recently but the Nano One is one of the smallest we’ve seen – comparable to the Hawk-Woods VL-M50.

As a comparison, the Hawk-Woods Mini V-Lok 14.4V 50Wh Li-Ion Battery weighs in at 300g, but it doesn’t have any ports or a display like the NANO ONE.

Above you can see its size in comparison to a Anton Bauer Dionic 150Wh.

As a further comparison, here is what it looks like next to an iPhone 7+.

The battery is well made despite being so light. The button, ports, and LCD display are all well designed and thought out.

I like that the Nano One has nice strong protective covers over the ports.

I also like the tactile grip that is on either side of the battery. This makes it easy to hold onto which is important when you are dealing with a small product.

The battery also firmly secured onto any v-lock battery plate and it doesn’t wobble around or move.

In a clever design move FXLION gives you four ways to charge your Nano One:

*The USB PD specification supported by USB-C has a power delivery of up to 100 watts. It’s bi-directional, so a device can either send or receive power.

As far as charging times are concerned, it really depends on what you are using to charge the battery. If you need to charge your battery quickly then it’s best to use a normal V-lock charger.

I also found that I could charge the battery via another V-lock battery as well as by using my DJI Mavic Pro 2 charger, via the USB port that is for charging the remote control.

I did a few tests to see how quickly the battery charged via the USB-C input, as well as on a regular V-lock charger.

You can take the battery onboard airplanes without worrying – they’re under the threshold for carrying in hand luggage. You’ll be able to take up to 20 50Wh batteries with you on most airlines.

The low weight, small size and the ability to create a larger capacity battery by placing 2 of the 50Wh NANO ONE’s onto a dual V-lock battery plate make these batteries ideal for travel. As they can be charged in a variety of ways you also don’t necessarily have to travel with a large and heavy V-lock charger., although USB and USB-C charging is significantly slower.

I found myself using the NANO ONE for lots of different reasons. It’s so small and lightweight that it is easy to just carry around with you.

Whether I needed to power a small light, a monitor, or even charge my cellphone it was always on tap.

What I found myself doing quite a lot was just keeping the battery on the NANOL0 plate that has a clip on the back of it. This way I could just keep it on me when I was shooting.

There were several times when I was shooting that my camera battery was getting low and my camera assistant wasn’t close to me, but I needed a battery. In this instance, I would just grab the NANO ONE and swap it over while I waited for my camera assistant to bring me a larger battery.

It was also nice to know that I had a small battery on me that could power my camera (even if it was just for 20 minutes or so).

I also found myself using the NANO ONE to keep my Mac charged when I was out in the field without access to mains power. It is never a nice feeling to see you laptop battery getting low if you are doing a live cross or sending files back from a remote location. Having the ability to keep the laptop powered up is a big deal.

Most MacBook’s and MacBook Air’s internal batteries are around about 50-60Wh, which gives them a similar capacity as a 50Wh camera battery. With a NANO ONE and a fully charged internal laptop battery, you should get around double the normal run times you are accustomed to.

The battery is also great for powering low draw lights such as the Rotolight AEOS.

Nano One, double up

If you take two of the Nano One 50Wh batteries you can use them on the NANOL2S optional dual battery plate to create a larger capacity battery.

The dual battery plate is well made and it also has 3x D-Tap outlets on it for powering additional accessories.

What I found is that not only could you use the FXLion NANO ONE batteries on the dual plate, but it also worked with the Hawk-Woods Mini V-Lok batteries as well.

There is also room to use one normal sized V-lock battery on the plate as well.

Currently, the battery plate discharges both batteries at the same time but FXLion is looking into a solution that will allow you to hot-swap batteries for extended runtimes.

A whole NANO ONE Ecosystem

What I love about the NANO ONE is that FXLion hasn’t just made a battery and said, that will do. Instead, they developed a whole ecosystem around the battery.

Along with the battery and the dual battery plate, there is the following:

All of these components greatly increase the functionality and versatility of the NANO ONE. I especially like the NANOL01 and the NANOL03.

The NANOL01 is great for attaching to light stands etc. or even a pan handle on a tripod.

The NANOL03 is tiny and makes for a really nice option if you want to attach a small v-lock battery to a camera cage or to the back of a monitor.

There really isn’t that much competition for the NANO ONE. No other battery on the market offers quite the same functionality in the same form factor. Yes, there are other batteries such as the Hawk-Woods Mini V-Lok 14.4V 50Wh Li-Ion Battery that are the same size and capacity, but they don’t have any of the inputs and outputs of the NANO ONE.

The closest competitor would have to be the Mini PAGlink 50Wh Li-Ion battery packs which are not shipping yet. The PAG MPL50 batteries feature 12V and 5V outputs. Built into the battery are a fixed D-Tap output and a removable 2A USB, that can be swapped for a Lemo, Hirose or another D-Tap. This allows the power source to be configured with precisely the outputs you need. The 50Wh Mini PAGlink batteries measure 110 x 85 x 20mm (4.35″ x 3.35″ x 1″) and weigh just 350g (12oz).

The advantage the PAGlink batteries have over the NANO ONE is the ability to piggyback the batteries together. You don’t need a battery plate to do this.

The FXLion Nano One 50Wh battery will be shipping shortly for $179 USD. There’s no price or availability yet on the 100Wh version. Currently, FXLion doesn’t plan on making higher capacity versions of the Nano One.

There is no other way to sum it up than to say that the NANO ONE is probably going to end up being one of my favourite products of the year.

I love products that are multi-versatile and solve real-world problems. Having a tiny v-lock battery that I can use to power a camera, light, monitor, smartphone, tablet, external recorder or a portable Mac computer is ideal.

There are so many ways you could use the NANO ONE and that is the mark of a good product.

Not only is it affordable, but it is also well made and designed.

FXLion Nano One at B&H Photo