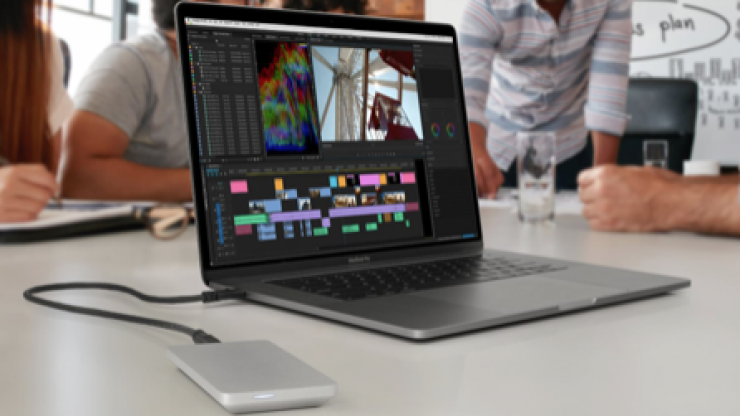 OWC has announced the Envoy Pro EX, which they claim is the world’s fastest USB-C portable drive.

The Envoy Pro EX has speeds of up to 980MB/s, which is pretty impressive for a bus powered, compact USB-C drive. Not only can you copy and back up files in the field quickly, but you can also use the drive as an external USB-C recorder with selected cameras such as the BMPCC 4K.

The claimed 980MB/s speeds, just pips the Glyph Technologies Atom RAID 2TB USB 3.1 which has a claimed speed of up to 950 MB/s.

The Envoy Pro EX series was previously only available in a USB 3 version, and the speeds were limited to 400MB/s.

The Envoy Pro EX is housed in an anodized aluminum enclosure, and OWC claims that it is 100% dustproof with an IP67 waterproof rating that’s certified to survive 30 minutes in 1 meter of water. It is also claimed to be able to operate in temperature extremes from freezing to 158 degrees Fahrenheit.

The drives are similar in size and they weigh about the same as an iPhone.

The drive is bus powered, and with no moving parts, the Envoy Pro EX also runs completely silently.

The Envoy Pro EX is available in the following capacities:

Here are some other bus-powered USB-C SSD drives:

If you want something even faster, you could just get an OWC Envoy Pro EX Thunderbolt 3 SSD drive and get speeds of up to 2800MB/s (read).