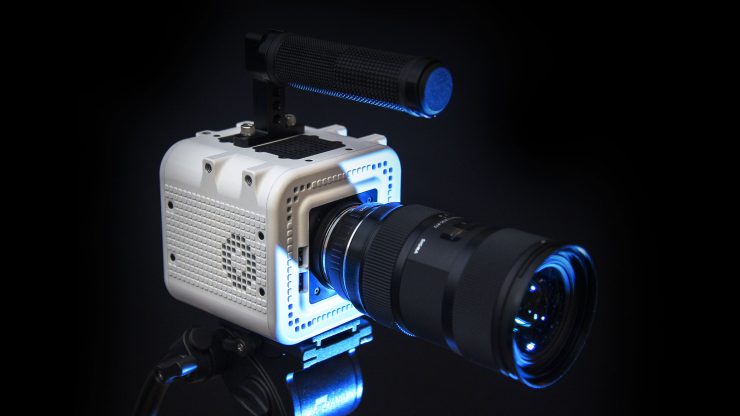 Meet the OCTOPUS CAMERA from Octopus Cinema. The camera is still in the very early stages of development and has been built from the ground up to be an open platform with removable and upgradable parts.

The camera uses non-proprietary hardware and software. An optimized Linux version runs on an 8-core i7 Intel CPU. The SDK allows for full utilization of this CPU. For example, a Unity3D AR project containing CG assets can be deployed to the camera allowing for real-time camera-tracked visualization of VFX without any additional hardware.

Octopus Cinema is currently working on two different versions of the OCTOPUS CAMERA. One will utilize a 5K full frame sensor, and the other a 4/3″ 4K sensor.

Unlike a lot of digital cinema cameras, the OCTOPUS CAMERA is not tied to a single image sensor. Instead, the camera supports a range of image sensor modules from third-party sensor module manufacturers. At the moment the key sensor module developer is a company called XIMEA who specialize in imaging modules.

Not being tied to a particular sensor is a very interesting concept, and while most camera manufacturers are very reluctant to disclose where their sensors come from, Octopus Cinema looks to be very upfront with what sensors their cameras will use.

The current prototype cameras will use XIMEA’s 1.1-inch and Full Frame image sensor modules. XIMEA provide a range of high-performance imaging modules which can be interchanged allowing the OCTOPUS CAMERA to have a fully upgradable image sensor.

All sensors are capable of full losslessly-compressed 12-bit RAW at 4K 30fps. 10-bit HEVC and lossy RAW allow for higher frame rates depending on the sensor. Additional recording formats can be added trivially with the SDK through Libavcodec or 3rd party libraries.

As far as recording media goes, the camera has SSD and CFast 2.0 options using the SATA III and USB3 ports connected to the main board.

The camera measures just 110 x 110 x 110mm, and it weighs in at 900g. It is made out of CNC Milled Aluminium in a gloss white finish. It is designed and assembled in London, UK.

I reached out to Russell Newman, the Lead Engineer/Founder of Octopus Cinema to ask him some questions about the cameras.

Q. How long have you been working on the camera?
The camera has been in development in some form since the beginning of 2018.

Q. What was the inspiration behind building Octopus?
My background is in 3D graphics and software engineering, and I had always a strong interest in cinema technology – I had until recently owned almost every camera Blackmagic Design released. Blackmagic’s success and projects such as the Digital Bolex made me realize that the days of pro-quality footage being reserved for the likes of a £10k+ Sony camera would be soon gone.

Q. With so many digital cinema cameras already on the market, what makes Octopus different?
The open nature of the product I believe sets it apart from others – all the components are documented and available to upgrade or replace. Additionally, some of the image sensor characteristics/options are also hard to find from other products – namely native monochrome/IR capabilities and global shutter.

Q. What features and specifications does Octopus offer?
Recording wise, the camera records lossless 12-bit RAW 4K up to 30fps and up to 60fps with 10-bit HEVC. This is, however, a base starting point. We would like to build a community for developing additional features available in an open source environment.

For example, the HEVC encoding uses the libavcodec library which is part of the ffmpeg library. We could then add support for encoding any codecs which ffmpeg supports – providing they’re efficient and stable enough.

The sensors we’re aiming to support at the moment are 1.1-inch (4K) and Full frame (5K). Both of these are global shutter with color and monochrome variants. The dynamic range falls between 12 and 13 stops.

Will the camera have any audio capabilities and any plans for any type of modules to support SDI/Timecode etc.?
The camera body has 4 USB3 ports which we intend to use for digital audio recording and supporting new add-on modules – either third-party or developed ourselves.

We could add SDI output through a separate module connected via USB3, but for the time being the device only supports natively two HDMI2.0 outputs.

Timecode can be added through third-party products which can receive/send timecode information via USB:
http://www.ese-web.com/es71.htm

It would be our aim to support these products should it be on many peoples wish lists.

Timecode can be added through third-party products which can receive/send timecode information via USB:
http://www.ese-web.com/es71.htm

It would be our aim to support these products should it be on many peoples wish lists.

We believe USB audio recording to be a good solution as it defers the A/D conversion to dedicated and isolated audio hardware.

Q. When do you hope to have Octopus available to purchase?
We are looking to have the 1.1-inch model available by Q3 2020.

Below are the specifications that we have so far:

Who is the OCTOPUS CAMERA aimed at?

According to Octopus Cinema, with the increasing competition in the cinema camera market, the primary goal of the OCTOPUS CAMERA is to fill a gap in the market where users require a specific product for a specific application. These specific features include native monochrome sensor imaging and a fully open SDK to extend and embed custom behaviour in the camera.

The camera is not being targeted as a competitor against most other digital cinema cameras that are already on the market.

It’s not all black & white

Octopus Cinema believes that black and white cinematography is a powerful medium which is gaining a resurgence and that their native monochrome sensors provide resolving power and sensitivity noticeably beyond their color counterparts.

According to Octopus Cinema, fine detail in shots is preserved with no moiré or artifacts at all – even when pixel peeping.

Additional abilities of monochrome sensors include downscaling of the frame vertically by 2 while preserving the full-width resolution. This doubles the maximum frame rate and halves the frame’s RAW file size while the vertical resolution reduction is claimed to be not very noticeable.

Below you can see some more early monochrome clips from the camera.

The CMOSIS CMV20000 sensor being used in the 5K full frame version of the camera has been around for a while.

The CMV20000 is a global shutter CMOS image sensor with 5120 by 3840 pixels. The image array consists of 6.4μm x 6.4μm pipelined global shutter pixels which allow exposure during readout while performing CDS operation.

The image sensor has sixteen 12-bit digital LVDS outputs (serial). The image sensor also integrates a programmable gain amplifier and offset regulation. Each channel runs at 480 Mbps maximum which results in 30 fps frame rate at full resolution. Higher frame rates can be achieved in row-windowing mode or row-subsampling mode. These modes are all programmable using the SPI interface.

All internal exposure and readout timings are generated by a programmable onboard sequencer. External triggering and exposure programming is also possible. Extended optical dynamic range can be achieved by multiple integrated high dynamic range modes.

Below are some of the key features of the CMV20000:

The sensor was originally developed for industrial applications. The CMOS image sensor, which features a global shutter function and a 3.45 μm pixel that is claimed to be the smallest class in the industry is said to achieve high picture quality, high resolution, and high-speed imaging without distortion.

The sensor is equipped with a global shutter-compatible pixel. It also utilizes column-parallel A/D conversion technology that enables frame rates of up to 68.3 frame/s (ADC 8-bit).

When can you buy one?

The cameras are still a long way off being ready for market. They aren’t scheduled to be released until the 2020 northern hemisphere summer. There is currently no indication of pricing.

Like any camera under early development, there are never any guarantees that it will ever get to market. Making a camera is not an easy task and we have seen many companies try and fail in the past. It will be interesting to see how the Octopus Cinema Camera develops moving forward.

The OCTOPUS CAMERA is certainly an interesting camera, but it’s also being targeted at a very niche market. In saying that, I like that the camera is using non-proprietary hardware and software and that it has the ability to support a range of image sensor modules from third-party sensor module manufacturers.

This is not the first time we have seen open source cameras being developed where the sensor, hardware, and software can be customized. The AXIOM Beta provides users with the ability to swap or upgrade sensors at any time. The camera uses powerful internal components, custom-built printed circuit boards and plugin modules, FPGAs and an onboard Linux operating system.

It is probably naive to think that we won’t see more cameras along these lines being developed in the future. Having the ability to swap out sensors and customize the hardware and the software to meet your own individual needs is certainly something that is likely to appeal to a lot of users.

What do you think about the OCTOPUS CAMERA? Does the ability to swap out sensors and change hardware and software appeal to you? Let us know in the comments section below.