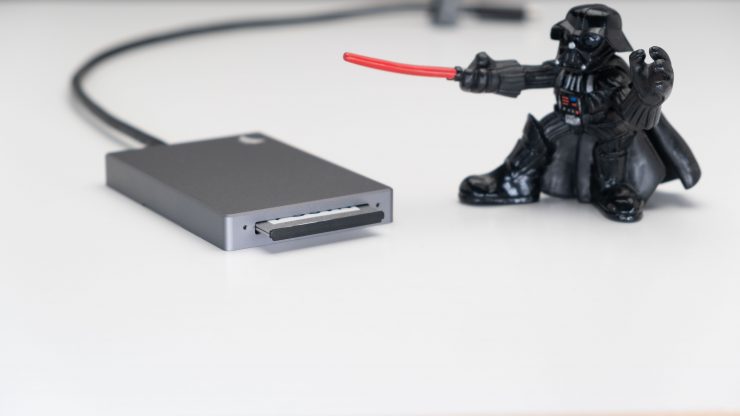 When it comes to card readers, not all are created equal. I learned the hard way with a Lexar CR1 USB 3.0 CFast reader that unformatted several CFast cards when used with a Mac. The issue is how the card gets ejected. After I offload a card, eject it and stick another in, it can corrupt the filesystem of the second card inserted. This is on a Mac OS system and I haven’t tested it with a Windows-based PC. I’ve had never had this happen with other card readers so the media isn’t the issue. Nevertheless, I don’t use the Lexar CR1 anymore and the problem is now gone.

Angelbird had a dual CFast reader that is now discontinued and is replaced with this solid built single CFast card reader. The reader comes in at 120 g or 4.2 oz. Like I mentioned, this thing is built like a tank.

While the build is impressive it does have a purpose. One is the weight keeps it from flopping over to its side like every card reader I’ve used. The Angelbird stays flat on your desk and doesn’t slide around when the two large rubber pads are fastened to the bottom of the reader.

When compared to the SanDisk it’s twice as long and the build is all metal as opposed to plastic. If size and weight are an issue the Angelbird CFast card reader might not be a good choice. I personally don’t have an issue with it.

The new CFast card reader is the first released with the “Solid Stack” design. The card readers can be stacked together. The SD card reader and other models are not released yet.

With a supplied velcro strap, the modules can be stacked to decrease clutter. If you are a media wrangler of DIT, this will be a nice setup.

On the bottom of the reader, it has a slight recessed edge that allows them to stack without sliding apart. When stacked, each card reader needs to be plugged in separately.

The reader includes a write lock switch near the connector to protect against accidental writing and prevents operating systems from adding files.

Angelbird uses a recessed connector for their SSD drives and has added that design to the CFast 2.0 reader. I like the secure connection, however, if you lose the included cable using a generic USB type C cable might not fit. All Thunderbolt 3 cables do fit inside the CFast reader.

A longer 9′ cable is available if needed and can be ordered from Angelbird or retailer that sells their products like B&H. The Angelbird 9′ cable cost $15.99.

To ensure compatibility for computers with only USB 3.0 connectivity Angelbird includes a USB-A to USB-C adapter.

I ran some tests using Blackmagic Disk Speed Test and compared it to the SanDisk CFast reader.

As you can see the speed isn’t much difference between the two readers however the build quality is much better with the new Angelbird CFast card reader.

I never thought a card reader could be a weak link in my workflow but I sure learned how important it is to use quality equipment that is dependable. Angelbird CFast and SD cards have worked flawlessly for me and the added build and stability of the new CFast reader is a nice addition for wrangling media plus a 3-year warranty is a nice bonus.

Card readers run the gamut when it comes to pricing. I didn’t even know you can spend $169.99 for one like the Sonnet dual CFast Thunderbolt SF3 reader.

The new Angelbird CFast reader retails for $64.90 USD and is available now. Check out Angelbird’s website for other products available and updates on future versions of the Solid Stack card readers.