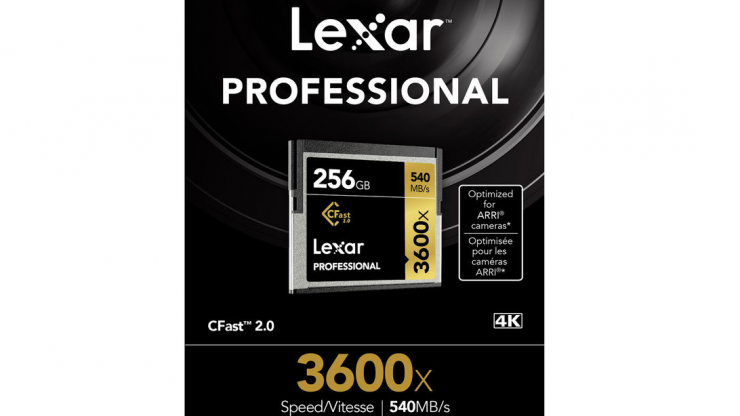 ARRI has sent out a service notification warning about the use of older Lexar 3600x Professional CFast 2.0 cards.

“Due to the information we have received during our regular market observance and our investigations, we have to take back our recommendation to use Lexar Professional 3600x CFast 2.0 cards for recording in ARRI cameras. The cards will continue to work in our cameras, but we cannot unreservedly recommend their use anymore.”

These are the problems noticed by ARRI

A CFast 2.0 card stops working after it was used for recording, making the recorded footage inaccessible. The problem can occur with one or more of the following symptoms:

I actually have one of these cards, because when I bought it back in 2016, it was the only 256GB CFast 2.0 card that was certified for use with ARRI cameras.

This particular card was was discontinued.

ARRI advises seeking professional help from a data recovery service, especially if a card represents a high production value, e.g. something that cannot be reshot.

It may be possible to salvage recorded data by cooling down the card and reading it at slow transfer speeds. Slow transfer speeds can be achieved by connecting a USB-3 card reader with a USB-2 cable. Please note that cards should only be cooled in a controlled, low humidity environment, as a card can be destroyed if condensation builds up on the inside.

It may be possible to temporarily reconnect defective soldering joints by applying soft pressure between the top and bottom lid.

Please note that too much force will cause fatal mechanical damage to the electrical assembly and render the card useless!

Note: The use of data recovery software is not required, as the problem does not affect the data integrity on the flash chips.

To do this you should contact your point of sales for details on the exchange procedure.

Please note that Lexar currently does not offer an alternative CFast 2.0 product that can be used in ARRI cameras.

ARRI does not want to give the impression that all Lexar cards are affected by this problem. Many customers have been using the Lexar 3600x CFast 2.0 cards for years without experiencing any problems. In fact, only a few users have experienced the aforementioned issue. Therefore, it would be premature to replace every card currently in use. First and foremost we wanted to ensure that our customers were made aware of this concern so they could identify a problem at its first occurrence and take the affected cards out of circulation immediately.