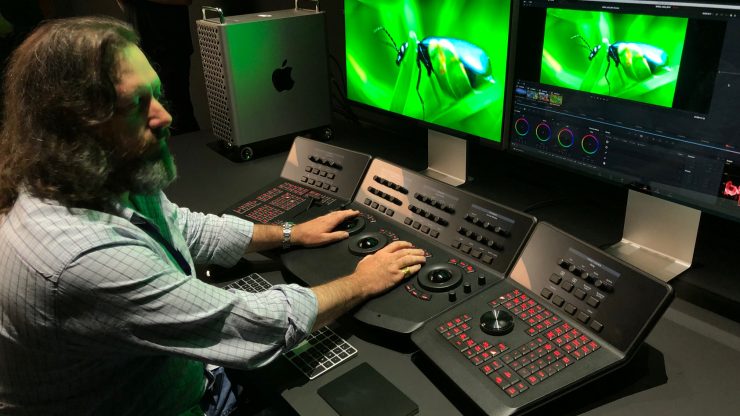 There was no secret that Apple has been working on a new, modular and expandable Mac Pro, they had actually said as much in an almost unprecedented hint at a future product. But Apple had a lot of ground to regain. Since their last expandable professional workstation many pro users have felt there’s been close to a lost decade, with many continuing to update ageing Mac Pro towers from 2010 or earlier.

This week at Apple’s annual WWDC in San Jose, all of that changed with the unveiling of the new Mac Pro.

Not only that but they also announced an HDR capable 6K Retina display, the Pro Display XDR to go with it.

Above you can listen to my podcast with Mike Seymour from FX Guide where we talk all about the new Mac Pro.

Above you can see a massive image gallery with photos from the event taken by Toru Hasegawa. These photos are not to be reused in any form without our expressed written permission.

After the WWDC Keynote, I was lucky enough to get a little hands on time with the top of the line, 28 Core variant of the new machine to get a sense of how it actually performs. The test machine was configured with 8K footage coming from a SAN in ProRes 4444 XQ into Da Vinci Resolve 16, with the Da Vinci Advanced Panel and with 2 of the XDR displays and a large 8K consumer TV running through a Decklink 8K Pro, then converted from SDI to HDMI. The 2nd XDR display was connected as a video display (rather than an extension of the desktop) directly via Thunderbolt 3. This is a major departure for Blackmagic Design, who have not previously allowed users to connect to monitors for full screen video via “computer connections”. This seems to be a reflection of the significance of these new XDR displays.

The demo footage was beautifully shot images of Africa, captured by Mark Toia on RED Monstro 8K cameras. Although RED has announced there will be accelerated support for R3D RAW files directly in FCPX and Resolve, that’s still a little way off and hence the 4444 XQ files we had to work with. While the ProRes 4444 XQ does not burden the system with the debayer processing, it’s worth noting that it is also that it is at a massively higher data rate than any of the REDCODE RAW options. By my calculations, that’s 848.5 MB/s in 8K 24p compared to around 300 MB/s in REDCODE 8K 24p

So what’s it actually like to work with 8K 12 bit footage on this machine? The truth is that it’s a complete non-event. Playback, adding and adjusting nodes all happens with the same smoothness and fluidity that I would expect from HD on an iMac Pro. Jogging and shuttling using the Da Vinci controller is so responsive it almost feels like an analogue system with direct control.

I didn’t get the chance to look into how the load was being distributed but the combination Radeon Pro Vega II Duo GPU’s and the Apple Afterburner accelerator card made the handling of the 8K footage a breeze.

The machine itself sits very neatly on the desktop, closer in size to an average PC desktop than to the old Mac Pro towers, yet still much more of a presence than the low-profile “trashcan” model.

The 6K, 32” Pro Display XDR is an absolute delight to use. With a sustained brightness of 1,000 nits and peak brightness of 1,600 nits they are well and truly into the true HDR spectrum and I think they are sitting in a real sweet spot with genuinely dramatic HDR capability while still being suitable for normal work in a normal environment. I’m looking forward to learning more about the various reference modes that the XDR offers. Apple describes reference modes for HDR, HD, SD and Cinema along with photography, web design and print. The displays I used appeared to be in HDR mode and responded beautifully to throwing the images into different areas of the color and brightness spectrums. Another thing that was great to see was the consistency between the displays. There was an FCPX workstation set up with the edit and then the same material in Resolve and across both the GUI and video monitors of both machines was absolute consistency of color and brightness. Apple has made huge advances in color calibration in recent years and although many colorists would scoff at the idea of using any “computer” monitor for grading, the XDR displays are really a whole new category of screen and a lot of people are in for a surprise when they see how good and how consistent they are.

I was also able to see both Pro Tools and Logic Pro running on the new Mac Pro. The Pro Tools system was set up with 6 Pro Tools cards, which highlights one of the other surprises of the new machine. There was some debate about whether it would have a single PCIe slot or multiple ones but the 8 slots in each variant of the machine is very impressive. With these 6 cards, Pro Tools was able to run a scene from How To Train Your Dragon: The Hidden World which had taken multiple Pro Tools systems to execute but now was happily running on a single system. With hundreds of tracks and a lot of processing going on, this was quite something to see. Not only that but the same machine was able to play the sync pictures in ProRes 4444, 4K at the same time!

Meanwhile in Logic Pro the same section of the film was open with the composer’s file. Working with software instruments on a grand scale. Once again the new Mac Pro wasn’t even breaking a sweat with this massive project running.

Back in FCPX, the 8K footage was so responsive that it was actually possible to add, remove and adjust effects on the footage while it was actually playing – including color corrections! The efficiency of this is really extraordinary.

This is not a machine aimed at everybody. Apple needed to demonstrate that they haven’t abandoned their high end professional users and the new Mac Pro does that in spades. For picture and audio facilities that have been waiting for many years to upgrade their main studio systems, this finally provides the processing power and the expandability to do just that. For anyone working with massively complex projects or very high resolution this machine makes things possible that simply weren’t possible or at least practical before.

Certainly the beginning of a new phase in the relationship between pro users and Apple.