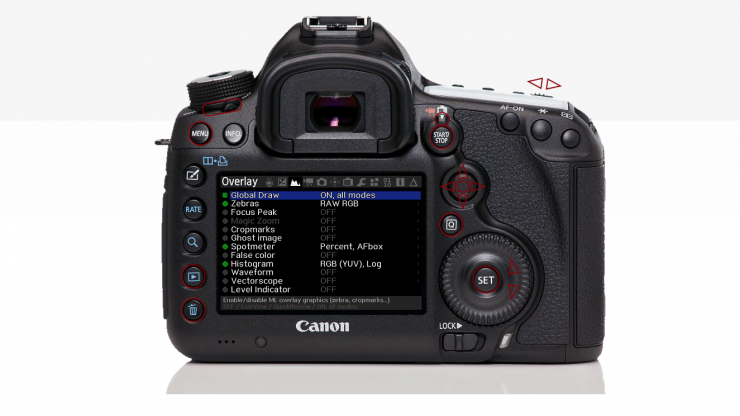 Magic Lantern is ten years old. Happy Birthday Magic Lantern! Here at Newsshooter, I thought we should pay our respects to a team of individuals that dared to be different.

A bit of history

In 2008 the Canon 5D Mark II changed everything. It was the first affordable full frame sensor camera capable of capturing video. It quickly became the go-to tool for budget filmmakers and it wasn’t long till people wanted to get more out of their cameras. Enter Magic Lantern.

Magic Lantern was originally written by Trammell Hudson in 2009 for the Canon EOS 5D Mark II after he managed to reverse engineer the camera’s firmware.

Magic Lantern is a software enhancement that offers increased functionality to Canon DSLR cameras. Magic Lantern created an open framework, licensed under GPL, for developing extensions to the official firmware.

Magic Lantern is not a “hack“, or a modified firmware, it is an independent program that runs alongside Canon’s own software. Each time you start your camera, Magic Lantern is loaded from your memory card. The only modification Magic lantern created was the ability to run software from the memory card.

Magic Lantern was and still is a free software add-on that runs from the SD/CF card and adds a host of new features to Canon EOS cameras that weren’t included from the factory by Canon.

Essentially Magic Lantern opens up functionality that is technically possible to run on Canon DSLR cameras.

Because installing Magic Lantern does not replace the stock Canon firmware or modify the ROM but rather runs alongside it, it is both easy to remove and carries little risk. The camera checks a “boot flag” in its re-writable memory, and if set, reads from a memory card to get the additional firmware routines. Each time the camera is started, there is an option to disable Magic Lantern.

Magic lantern is completely free. It doesn’t cost anything to download or use.

Why use Magic Lantern?

You may be asking why anyone would want to use Magic Lantern and mess around with their camera to change how it performs. Well quite simply, because they can.

Most cameras are a lot more capable and powerful than you may think. In some cases, cameras from manufacturers have had features or capabilities restricted solely by the firmware they are running. The majority of cameras being released today are a lot more capable than you may think, but that doesn’t mean camera companies are willing to give you the keys to the front door and turn the alarm off.

In saying this, companies have to make products reliable and stable and if an engineer thinks that a camera can’t do a particular function with a zero fail rate they are not going to implement that feature into the camera. Companies also have to protect other products in their line up and they also need to make money. Making a completely open source camera doesn’t make financial sense to a large corporation or company.

Magic Lantern offers a greatly improved feature set which turns Canon DSLRs into much more fully feature video cameras. You simply download the files to each memory card you use, pop it into the camera and load the new firmware. Then each time you start the camera it can automatically find the firmware on your memory card and reload it.

However, in my past experience, I have found it to be less than 100% reliable in critical conditions, with the occasional lockup that required me to reboot the camera by reinserting the battery. For this reason, I have stayed away from using it for the type of work I do where missing a key moment is not an option. My cameras need to be 100% reliable, end of story.

It is also technically going to void any warranty you have on the camera and there is always that slight chance that you could irreversibly turn it into a paperweight.

All that said it is amazing that a global team working together was able to add video features to existing Canon cameras.

Is this all legal?

Both USA and European laws allow reverse engineering for interoperability, without requiring the permission from the copyright holder (in this case, Canon).

Since Magic Lantern is not distributing any Canon code and they are just reverse engineering solely for purposes of interoperability, Magic Lantern does not run afoul of the law.

Magic lantern is keen to point out that they do not publish Canon code or any other copyrighted material – be it from Canon or from any other third party. The only information they publish is limited information about DSLR internals, with the only purpose of achieving interoperability. Reverse engineering is required to achieve interoperability because no public documentation is available to create software for Canon DSLRs.

Canon has never officially made statements about Magic Lantern.

What cameras are supported?

Here are the cameras that are currently supported by Magic Lantern.

Here are the cameras Magic Lantern are currently working on:

What does Magic lantern allow you to do?

Well, a lot! Below is a list of features that Magic Lantern adds:

The above video was shot by Tom Akerman using the Canon EOS 5D mkIII with various Canon L lenses.

The above footage was shot in Magic Lantern Raw format and color corrected with Davinci Resolve. A 5D MKIII, Sigma 50 mm f/1.4, and Canon 100 mm f/2.8 lens was used.

What does the future hold?

Magic Lantern will continue to press forward, adding more features and testing out other camera models.

No matter how you feel about running third party firmware on a camera, you have to give credit to Trammell Hudson and the team over at Magic Lantern. Not only did they give users of Canon DSLR cameras enhanced features and capabilities, but they also give away the product for free.

There is always going to a select few companies and people who were pioneers in our industry, and Magic Lantern is certainly one of those pioneers. Happy birthday Magic lantern and thanks for all you have done and continue to do.

You can find more information about Magic Lantern on their website.