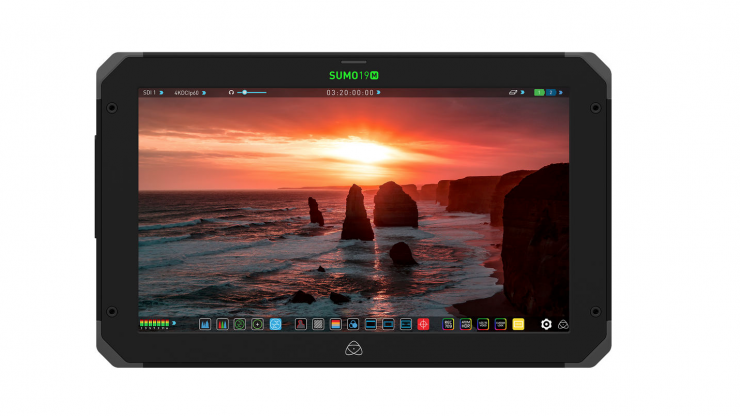 The SUMO19M has a 1200 cd/m² panel and it uses AtomHDR processing. On the rear panel, HDMI and SDI inputs can accept UHD and DCI 4K video signals. Both SDI and HDMI inputs can be cross converted to one another.

Unlike the SUMO19, the SUM019M cannot record, it is strictly a monitor.

The main use for the SUMO19M is as a director’s or client monitor. LUTs can be imported from a separately available SSD installed on a Master Caddy (a single Master Caddy is included in the box) to display a look that can be referenced further down the production pipeline to the final output. If you are working with an HDR delivery in mind, the AtomHDR processing uses the entire brightness range of the SUMO19M, allowing the entire latitude of log-encoded videos to be displayed without the washed-out colors or clipping that can sometimes be brought about by SDR (Standard Dynamic Rage) displays.

For post-production, the SUMO19M can function as a color-accurate studio monitor. Its claimed to be able to reproduce a wide color gamut that allows you to master your footage for current SDR standards like REC. 709, and HDR standards like HLG and PQ, without having to switch displays.

I haven’t personally used a SUMO19M so I have no idea how it actually performs.

Have you used or do you own an Atomos Sumo? What have your experiences been? Let us know in the comments section below.