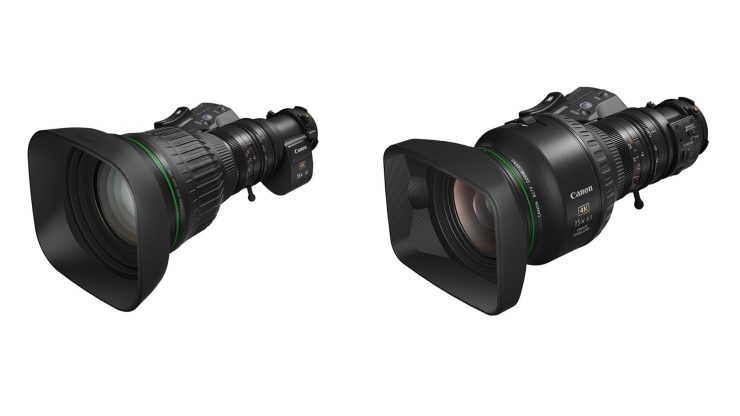 Canon has announced the snappily-monikered CJ18ex28B and CJ15ex8.5B 4K broadcast zoom lenses for 2/3″ UHD cameras. They’re designed to be instantly familiar to anyone who’s shot with a 2/3″ HD lens and to offer a lot of flexibility on location.

The CJ18ex28B offers an 18x zoom ratio, from 28mm at the wide end (not actually all that wide on a 2/3″ sensor) to 500mm at the long end. This increases to a whopping 1000mm when you use the built-in 2x extender. It’s aimed at doc, live event and wildlife shooters and Canon say the body has the same dimensions and weight as conventional HD lenses.

The CJ15ex8.5B covers a different range of focal lengths to the CJ18 – the CJ15 starts at 8.5mm and goes out to 128mm for an overall ratio of 15x. So you don’t get the same reach but what you do have is , and for action that’s happening closer to the lens.

Stabilisation is provided by Canon’s Vari-Angle Prism Image Stabiliser, designed to cancel out motion blur when filming on the move. The use cases Canon suggest include filming from a moving vehicle traversing bumpy terrain or when shooting cycling or running events. It’s the first time Canon have included this tech in a UHD portable broadcast lens.

No word from Canon yet on when you’ll be able to get your hands on these lenses – or how much they’ll cost! They will be on show at this year’s NAB so we’ll try and find out some more information then.