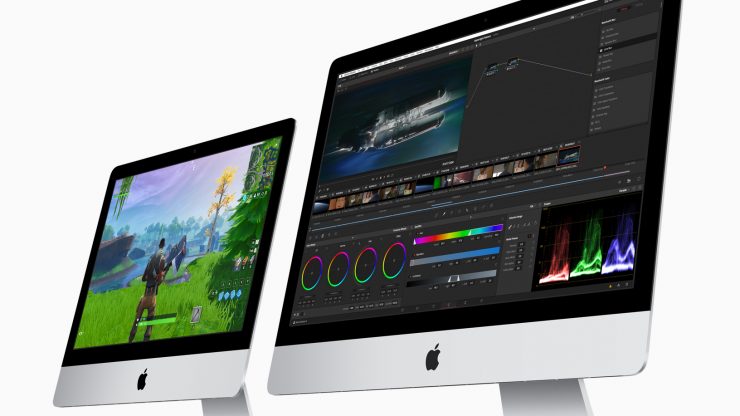 Apple has announced new iMacs. It has been 652 days (but who’s counting) since Apple last updated their popular all in one desktop computers.

Appearance wise the new iMacs look like every other iMac that has been released since 2012. The new models also use the same 4K and 5K displays as the previous generation.

Apple claims that the 21.5-inch 4K iMac has up to 60% faster CPU performance than the previous as well as up to 80% faster graphics.

The 27-inch 5K iMac is claimed to have up to 2.4x faster CPU performance and up to 50% faster graphics than the previous model.

If you are user, Apple claims that the 27-inch 5K iMac (8-core version) can export 3:1 REDCODE RAW to ProRes 422HQ 80% faster than the previous generation.

For even better graphics performance, Radeon Pro Vega GPU options are available. Vega is the same graphics architecture found in the iMac Pro. It utilizes High Bandwidth Memory (HBM2) which doubles the memory bandwidth to the GPU.

They also have Wi‑Fi and Bluetooth 4.2.

The new iMacs certainly offer a nice bump in performance, but if you are still looking for more from a Mac you are going to have to hold out for the next iteration of the Mac Pro.

Would you buy one of these new iMacs? What are you currently editing and color grading your material with? We would love to hear from you in the comments section below.