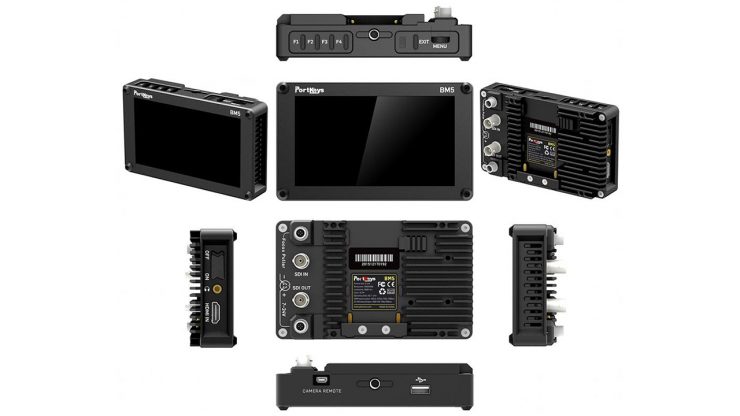 PortKeys is a company I’ve just learned about. They sent me info on a new BM5 5″ HD monitor that does more than most monitors. It can also interface with the camera’s menu and functions. Interesting right?

The list of cameras that interface with controls is the Z Cam, Sony, Blackmagic, Canon, and Panasonic. The type of features available are few but is working on adding more. For now, the options available that can be controlled vary based on the camera. Mainly focus, record, zoom functions and autofocus plus make changes to ISO. What’s not clear is how the functions are controlled as the monitor appears to be a touchscreen. It does have a glass safety cover mounted to the front. Also where the cable is plugged into each camera to enable control isn’t clear. Many hybrid mirrorless cameras have a multiport or LANC for just this type of control.

With cameras that have touch focus the PortKeys BM5 monitor could allow you to set aside the OEM display like the C200 that is bulky but has that nice touch to focus feature. I would like to have a 5″ version for that and be able to place it where I want as opposed to the front of the handle.

The 5″ BM5 monitor itself has some pretty good specs. A big one is the screen is 2000nit making it a true daylight usable monitor with a resolution of full HD 1920 x 1080. The screen has 8-bit color depth and a contrast ratio of 1000:1. The panel is a WLED or White LED

For IO the PortKeys BM5 includes both HDMI in and SDI with both in and out. I don’t believe it can support 4K, UHD singles as it’s not listed in the specifications. A LEMO connector is on the back for adding a Tilta NUCLEUS wireless controller. I’m not clear how the controller will interface with the monitor as this is still in development.

The monitor can be powered with a single Sony NPF type battery or with external power via a LEMO connector. It draws 13W. The monitor is also fairly light at 350 grams or 12.3 oz.

The BM5 looks to be a smaller version of the companies BM7, with the addition of camera control.

The BM5 has the same brightness, software, and screen resolution as the BM7.

Unlike a lot of the other competing monitors on the market such as the Atomos Shinobi, the BM5 does not look like it features a touch screen interface. PortKeys does make the LH5 which is a 5″ 1500nit monitor that does have a touchscreen.

The PortKeys BM5 is surprisingly affordable at only $399 USD and will be available in late April. These lower cost monitors always sound good on paper, but it remains to how well they hold up compared to offerings from companies such as Atomos and SmallHD.