At the Interbee 2018 show in Japan, Sony and DJI were showing a nice marriage between the Sony VENICE and the DJI Ronin-S.

Back in June, Sony introduced the VENICE Extension System. The lightweight (4 pounds with PL mount and 3 pounds with E-mount), tethered extension system allows the camera body to detach from the image sensor block with no degradation in image quality, from 9 or 18 feet apart, making VENICE a very flexible and versatile camera package.

The Extension System enables VENICE to become highly mobile and discreet for many mounting setups and filming scenarios including use with gimbals, handheld stabilizers, underwater and helicopter housings, and 3D/VR rigs, as well as in tight and unconventional spaces, such as in vehicles, on cranes or Russian arms. 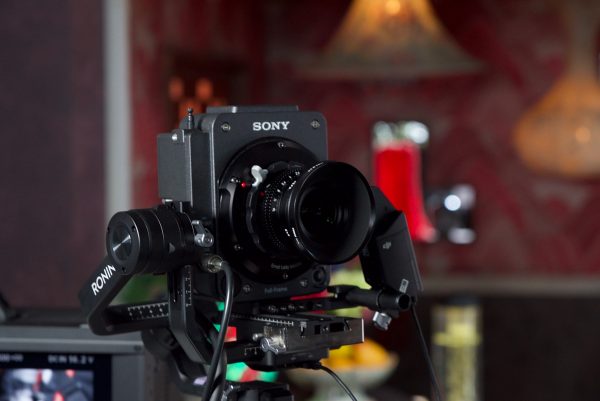 It’s easy to envisage the VENICE Extension System being used on cranes, helicopters and complex 3D/VR rigs, but what about on a simple one-handed gimbal? Well at the Sony booth at Interbee, that is exactly what was on display. The Sony Venice optical block was on a DJI Ronin-S and then tethered back to the camera body. I had a chance to try this combination out, and while it worked pretty well, it was still heavy and I don’t think you could realistically shoot for more than a few minutes without putting it down. You would also need someone with you to carry around the physical VENICE camera body.

James Cameron’s ‘Avatar’ sequels are amongst the first feature films to use the new VENICE Extension System. Cameron used this VENICE setup for creating a very light and small setup for 3D capture. With two of the small E-Mount optical block cameras in a beam splitter configuration, the rig came in at 30 pounds. The Venice camera with the tethered optical block is primarily being used in four Avatar sequels for live motion capture.

Moving forward it will be interesting to see if more camera companies adopt this concept of making the image sensor detachable from the camera body. It’s certainly more than just an interesting concept and allows filmmakers to be a lot more versatile with the shots they can create.