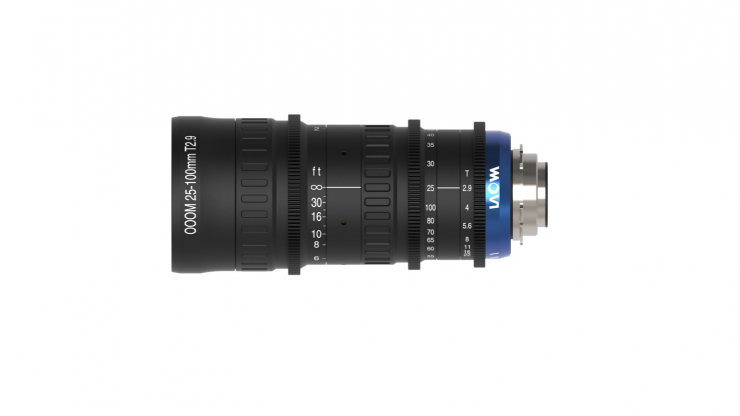 Laowa has always had a reputation for making unique lenses, and in somewhat of a shock, they are now making a 25-100mm T2.9 PL zoom lens. The lens has a 25-100mm range and is a constant T2.9 aperture. It features a stepless, t-stop independent aperture ring with an industry standard 0.8 mod /32 pitch gears.  The 270° focus rotation allows for precise focus pulls and the iris is clickless, enabling smooth iris transitions. Laowa is calling it a lightweight cinema zoom. At ~2.5kg (5.5lb) it is a reasonable weight for a PL zoom lens with this magnification. 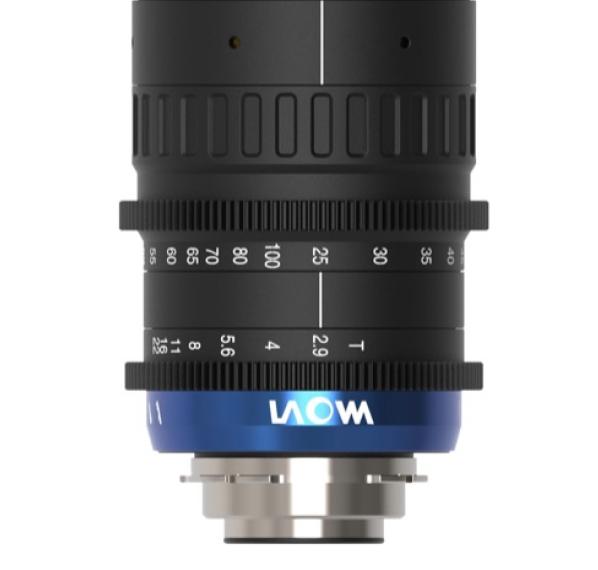 The 25-100mm t/2.9 Cine Lightweight Zoom only covers Super35 sensors. The optical design consists of 20 elements in 16 groups, and the lens has 9 aperture blades, so in theory, it should produce nice bokeh. The minimum focus distance of the lens is 60cm (23.6″). No, the OOOM written on the lens barrel isn’t a typo, it stands for “Out Of Our Minds”

Unlike some cine lens in the market which are re-engineered from a photo zoom lens, the Laowa Cine lens is a brand new purpose built cinema lens. Laowa claims that it is truly parfocal, meaning the focus will never shift when you zoom in or zoom back out. It is designed to have nearly zero focus breathing throughout the whole zoom range.

The 25-100mm zoom range is impressive for a T2.9 lens. Depending on the price (and I don’t expect it to be that expensive), it looks like it could be a direct competitor to Fujinon’s MK zoom series, and a lot cheaper than other offerings from Zeiss, Canon, and Fujinon.  I would expect it to be significantly cheaper than the Zeiss LWZ.3 21-100mm T2.9-3.9.  There is currently no indication of pricing, but Laowa expects it to be available sometime in the middle of 2019. It would not surprise me to see other zoom lengths appear in the future. 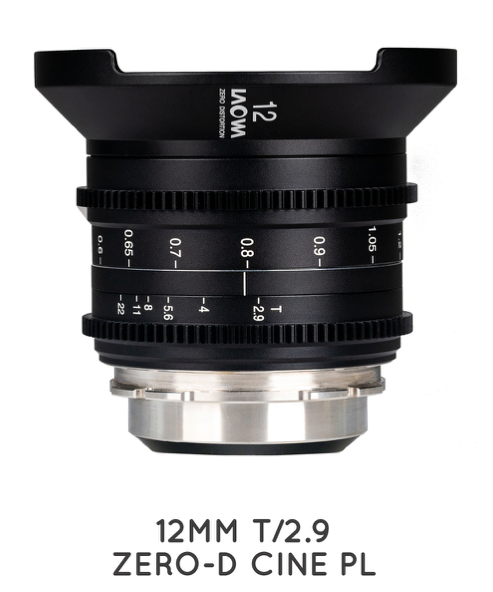 Laowa has also introduced a 12mm t/2.9 PL prime lens. Amazingly this lens covers full frame and VistaVision sensors, and with a 12mm focal length, it will provide a very ultra-wide field of view. Unlike the 25-100mm T2.9 zoom, this lens is not a new purpose-built cinema lens, it is based on Laowa’s 12mm f/2.8 Zero-D that is already available in Canon / Nikon / Sony A / Pentax K / Sony E mounts.

The lens has the widest angle of view (122°) ever built with a T/2.9 lens. At just 650g (1.43lb), the lens is also the lightest and the most compact in its class. Laowa claims that it features a close-to-zero optical distortion, allowing shooters to take landscape/architecture shots with straight lines retained. A water and dust repelling ‘Frog Eye Coating’ is added at the front element of the lens. The 12mm t/2.9 has a 270° focus rotation.

This looks to be a great wide angle lens for digital cinema cameras. With a 122° field of view, it will certainly allow for some interesting shot. Again, just like the 25-100mm t/2.9 Cine Lightweight Zoom, there is no indication of pricing or availability. Given the 12mm f/2.8 Zero-D stills version of this lens retails for $949 USD, I would expect the PL Cine version to cost under $2000 USD.

UPDATE: According to Laowa, the lens will also be available in Canon EF mount.

If you missed it, Laowa also announced ten new lenses.