Yes, it’s finally here, the Canon EOS R mirrorless full frame camera. The Canon EOS R is somewhat late to the game with Sony, Panasonic & Fujifilm all making mirrorless models. Canon does have the EOS M line of cameras but they have never appealed to many in the same way as those offered from the other brands.

In the case of Sony, they are now onto their third generation of a series. Sony is the most aggressive in the mirrorless full frame space. The Sony a7 & a7R were released on the 16th October 2013, that’s almost 5 years ago! Since then Sony has released 9 full frame mirrorless cameras over the last 5 years a7, a7 II, a7 III, a7R, a7R II, a7R III, a7S, a7S II, and the a9. Wow did I miss any?  Until the Nikon Z6 and Z7 were announced, the competition released a grand total of Zero, Zipo, Nada!

Now with Nikon and Canon releasing models what does that mean for companies such as Panasonic, Olympus, and Fujifilm? The pressure is now on them to release a full frame mirrorless. A new rumor is Panasonic is developing a full frame mirrorless camera as well. Is there still a place for APS-C and M4/3 sensors? Or are we seeing a shift in the industry where full frame will eventually become the standard? My crystal ball is in the shop right now so I don’t know for certain but I do feel it’s a natural progression however with full frame comes larger and heavier lenses so I think the strengths of APS-C and MFT systems still have a place in image capture. 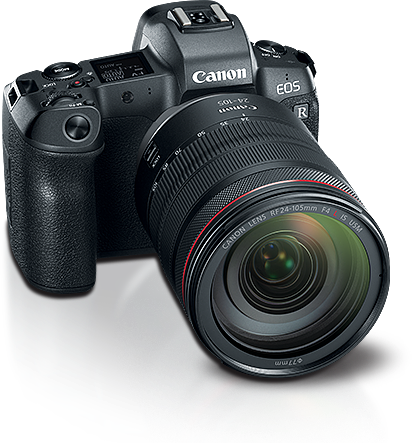 The key feature of the EOS R is the inclusion of ALL-I recording at 480 Mbps. Canon has been stingy with codecs in the past but it looks like they are loosening up a little but don’t expect too much. A new HDR Movie option is available but no IBIS (in body image stabilization). Oh and not to worry, yes the EOS R has a 3.5mm diameter stereo mini jack. 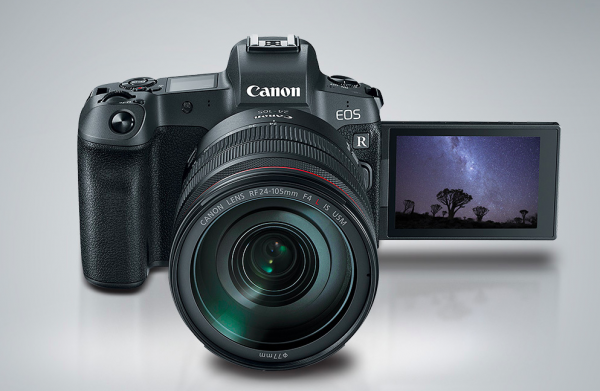 Since Newsshooter is primarily a video-centric site I’m going to focus on the video features of the new Canon EOS R. 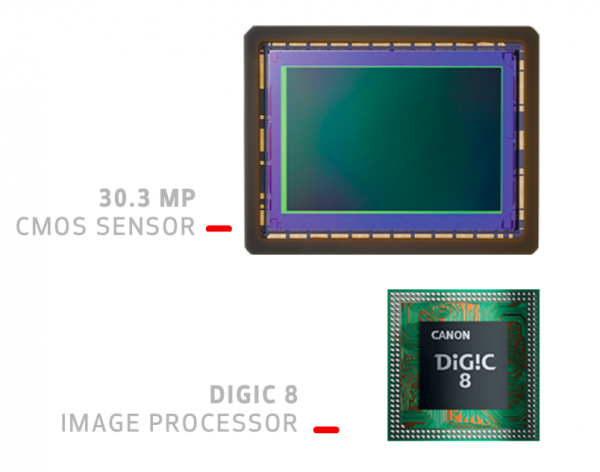 Is this the same sensor as the 5D MARK IV? It sure shares a lot of the specifications. The EOS R has an EF-S crop-mode which is 1.6x crop, close to Super 35mm for use with Canon EF-S lenses.

Canon claims that the EOS R AF can operate in light as dim as a light rating of EV -6^. 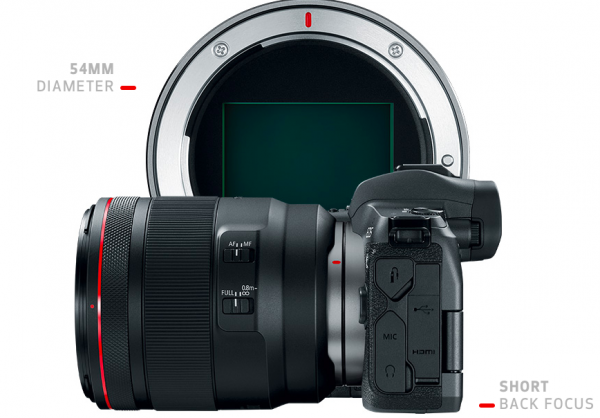 Canon has designed an all new EOS RF mount for their first mirrorless camera. This mount is designed to work with adapters so you can use the vast collection of EF lenses. The large diameter and decreased distance between the rear lens element and sensor enable a compelling combination of image quality, performance and compact lens design. 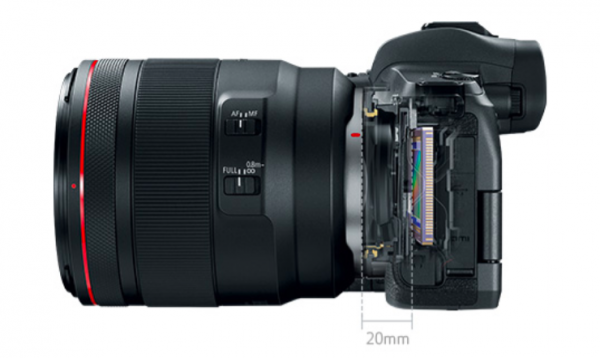 The new RF mount retains the same, large 54mm diameter as the current Canon EF mount, but thanks to the EOS R camera’s mirrorless structure, the rear lens element can be much closer to the image plane. This combination opens up a number of possibilities. The rear element of RF lenses can be larger in diameter, which Canon claims increases image quality at the corners and outer edges of the frame. Larger rear elements mean front elements can be smaller, meaning less strong refracting and bending of light rays within the lens. Most importantly, the EOS R system opens the door to the future. It unlocks more freedom and flexibility in lens designs, allowing faster lenses with increased optical performance in a more compact form.

It’s great to see a higher quality option with the EOS R. The addition of ALL-I H.264 compression at a bitrate of 480Mbps in 4K UHD is a long time coming for a Canon camera. Maybe the C200 will get a bump. If smaller files fit you better you can shoot in 120Mbps in IPB mode. No DCI option. 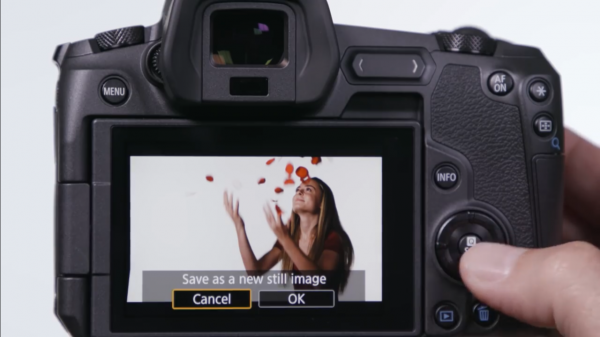 Other new video features include the ability to pull UHD Jpeg stills from video files as well a built-in interval capture mode for creating HD or UHD movies. Canon have also made distortion correction and Digital IS with 5-axis image stabilisation available while recording video.

Like most hybrid cameras the Canon EOS R has a continuous recording limit of 29min 59sec. Once you hit the limit the recording will stop. It is interesting that that video can be recorded during still photo shooting by simply pressing the Movie Shooting button. 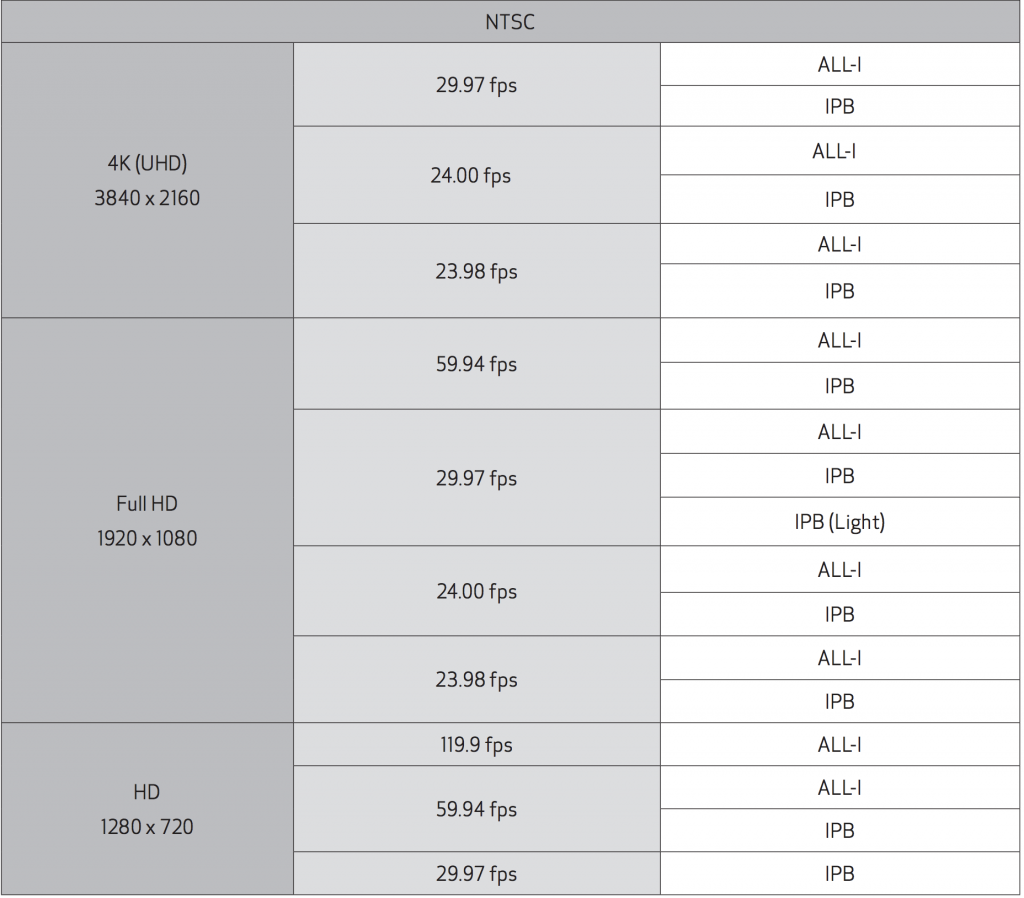 Full HD 59.94 fps not available during EF-S cropped shooting.As you can see in the specifications for frame rates, the Canon EOS R has limited resolution options for higher frame rates. In 4k UHD the max is 29.97 fps. to get 59.94 you have to bump down to full HD and to get 119.9 fps you drop to 720p. The good news is the ALL-I option is available for all frame rates. 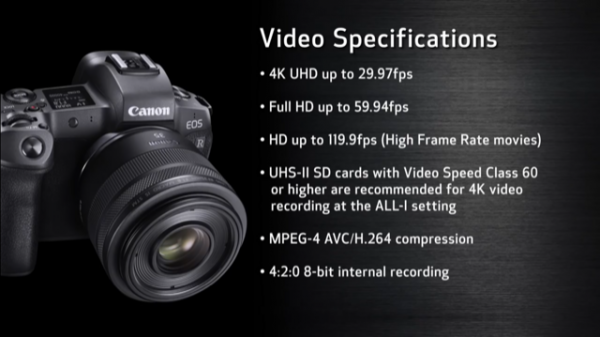 Worth mentioning is the ability to see the image on the LCD screen as well as through the HDMI output at the same time during recording. No LCD blackout is very nice. 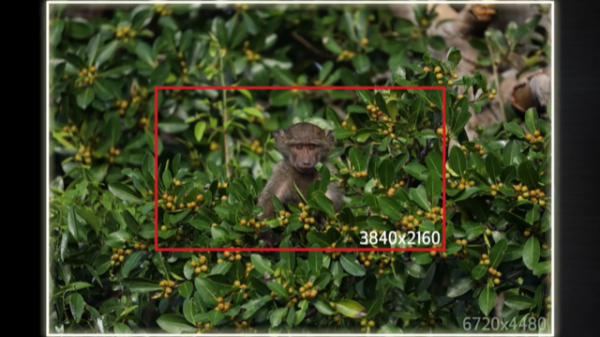 Just like the 5D Mark IV, when recording in 4K, the sensor is cropped. When the EOS R is recording UHD (3840 x 2160) it is doing so by taking that area from within the 6720 x4480 size of the sensor. This massive crop when shooting in UHD is in some ways a deal breaker for many shooters. It sort of defeats the purpose of buying a full frame camera in the first place. 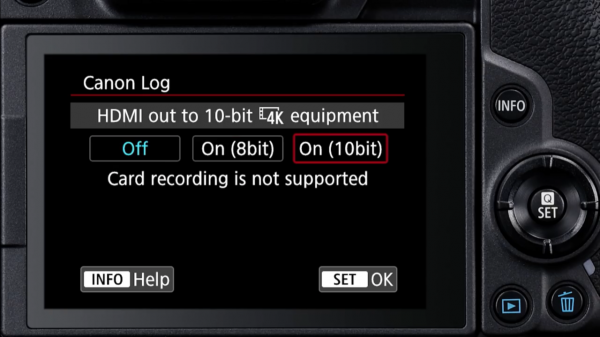 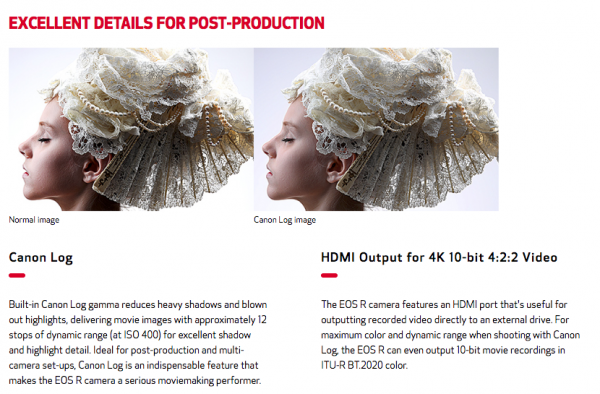 Canon claims the EOS R has approximately 12 stops of dynamic range when using Canon Log and shooting at ISO 400.

The EOS R also features Touch and Drag AF makes which is an easy way to select a focus point without taking your eye away from the viewfinder. Using the Touchscreen LCD, it’s as simple as pointing to the desired area of focus. The chosen AF point is then displayed in the camera’s EVF for quick confirmation.

To help with manual focus operation, the camera has focus peaking and dual pixel focus guides. 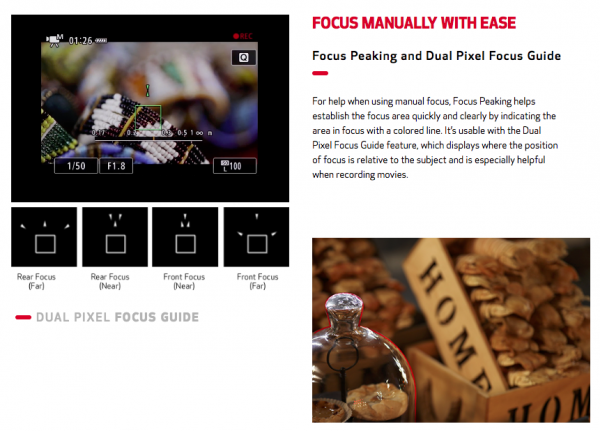 It also has a 3.5mm mic jack and headphone output for monitoring audio. 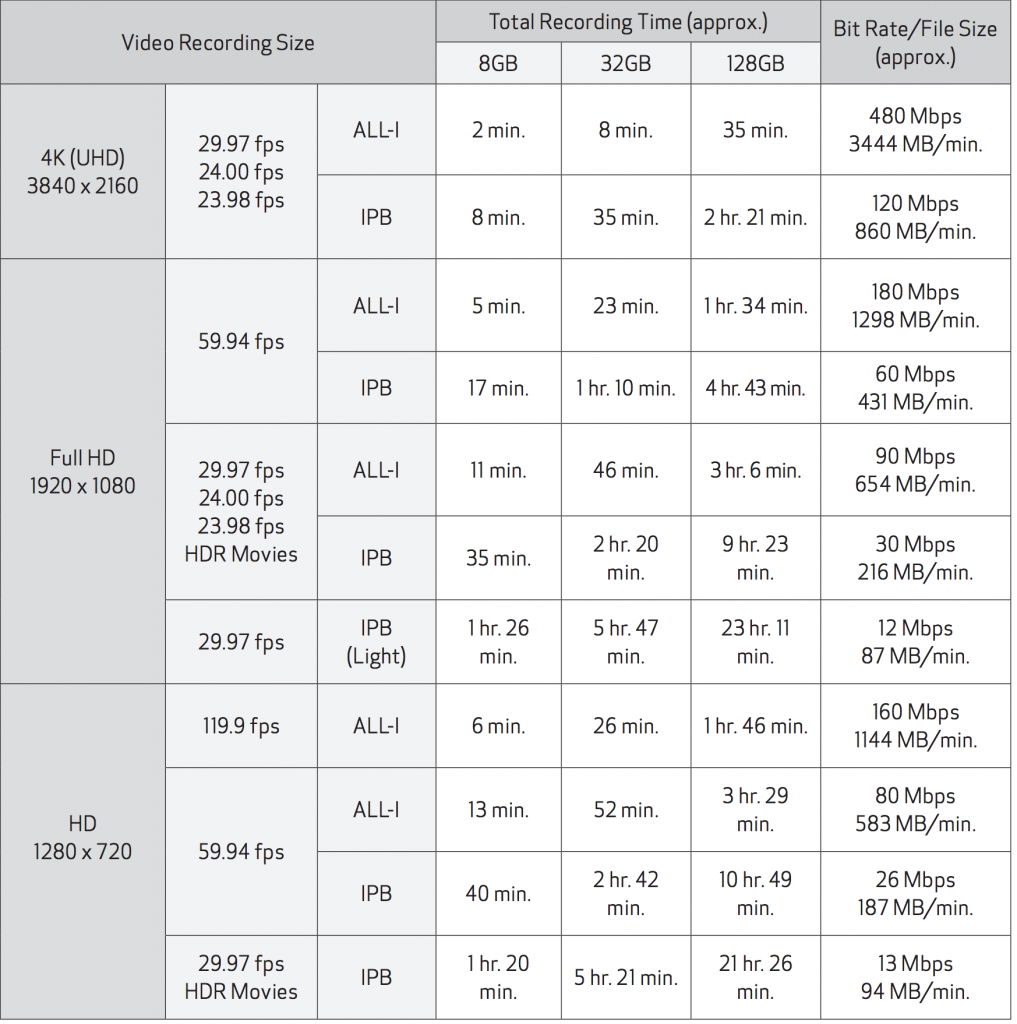 The Canon EOS R uses SD Card media and has only one slot. This will make professionals cringe as not having a backup option with dual card slots makes the camera a little scary for paying gigs.

A solid EVF or viewfinder is essential with a mirrorless camera and it has been a sore spot for some of the early models. The Canon EOS R has an OLED color electronic viewfinder with 100% coverage. Magnification is approximately 0.71x/33.3° (Approx. 0.76 (with 50mm lens at infinity, -1 m-1)

The Canon EOS R has a new feature not seen on any camera before the M-Fn Bar. The feature has four action types (left, right, slide, press completely) It is designed to get quick access to certain settings like IS and white balance plus a customizable option as well in shooting mode. For playback, the M-Fn Bar can be programmed for a function shortcut and jump display. This new feature is one you have to try to see if it adds a better user experience to the camera or just gets in the way.

As a bit of background, Canon developed and produced the Canon R lens mount for film SLR cameras in 1959. The FL lens mount replaced R-mounts in 1964. Probably a total coincidence but Canon have another R mount 59 years after they first introduced their first R mount in 1959.

The Canonflex was introduced in May 1959. It was Canon’s first 35 mm single-lens reflex camera. Its standard lens is the Super-Canomatic R 50mm f/1.8, using the first version of Canon’s breech-lock manual-focus lens mount, the R lens mount, which would evolve into the Canon FL and Canon FD lens mounts over the next three decades. The Super-Canomatic lens features fully automatic aperture operation, using two internal connections. Canomatic and R-series lenses use semi-automatic or manual diaphragms. Though the breech-lock mount itself remained unchanged until the introduction of the EF lenses for EOS autofocus cameras in the late 1980s, the actuating levers of the Canomatic or R-series lenses operate differently from their FL and FD descendants. 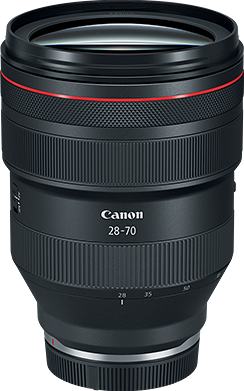 This new R mount is yet another big leap for Canon, perhaps that is also why they chose this name for their new full frame mirrorless. 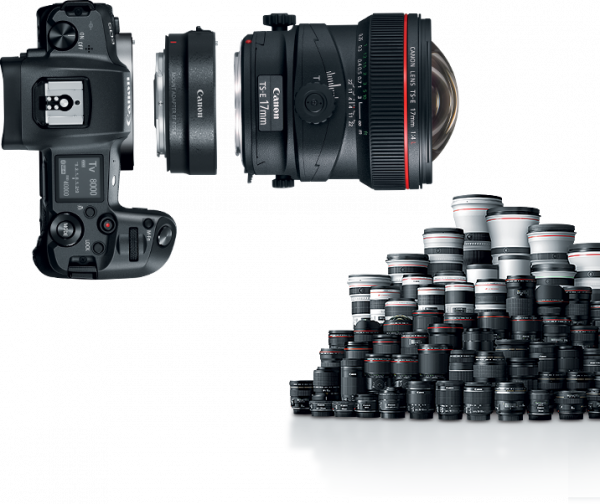 With the announcement of the EOS R, Canon also introduced three lens adaptors.

The Control Ring Mount Adapter EF-EOS Radds a control ring like those found on RF lenses, providing the same level of control to your EF and EF-S lenses and supporting the same setting configuration regardless of lens.

The Drop-in Filter Mount Adapter EF-EOS R enables compatibility with EF and EF-S lenses and includes drop-in filter capability for use with circular polarizing filters or variable ND filters. This enhancement enables compatibility with numerous lenses regardless of their front diameter, and makes filter use possible with lenses like the ultra wide EF 11–24mm f/4L USM lens or the tilt-shift TS-E 17mm f/4L lens which cannot accept a filter on the front. It also retains full autofocus and image stabilization capabilities and contains no optical components, thereby maintaining the original optical quality of the mounted lens.

On paper the EOS R is a bit underwhelming when it comes to video specifications. The massive crop when shooting in UHD and the lack of any frame rates that are higher than 60p in HD will be deal breakers for a lot of shooters. The proof is in the pudding as they say, and we will have to wait until we see more footage and try the camera out before passing further judgment. Specifications only tell you part of the story. For now the EOS R looks to still be playing catch up to Sony and unfortunately it’s more of an evolution rather than the revolution that Canon users were hoping for.

What one you think about the Canon EOS R? Let us know in the comments section below.