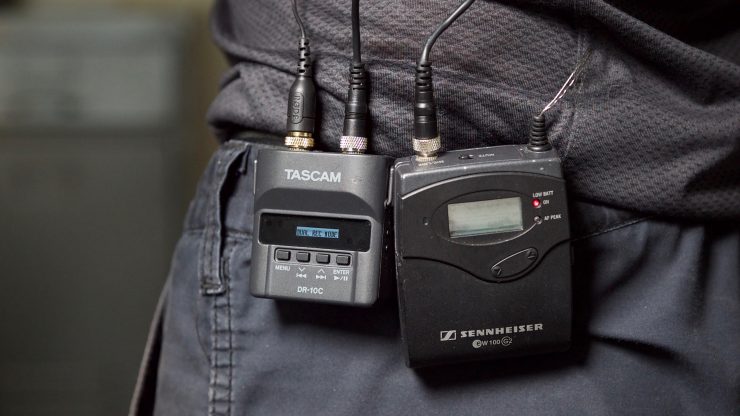 TASCAM’s DR-10C-series recorders allow you to connect your lavalier microphone to create a wearable linear PCM recorder that can also be paired with a wireless beltpack system for backup recording.  There are two versions available in the DR-10C series –  the DR-10CS which works with Sennheiser mics and DR-10CH which is for Shure microphones. Additionally, option kits are available for Sony/RAMSA (AK-DR10CR.) and Shure (AK-DR10CH). 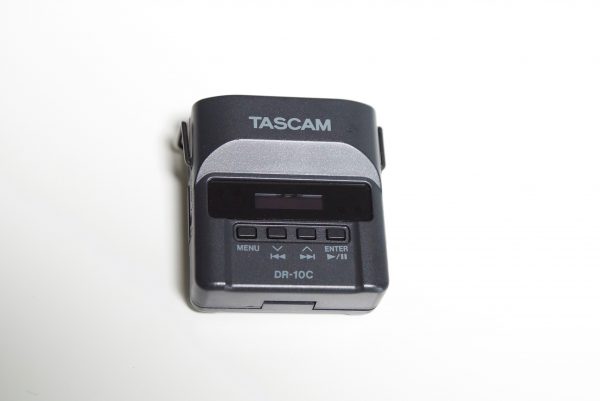 The TASCAM’s DR-10C-series of recorders are very handy products if you are working with wireless radio mics over long distances where you may experience a break in the connection. Having the ability to record a backup is crucial if you are in situations where this may occur. There is nothing worse (well ok, there probably is) than having to redo takes because the radio mic was breaking up or had interference. 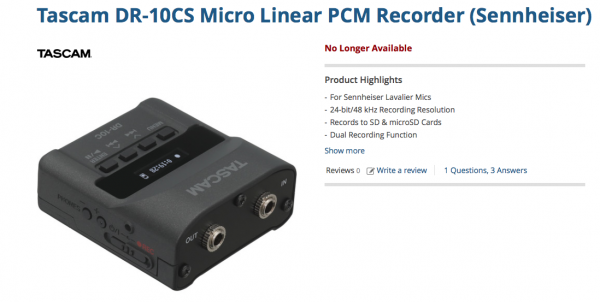 Now just to be perfectly clear these recorders are not available in the U.S because Zaxcom has a patent (U.S Patent No. 7,929,902, 8,385,814 & 9,336,307)  on“Virtual Wireless Multitrack Recording Systems.” They successfully sued Tascam when they launched the DR-10C series and Tascam was forced to withdraw the models from sale in North America. Zaxcom is also suing Lectrosonics over the PDR unit claiming infringement of that patent.

The good news is, if you live outside of the U.S, you can purchase the DR-10C series (sorry America). If you do happen to live in the US, then you can get the DR-10L, but that model does not integrate with a wireless transmitter it’s a stand alone compact audio recorder.

What does the DR-10CS work with?

The DR-10Cs works with the following products from Sennheiser:

The Ins and Outs 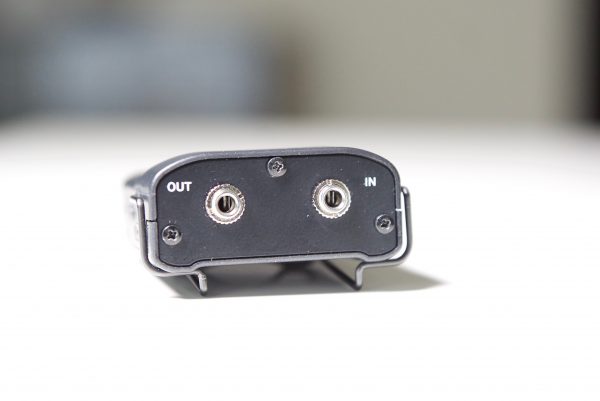 The nice thing about the DR-10CS is that it has both inputs and outputs, so they can either be used in a stand-alone capacity or with a wireless transmitter as a backup. The DR-10CS has two 3.5mm(1/8″) TRS jacks with screw locks.

When used with a transmitter, the DR-10C acts as a backup to protect against wireless dropouts during recording. This makes it perfect for events like weddings and reality TV production where you can’t do something again if there is an audio breakup.

It comes with a silicone band that can be used to attach it to the transmitter, as well as a belt clip. Despite being so small, you still need to take into account that it is going to take up extra space on your talent. This needs to be factored in, particularly if you are hiding your transmitters and don’t want them to be seen. 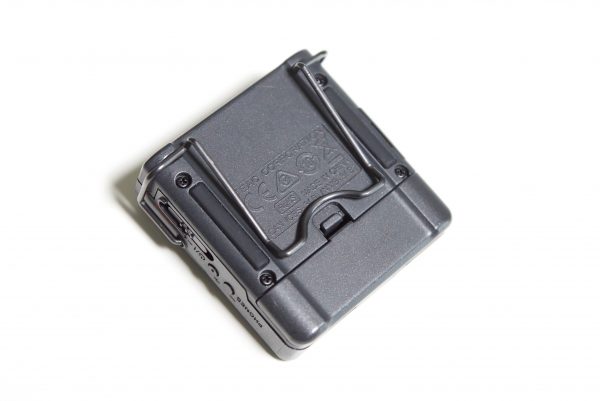 The DR-10CS is made out of a hard plastic and the overall build quality is average. The included belt clip is very stiff and reminds of the same one that comes with the Sennheiser G3 radio mic transmitters. The buttons and switches are ok, but nothing to write home about.

The DR-10CS can run for many hours on a single AAA battery. Here are the exact run times depending on what type of battery you use:

These runtimes are pretty good, but if you are on long shoot days you may end up having to change batteries halfway during the day just to be safe. If you prefer, you can also power the DR-10CS via USB bus power.

If the battery dies and the unit stops, the transmission of the audio signal to the wireless system will not be affected. This is a nice safety mechanism as you never want one device effecting another. 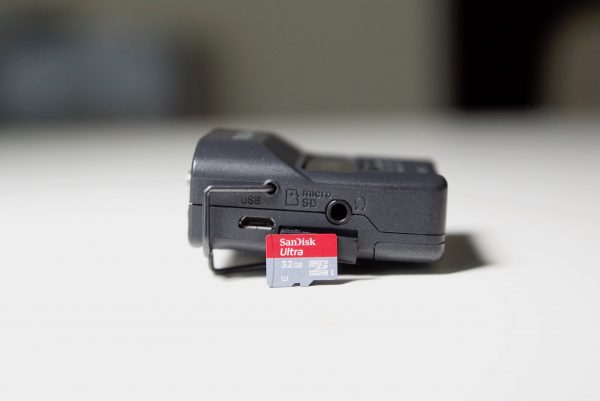 The DR-10CS records to standard microSD cards. The maximum card size recommended by Tascam is 32GB.On their website, they also have a list of recommended and tested cards that will work with the recorder.

Recording features include auto-gain and a low-cut filter. There is also a dual recording feature that as the name suggests, records a safety track of your audio at a lower level, so in case of distortion, you have a non-clipped backup. The Backup track recording can be attenuated by either -6db or -12db, which is handy if suddenly you encounter loud noises. You can’t however, adjust the level manually of the backup track. 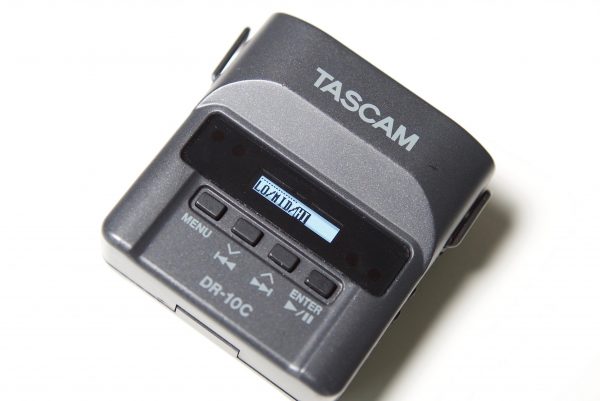 Unfortunately, the audio levels on the device are quite difficult to see and there is no reference as to what the audio level being recorded is. In the supplied manual it does show you where -12db is on the display, but that doesn’t really help you when you are using the device out in the field. There is also no way of choosing your levels manually. You can only choose between Low/Med/High in the Mic Gain settings menu. 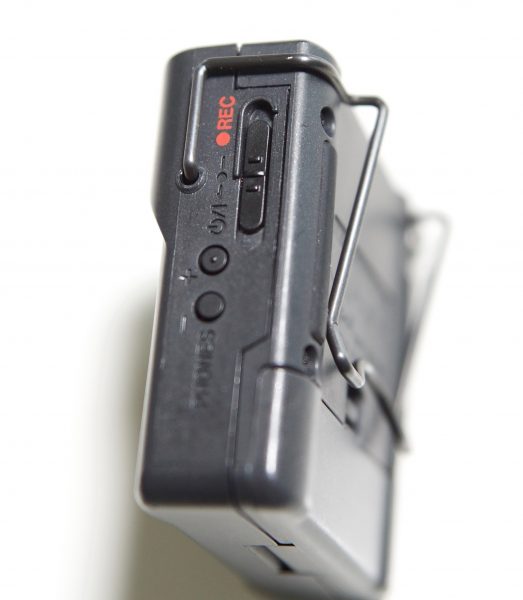 A single recording switch uses a sliding mechanism which has been designed to prevent the unit from accidentally turning off or having the recording stop.  There is also a hold function that prevents recording from being stopped by accidental contact with a button. I do wish that Tascam would have made some sort of smartphone app for making changes, monitoring and controlling the DR-10CS. That way you could check it from time to time to see that everything is working correctly. It would also make it a lot easier to stop/start recordings, as when it’s mounted on a belt the record switch is hard to get to.

If you want to use multiple DR-10CS units, as may be the case when working in reality TV, an infrared signal can synchronize settings between all of the recorders.

For added reliability, the DR-10CS uses a system with independent signal circuitry for recording, and pass-thru from the mic to the transmitter. The signal from the wireless mic is input to the recorder – and separately passed-thru directly to the transmitter. If the battery charge runs out, automatic file closing prevents the loss of already recorded data.

This unit also has a built-in clock and supports BWF audio files that have time information added to them. This feature is helpful for searching and editing recorded audio files 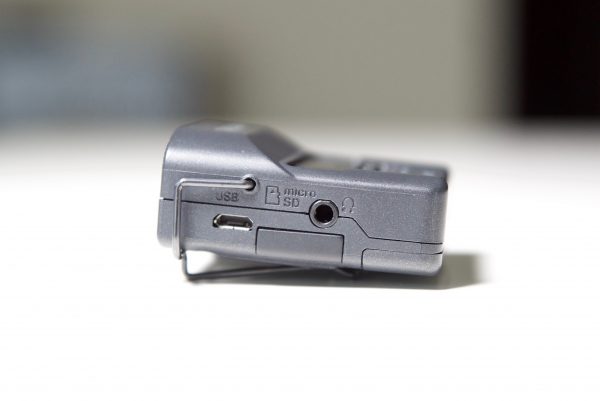 Not only can the DR-10CS record, it can also be used to playback your captured audio files. You can do this through the use of the headphone jack. I like this option because it’s always nice to be able to do a quick check to make sure everything is working correctly before letting it record for hours on end.

The DR-10Cs seems to tick quite a lot of boxes, but how does it actually perform in the field? I found that it worked as advertised and despite the vague audio level display and the inability to manually set the levels, the results I obtained with perfectly acceptable.

Mounting the DR-10Cs is a little bit of a pain because the belt clip is very stiff and it is hard to place on belts that are a bit thicker. If you are using it in combination with a radio mic transmitter the talent does have to wear two devices, and that can be a bit uncomfortable. It also makes it very difficult to hide the two devices. 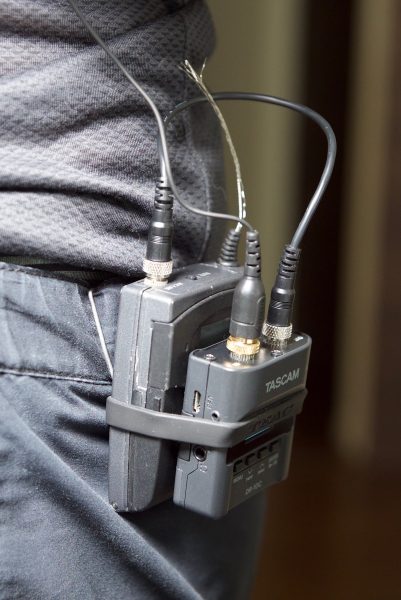 Using the elastic strap to mount the DR-10CS to a radio mic transmitter makes it very bulky and also makes it impossible to hide under clothing. With the included 3.5mm cable only being quite short, there is no way of placing the two devices on either side of your talent, they have to be reasonably close together. 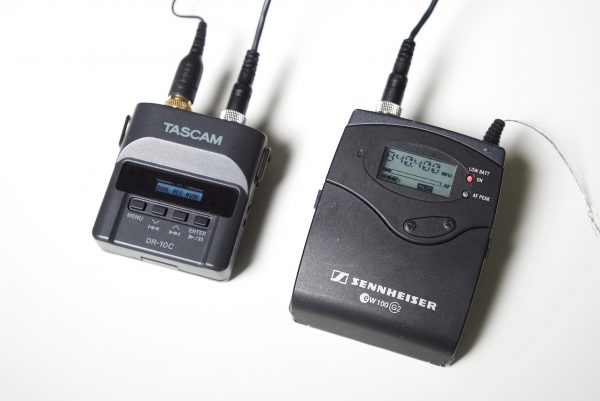 The Tascam DR-10CS is far from perfect and it certainly does have its limitations. However, in saying that, it does do its intended job with little fuss and provides you with a nice safety net when using radio mics. It’s also right at home being used as a separate discreet recorder when you can’t use or don’t have a radio mic.

I do wish Tascam made an app for use with the DR-10CS as it would make it a lot easier to control, monitor and operate. It would have also been nice to see a single model that could be configured to be used with a much wider variety of radio mics and lavaliers.

Despite these small complaints I still found the DR-10CS to be a very capable device and one that can save you a lot of headaches if you are working with radio mics over large distances or areas where they might break up.