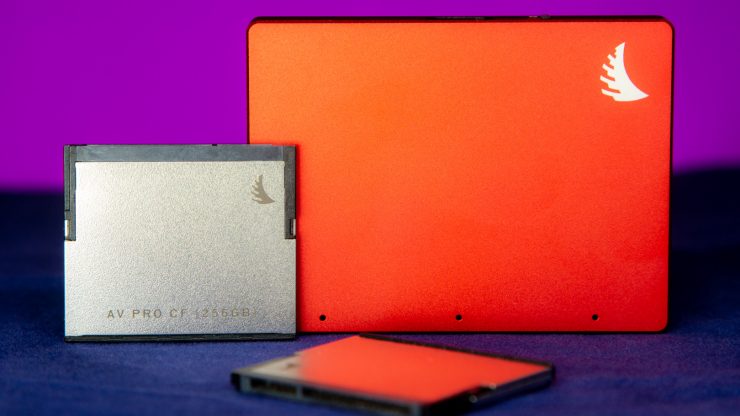 The number of cameras that use CFast media is growing rapidly and the prices are coming down. In early 2015 a typical 60GB CFast card sold for about $400. Nowadays you can get a 256GB card for about the same price as a 64GB three years ago. While compared to SD cards it may seem expensive, SD cards can’t achieve the speed of a CFast card that is approximately four times faster.

The Angelbird AV PRO CF CFast cards cost approximately $400 USD each for the 256GB model. Angelbird sells CFast cards in bundles as well. Retail pricing for the 2-CFast card kits is $780 USD and 4-CFast card packs are $1,499 USD. If you are in need of both CFast and SD cards bundles are available.

I’ve been using a pair of Angelbird AV PRO CF CFast 2.0 cards for several months now with two cameras. The Canon C300 MKII and Blackmagic Design URSA Mini Pro. They have performed very well and not given me any issues. 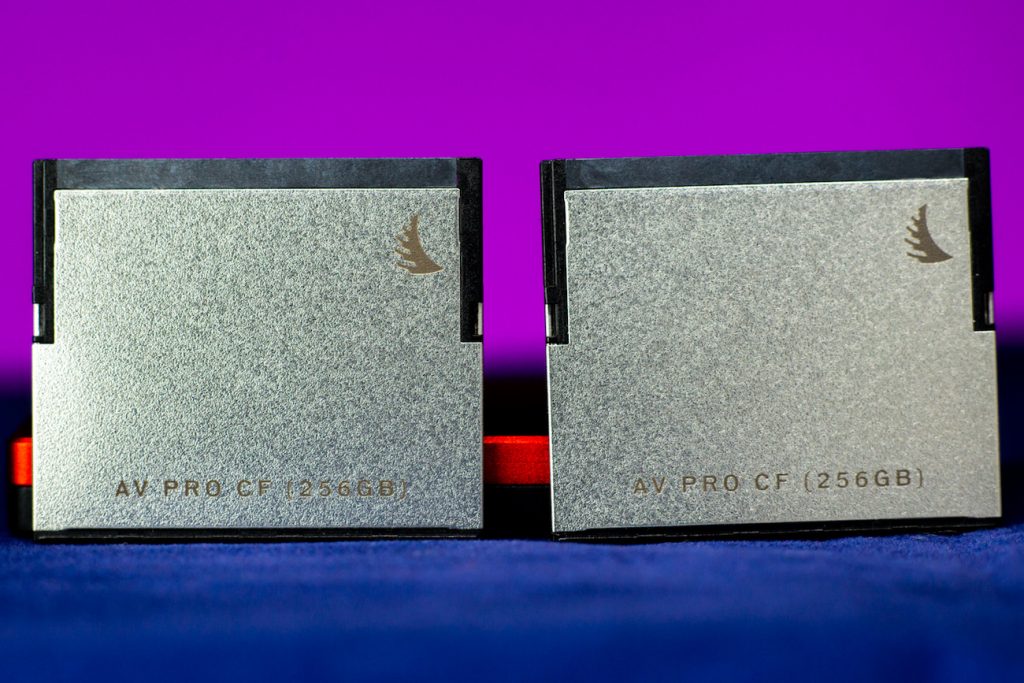 The Angelbird AV PRO CF CFast 2.0 cards I’ve been testing are the 256GB model. This is a nice capacity for UHD acquisition. Larger 512GB are starting to come out and are also more expensive per gigabyte at this time. An Angelbird 512GB CFast card cost $1,099.90 USD. Some cameras have issues with the larger sizes but I’m sure firmware updates will fix this.

I like to spread the media out onto several cards as opposed to one big card just in case something goes wrong like a card gets damaged or lost. That thought puts shivers down my spine. The 128GB is great for HD but in UHD they only hold around 30 to 40 minutes. With a larger 256GB card, I can get approximately 80 minutes of UHD 10-bit MXF files from the C300 MKII and 71 minutes of UHD ProRes 422. I feel comfortable with these record times. Two CFast cards are plenty for me but four would be even better 😀 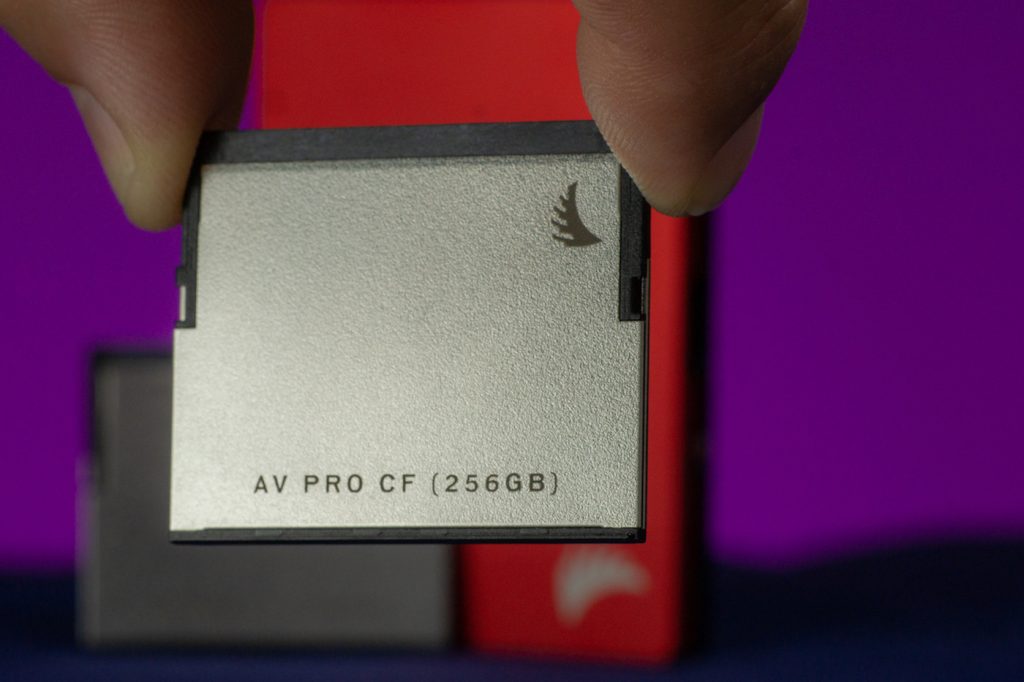 The CFast cards build are made of metal with plastic outer parts that the contacts are housed in. Inserting the CFast cards into cameras is smooth as would be expected. The front of the cards is very clean with minimal branding and logos. This is good if you want to add your own text like card numbers or other identifying markings without covering up the card’s capacity.

A new performance standard has emerged from SanDisk called “Performance Guarantee 130 standard” or VPG-130. This means that the minimum write speed will never drop below 130 MB/s. This is very important for error-free uninterrupted capture only SanDisk CFast cards have this right designation. I asked Angelbird about their CFast cards and if they are VPG-130 compliant and was told they are.

Included in the retail packaging is a foam case that doubles as a storage case that holds up to four CFast cards and six SD cards. Included is a basICColor Mini Target for creating camera profiles. The basICColor inputRAW software is a 14-day trial and retails for € 150,00.

The Canon C200 uses CFast 2.0 for Canon RAW Light. Personally, I haven’t tested these Angelbird cards with the C200. I did ask several owners if they have tested these and I got some mixed reviews. For the most part, the 256 GB cards are working, however, larger 512 GB models seem to have issues. This isn’t an Angelbird only issue as other brands seem to have troubles as well. As I mentioned earlier firmware updates will most likely fix these issues. 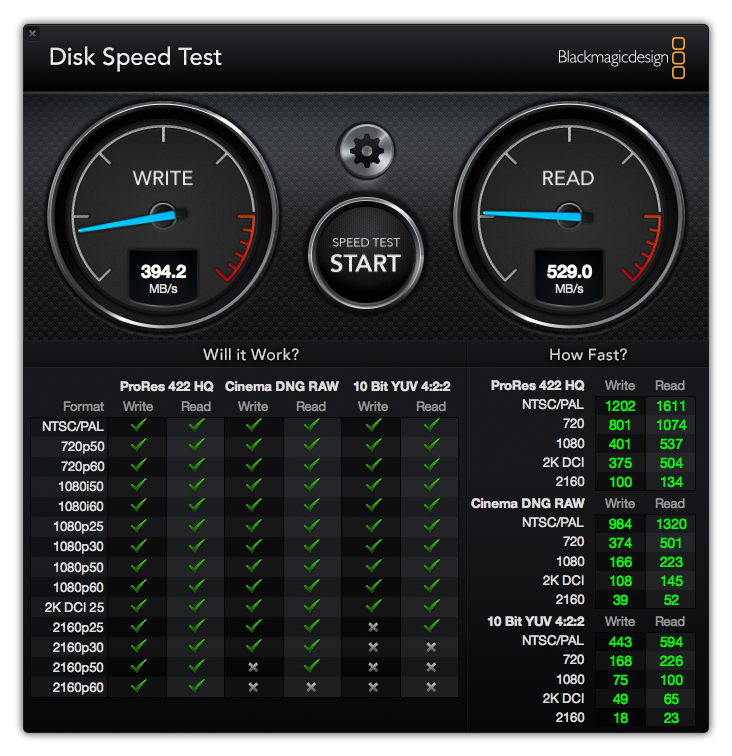 Using the Angelbird Dual Card reader with Thunderbolt 3 on my iMac and the Blackmagic Design Disk Speed Test software, the Angelbird CFast media is pretty fast with a WRITE speed of 394.2 MB/s and READ at 529 MB/s.

Below are a couple comparisons to other brand CFast cards. 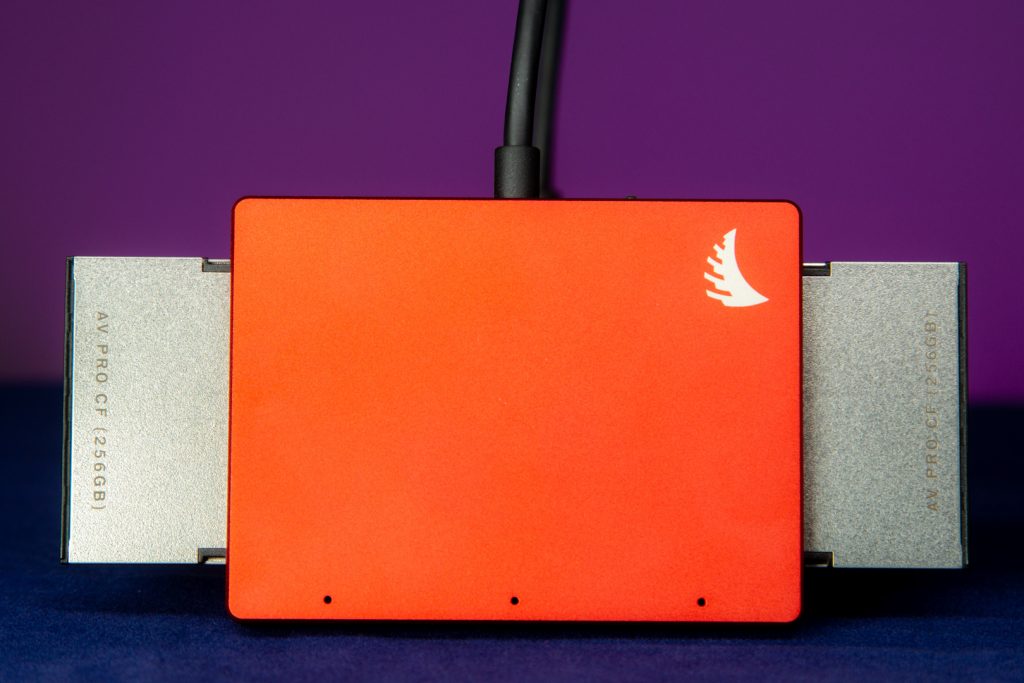 The Angelbird Dual CFast Card Reader has a build quality of an external hard drive. The body is housed in a precision CNC-worked aluminium case with a footprint the size of a credit card. Angelbird says it can withstand 2 tons of weight. The all-metal construction feels really nice in the hand. If you’re like me and love a well-machined metal piece of kit you will really like the dual card reader. It feels like it will outlast any card reader I’ve ever owned. No plastic here. 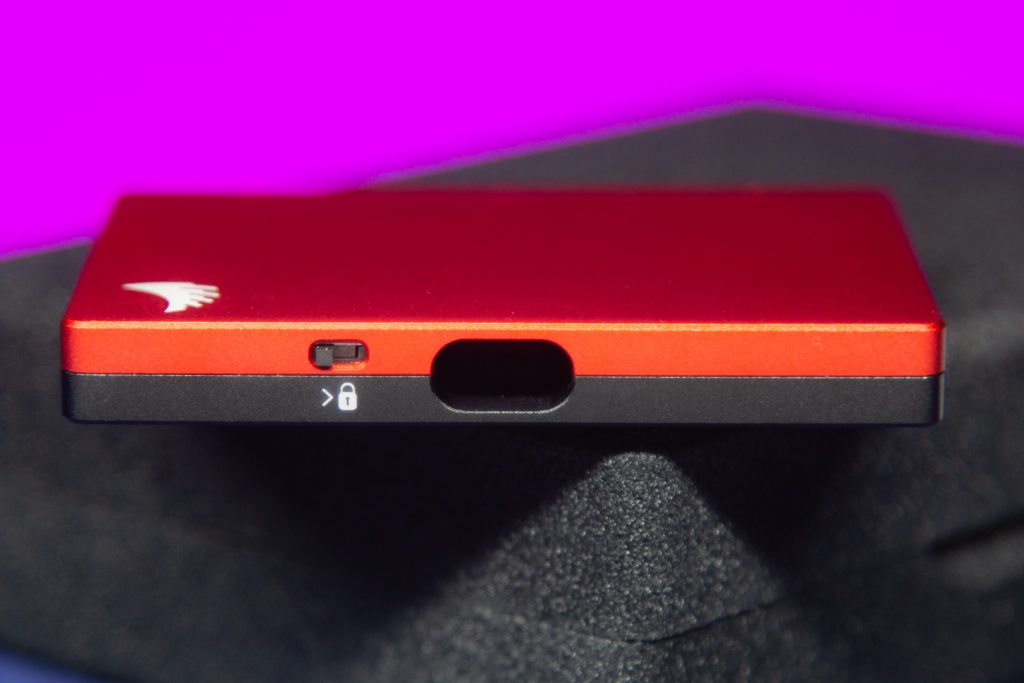 A nice touch is the CFast card readers locking feature. With the switch engaged, the reader is locked and will only allow copying media. No accidental deleting of your precious media. To activate or deactivate the write protection function the card reader needs to be disconnected from the host system first, then activate/disable the write protection switch then reconnect. Switching while operating is not supported. 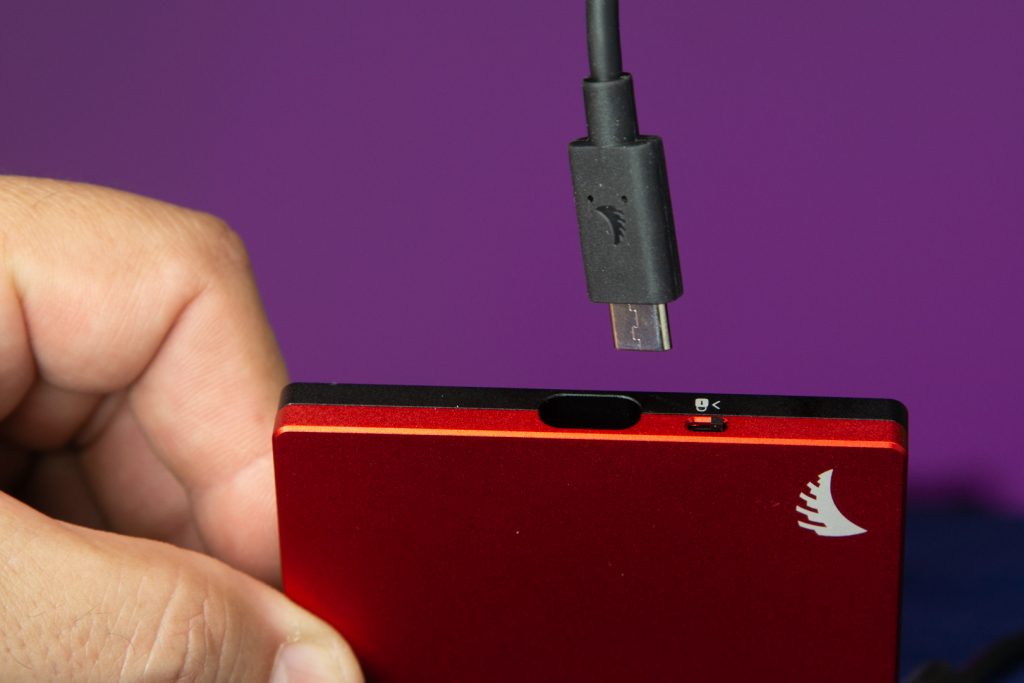 Angelbird has a very nice feature that they implemented on their line of SSD Drives. The cable connector inserts into the body of the CFast reader. This does two things. 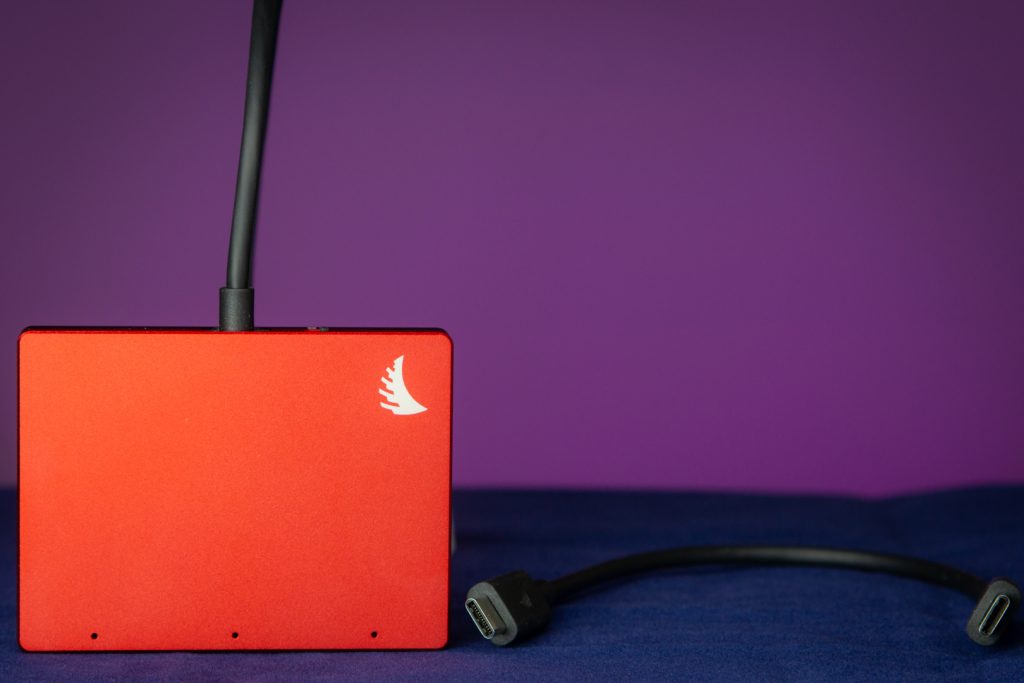 It protects the connector as it’s inside the reader. This makes it a very secure tight fit to prevent accidentally disconnecting the reader if bumped. The CFast reader comes with two cables. A USB C to USB C and a USB C to USB A. The cables are little short at only 23 cm or 9.1 inches. This isn’t uncommon these days.

With my 2017 iMac’s Thunderbolt 3 port the Dual Card Reader doesn’t sit flat on my desk. One or two inches longer would be better. I like how the cable inserts into the reader.

One downside. If the cable gets lost you are out of luck and will need to order another from Angelbird or find one that fits the same profile. I have a couple USB type C cables and none of them fit inside the Card Reader. Best to leave the cable attached for safe keeping.