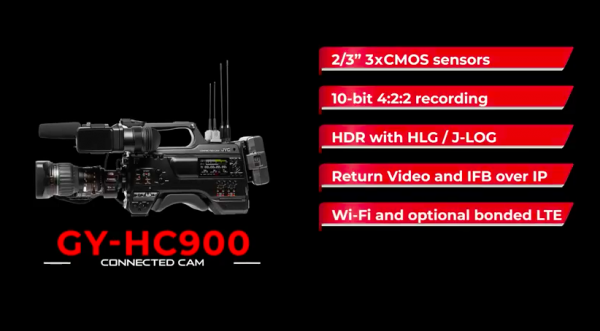 When paired directly with the optional ProHD Dockable Bridge or via Wi-Fi with any ProHD Bridge unit, the GY-HC900 allows on-air talent to conduct a two-way interview with return video while streaming live to air without any external boxes or backpacks. This is JVC’s first camera that features a new communications engine that optimizes both image processing and IP performance. According to JVC, this engine enables simultaneous recording, low latency streaming, and simultaneous decoding for return video and IFB. Latency can be as low as 500ms for both outgoing and incoming video.

Having built-in live streaming technology and return audio is certainly a very useful feature for news organizations. Going live as quickly as possible is paramount in today’s news environments, and being able to do it without the need for an external LiveU or Dejero system saves a cameraman from having to carry around extra equipment.

Looking beyond ENG, the GY-HC900 also looks to be a good choice for high-end EFP and studio fiber applications. It works with the FS-900 camera module, which attaches to the camera via a 68-pin interface, and feeds 3G-SDI signals, control, audio, sync, and intercom to a base station via fiber. 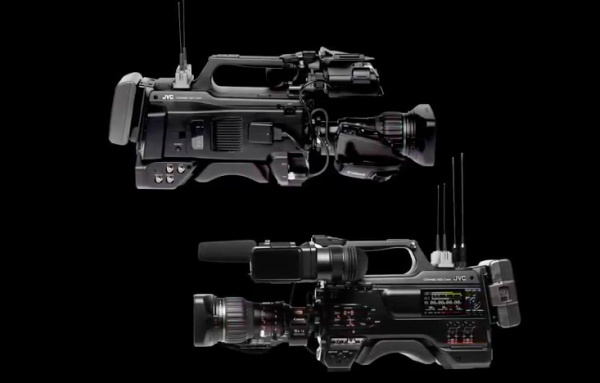 The camera is equipped with an industry standard B4 lens mount and four-position optical filter. The GY-HC900 delivers a sensitivity of F12 at 60Hz, F13 at 50Hz in extended mode and high 62dB signal-to-noise ratio (in standard mode). The 2/3-inch CMOS sensors, each with 1920×1080 pixels, combine with an F1.4 prism to produce full HD images. The camera also offers an HDR mode, as well as up to 120fps 1080p slow-motion recording.

The GY-HC900 supports native recording of both MPEG-2 at up to 35 Mbps, which is widely used by broadcasters, and H.264 (.MOV), which provides 10‑bit, 1080/60p 4:2:2 footage. Plus, the camcorder records in Sports Exchange Standard formats, so sports organizations can produce HD video with rich metadata that specifically addresses the workflow needs of sports production and video coaching applications. The camera can also record in J-log. 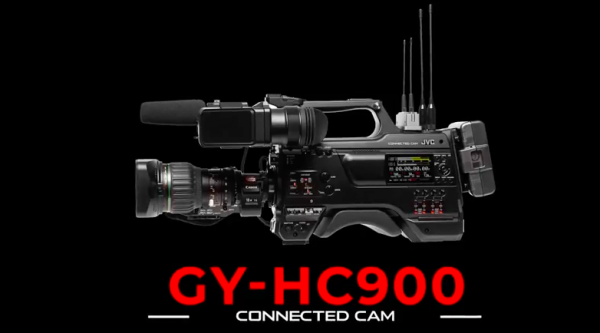 The camera weighs in at 4.7kg (10.36lb) and draws 35W of power. This low power draw means it can be run off standard V-lock or Anton Bauer batteries for long periods of time, even when streaming.