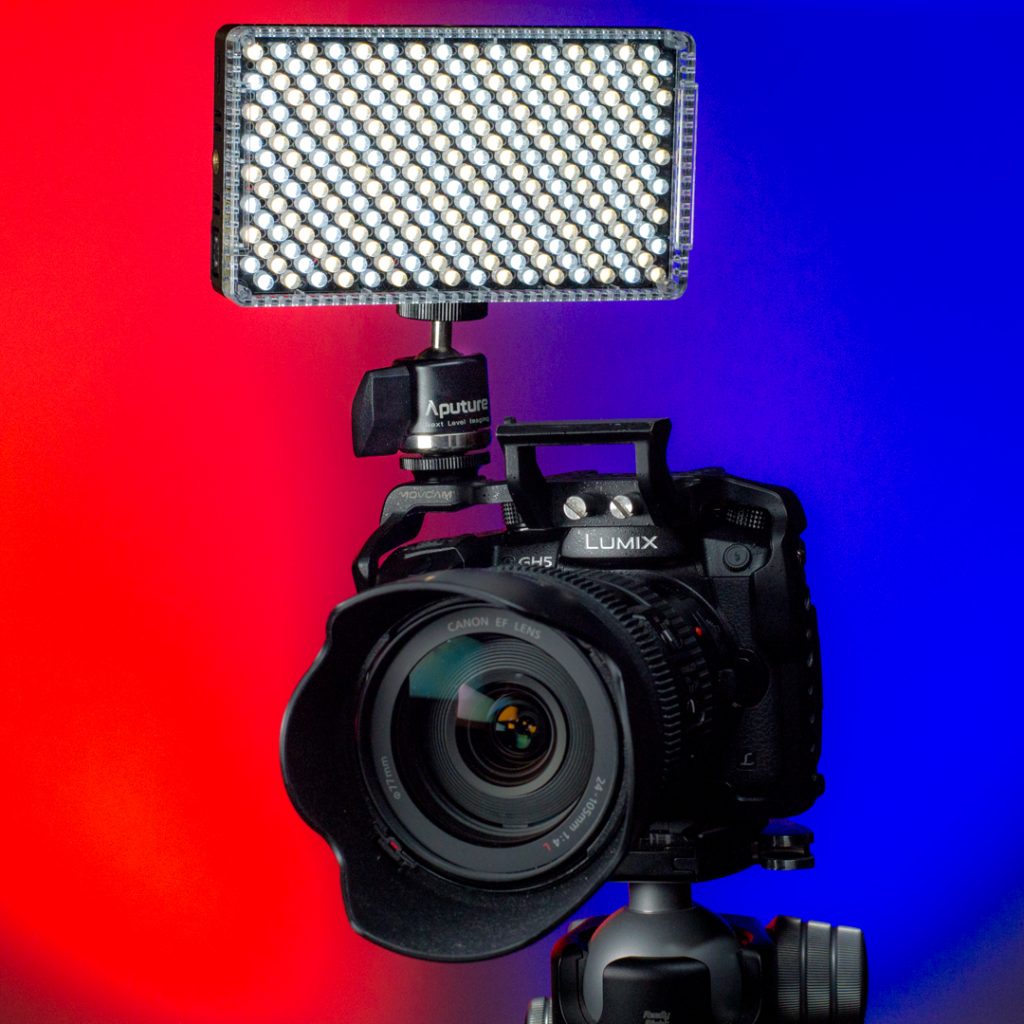 Aputure today introduced two new lights, the Amaran AL-F7 & Amaran AL-MX. Both have a little history behind them which I’ll cover in this article. Let’s start with the new Amaran F7. 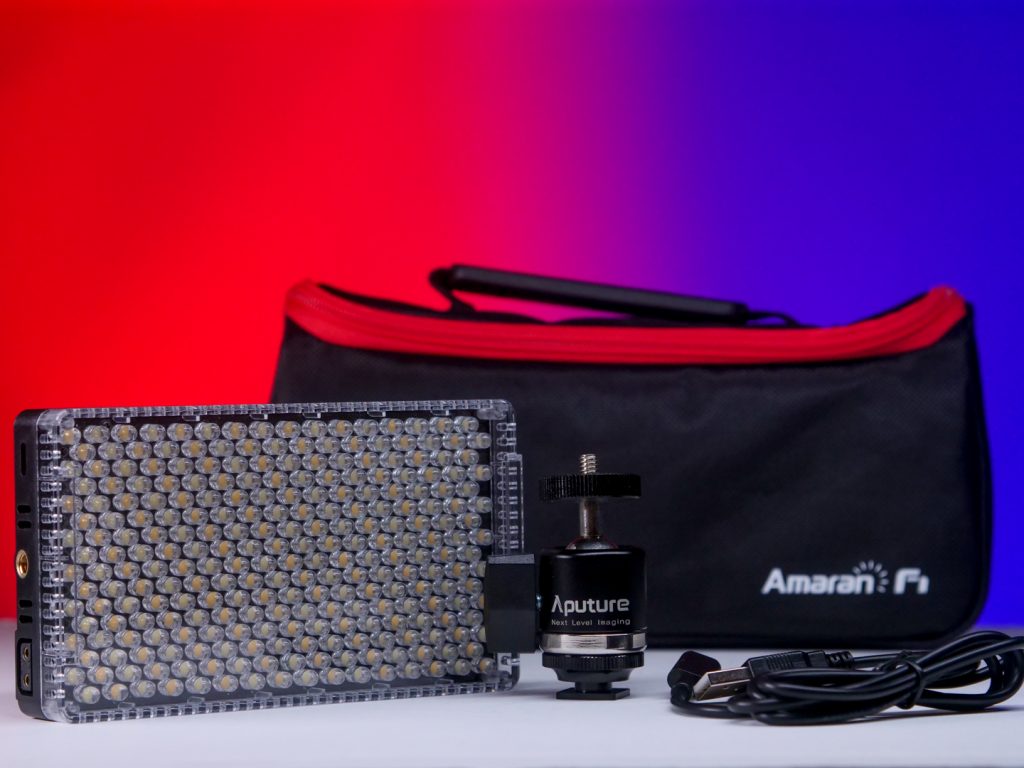 The Aputure Amaran F7 is an updated version of one of Aperture’s first products, the Amaran 198. I actually have two of these lights that I bought years ago and they still work today.

The Amaran F7 does everything that the Amaran 198 does only with improved features. 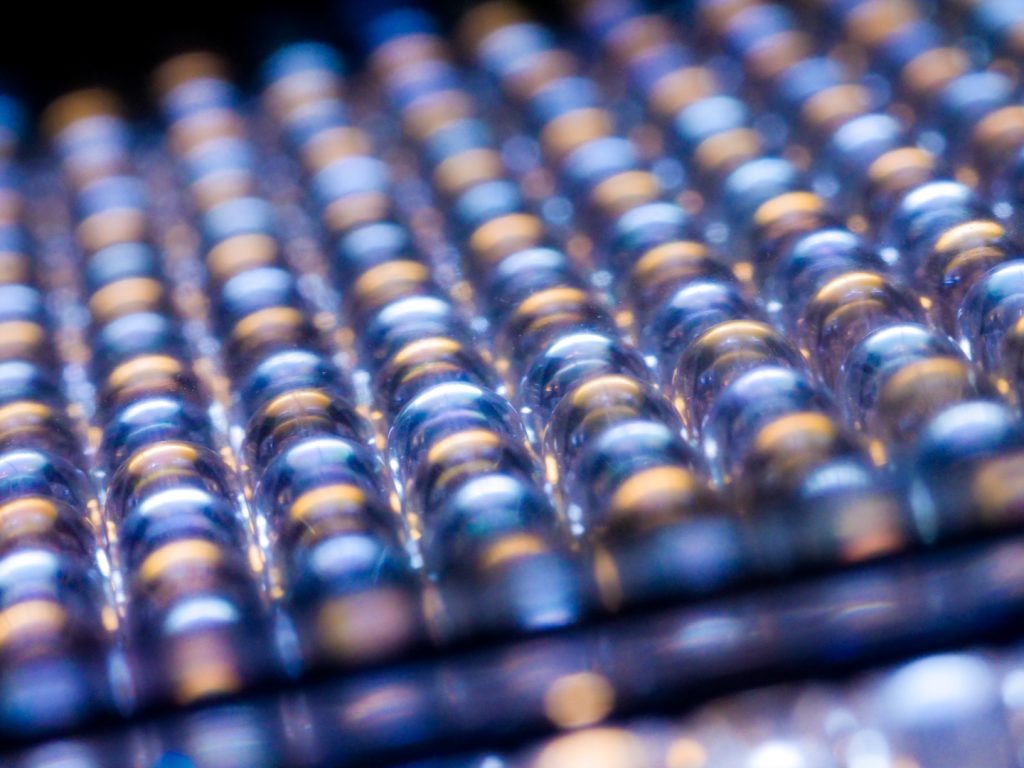 The F7 is packed with 256 LEDs into a slightly longer, but almost identical surface area, however, the F7 is 3x brighter than the Amaran 198c at 5500k. 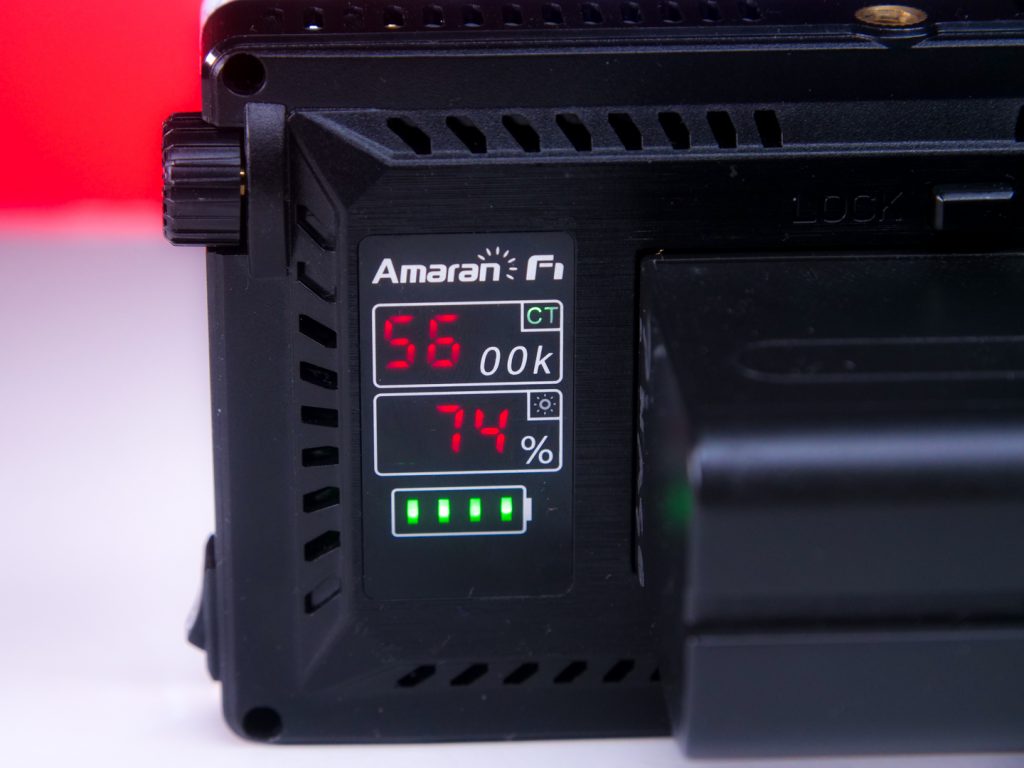 While the F7 is significantly brighter, the build of the F7 is more compact and is half the depth of the Amaran 198. The outer case is made of plastic as well as the buttons to control the fixture.

In addition to improving on the key features of the 198, the Amaran F7 also has a few extra tricks up its sleeve. 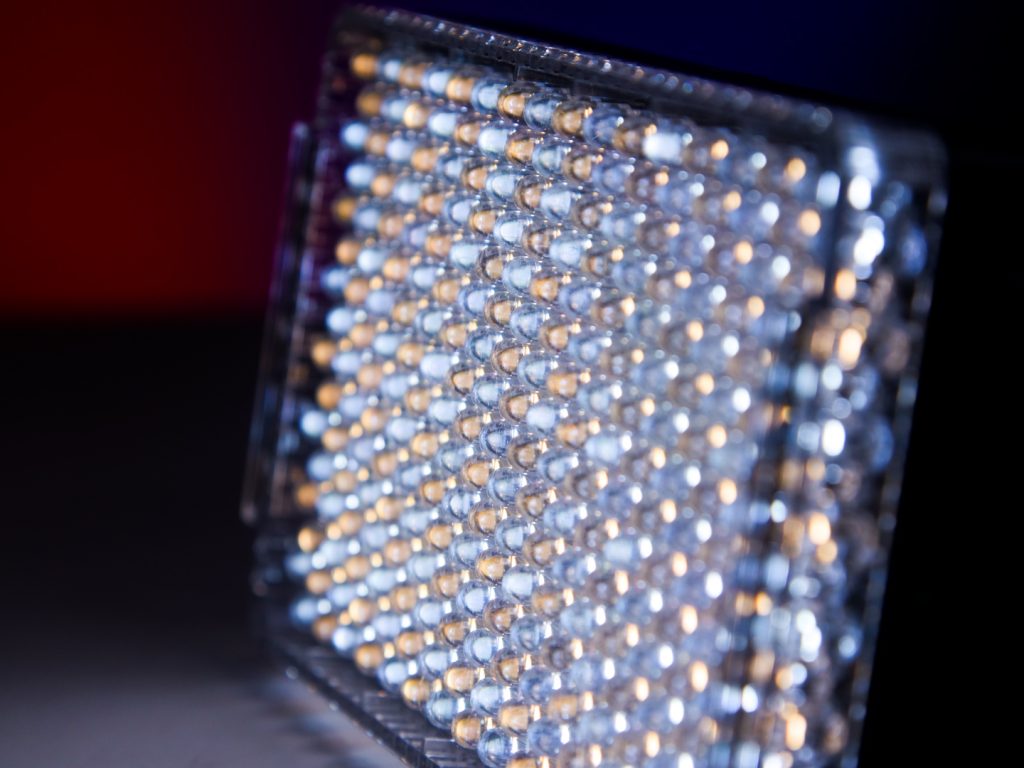 The Aputure Amaran F7 is bi-colour with 100% output at 5600K. Bi-colour lights generally only have 50% of the output of a similar daylight panel because they alternate every other LED between 3200k and 5600k. The Amaran F7 solves this problem by adjusting the colour range of the LEDs from 3200k to 9500k. This places the middle colour temperature at 5600k. The F7 Bi-colour light has a 100% brightness daylight output.

The F7 can dim all the way to zero percent while maintaining colour balance throughout the range. Aputure states it’s taken a few years to achieve this.

To change the settings the F7 has a multi-function push dial. Simply push the dial in to activate the colour mode or output setting.

I tested the Amaran F7 with a Sekonic C-700-U from half a meter with the fixture set to 100% output. 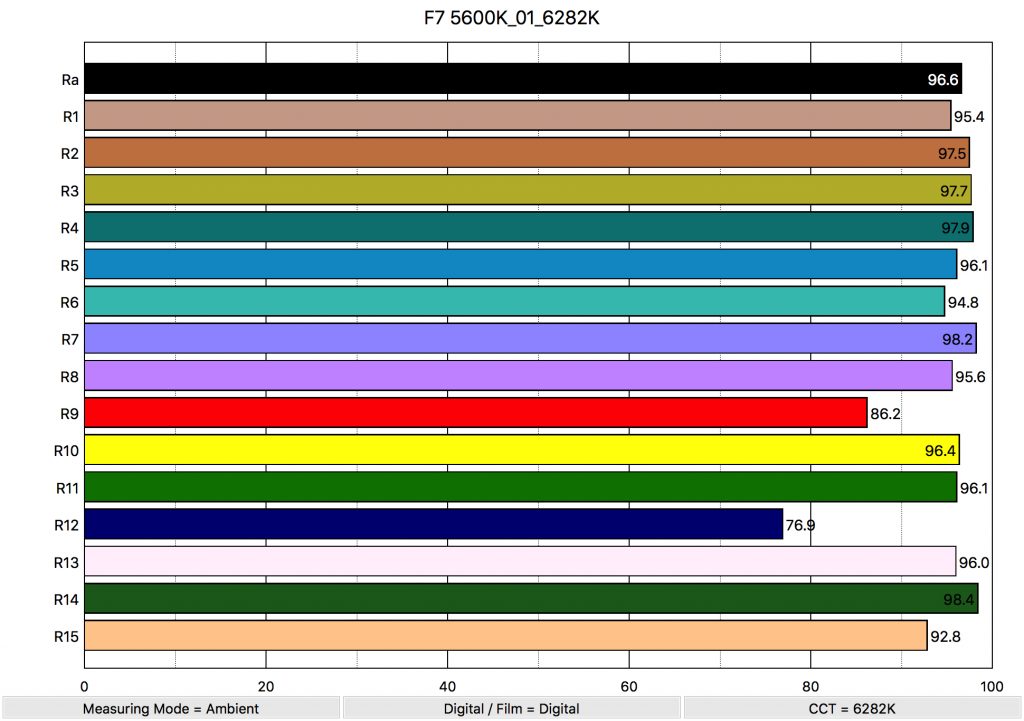 At 5600K the average CRI came in at 96.6. Extended CRI is 94.4. The F7 has a very slight Magenta push. The Sekonic shows a 0.3 green for correction. The meter also shows at 5600K the fixture is a little cooler coming in at 6282K. I’ve found many LED lights tend to rate with a higher colour temp. That’s why having a colour meter is a good idea if you are mixing different brands together. Another way to set the colour temp is using the camera. Some will give you the colour info after white balancing. Also, bi-colour options are the best when mixing since you can dial them in to match. Overall these are very good scores for a light at this price point. 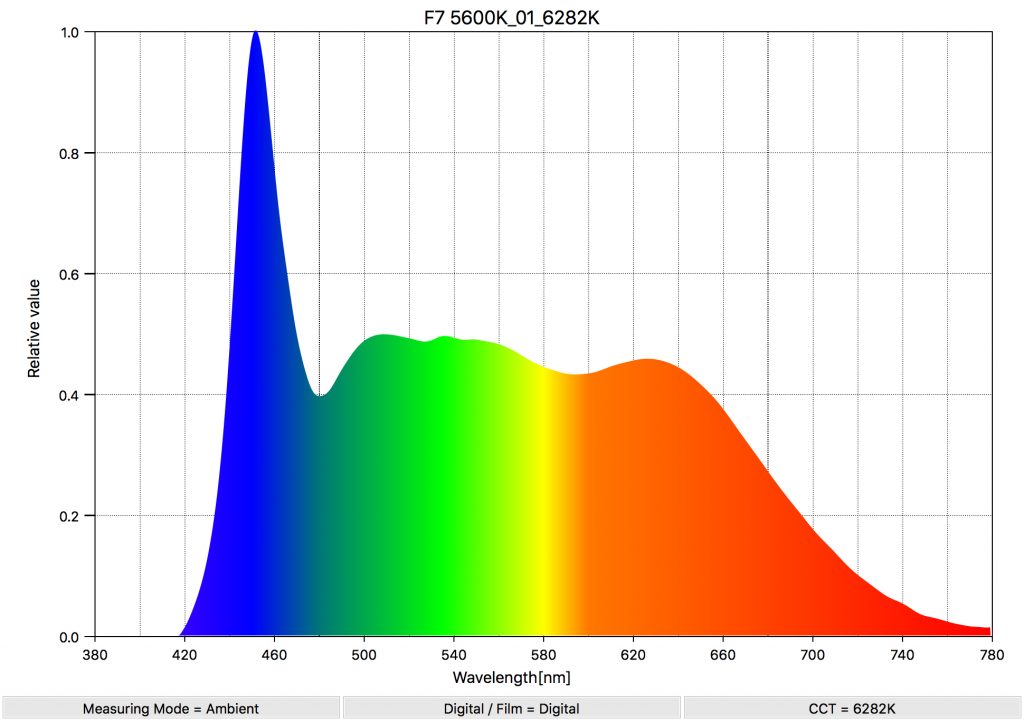 The Aputure Amaran F7 from half a meter came in at 3190 LUX. This is approximately half the output at 5600K due to the fixture using less of the cooler LEDs to achieve this colour temperature. 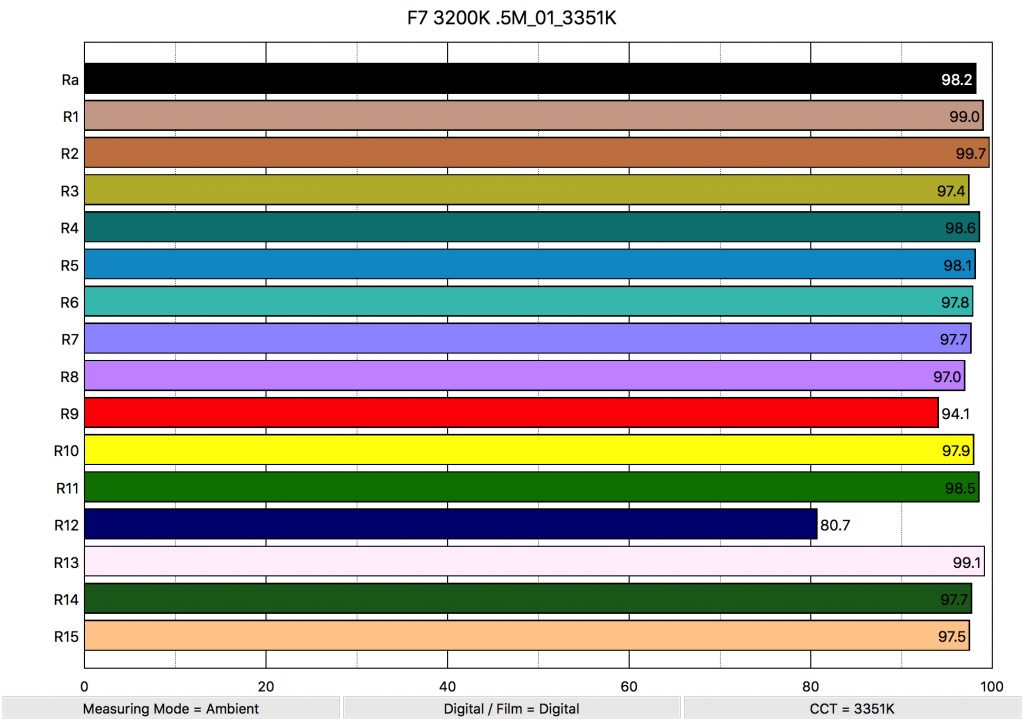 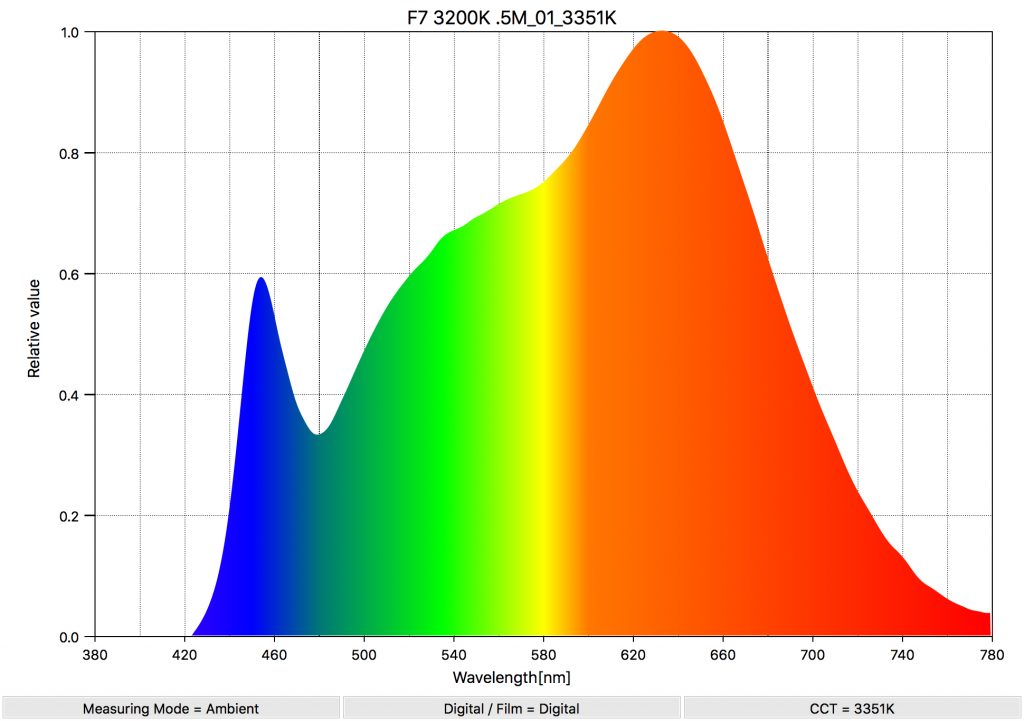 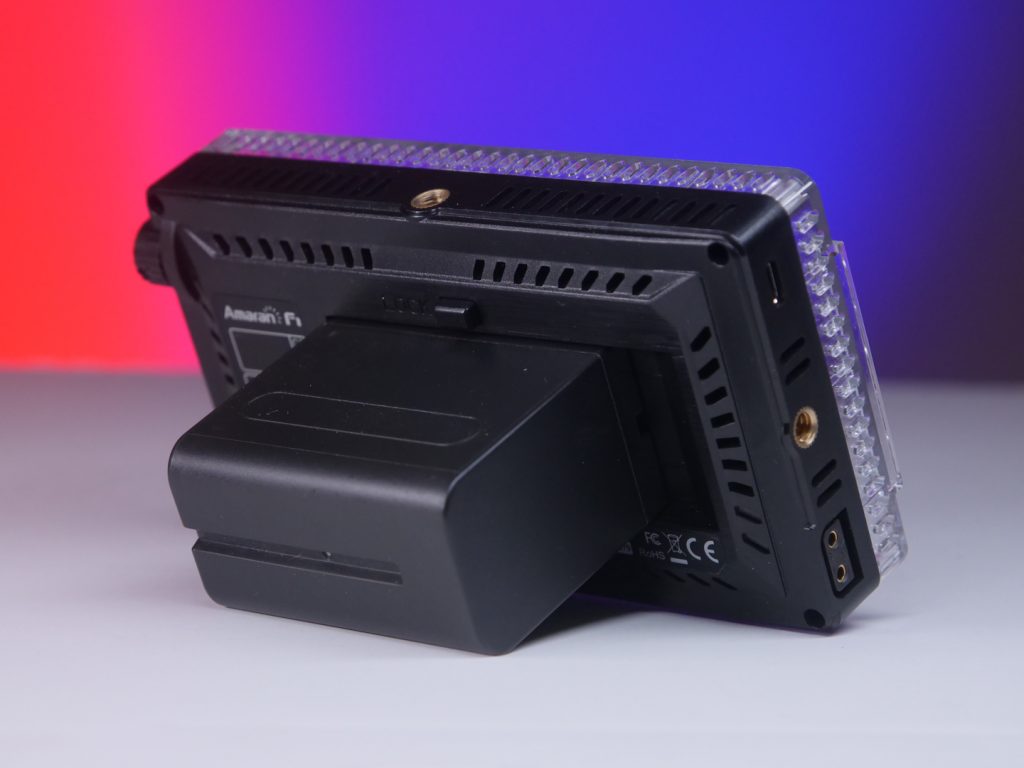 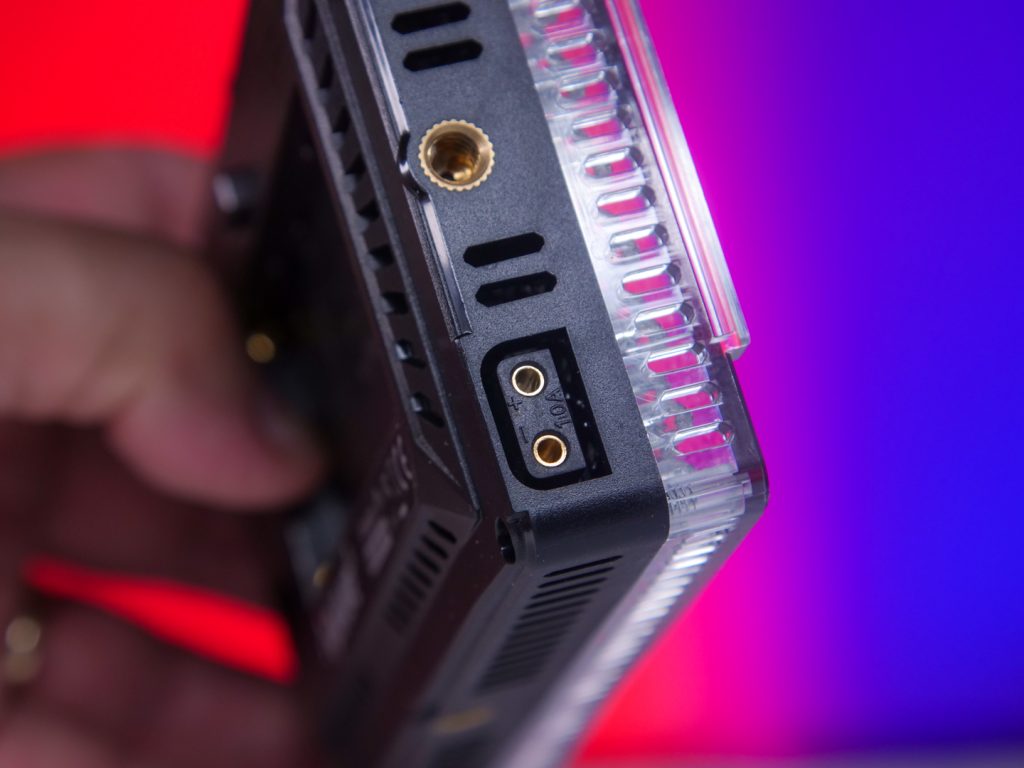 Another option for powering the F7 is with the D-tap on the side. While both the Amaran F7 and MX can be used as on-camera lights, the F7 is designed specifically to be an on-camera light in both form factor and function. Aputure talked to ENG shooters asking them what their needs were for a light. In addition to higher daylight output with a bi-colour fixture was the addition of the powering with larger batteries used to power the camera. With the onboard D-tap, you can do just that. 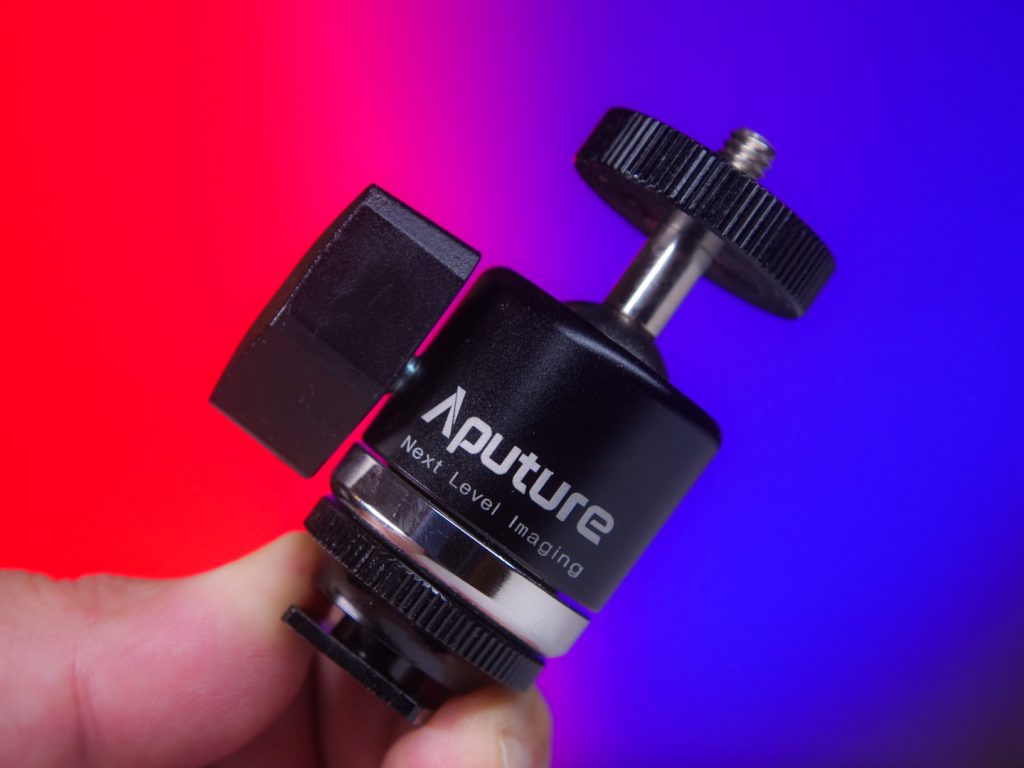 The F7 kit includes a ball head that is a new design and much improved from previous models included in Aputure kits. I will say it is better. It feels much more solid and the locking knob is nice and big to get it locked down tight. Reminds me of a favourite of mine the Manfrotto 492LCD Micro Ball Head ($56 USD) 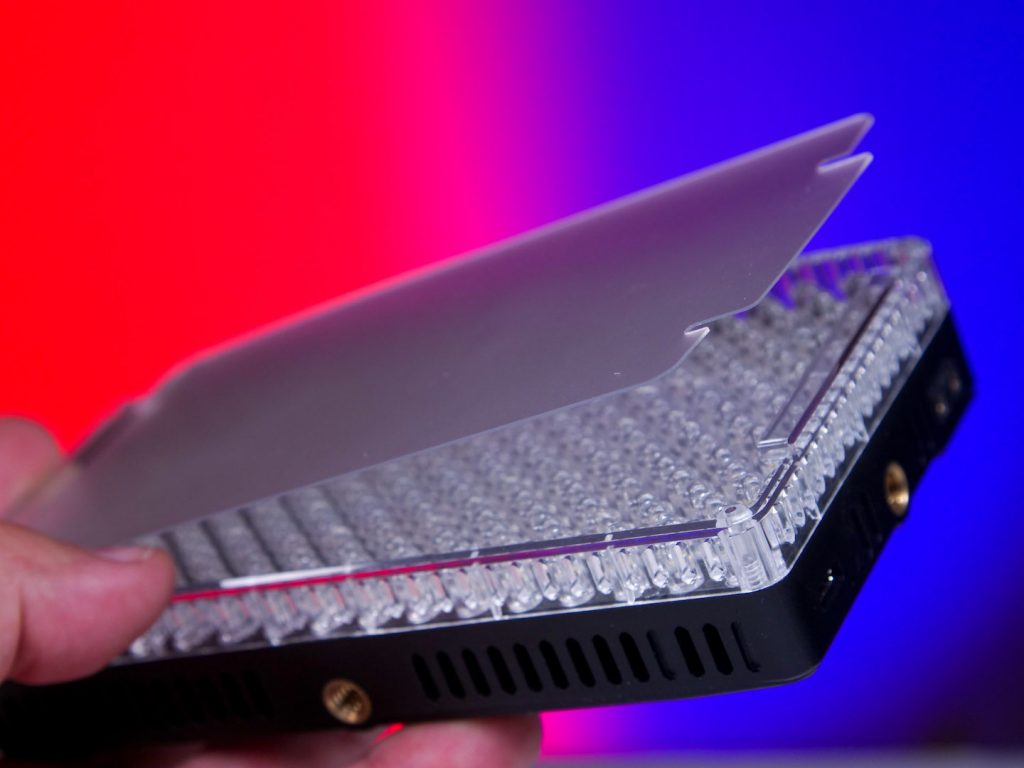 Also included is a plastic diffuser that slides into a notch on both ends. I didn’t find the diffusion to be very effective however it does hold other gels and diffusion in place.

The Amaran F7 is now available for $98 USD 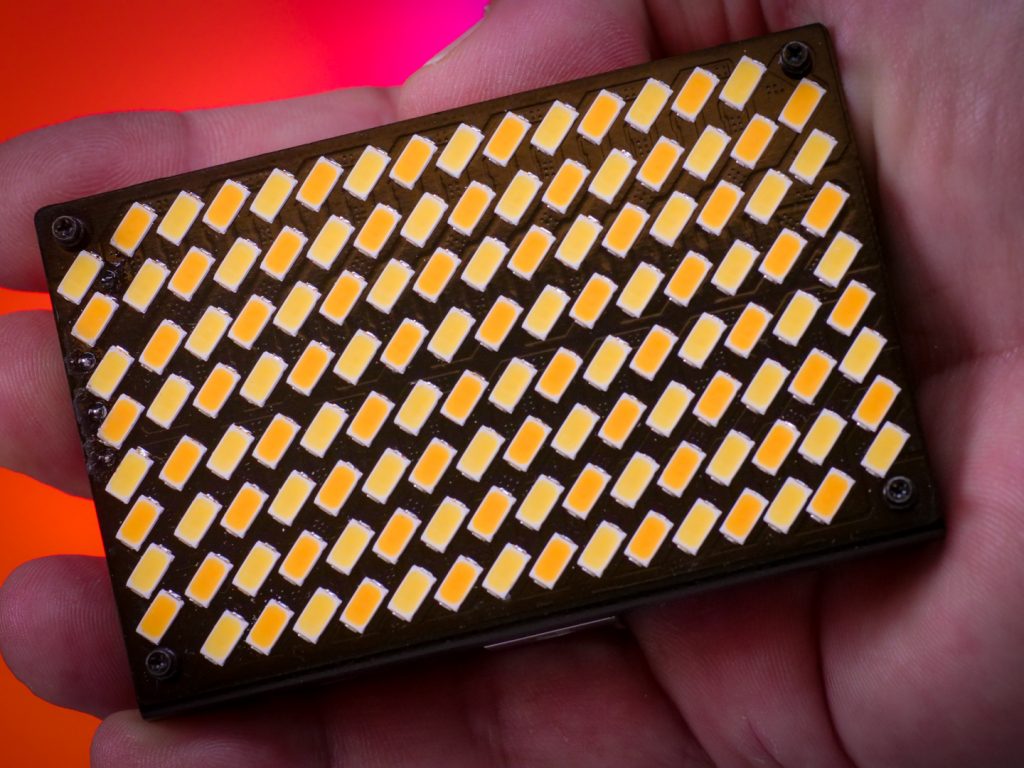 Next up is the industrial strength 9.9-ounce Amaran MX. Aputure took the popular Amaran AL-M9 and gave it an aircraft-grade aluminum build similar to the Tri-8. It’s build quality isn’t the only upgrade as the output is up to three times that of the M9. A boost feature increases the output approximately four times that of the m9 for sixty seconds for a quick punch of light. Interesting idea. This will cost you runtime but if you need it, you have it available. 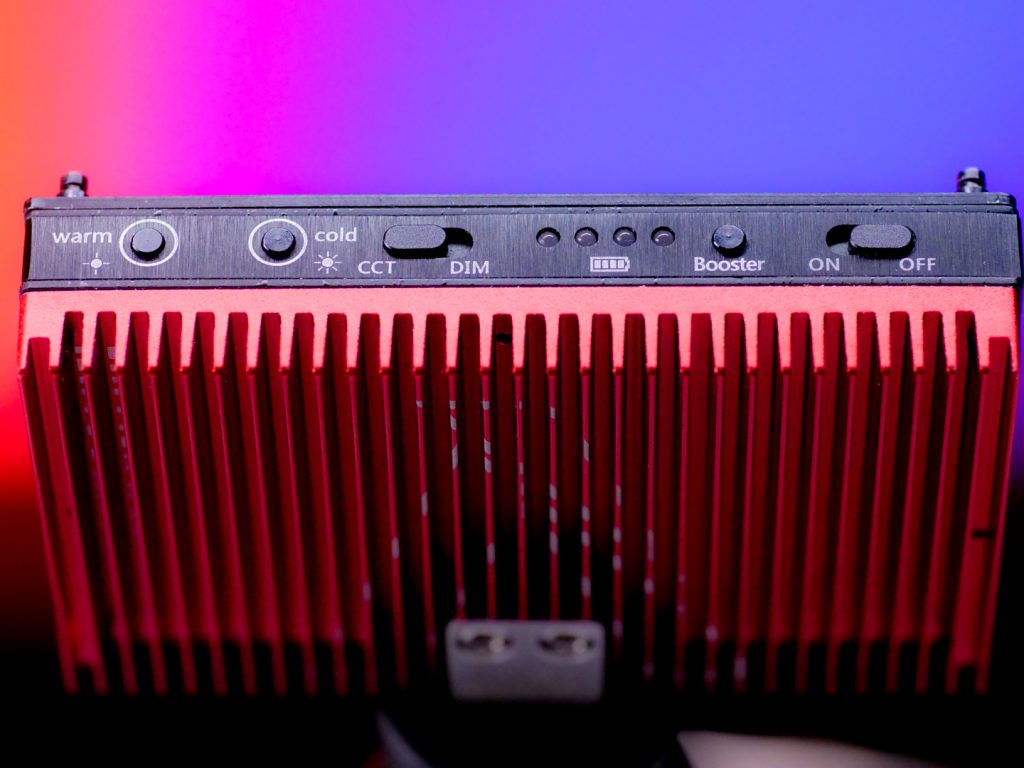 The controls are all found on the top of the Amaran MX. A switch is used to select between changing the colour temperature or brightness. The two buttons are then used to adjust the settings. 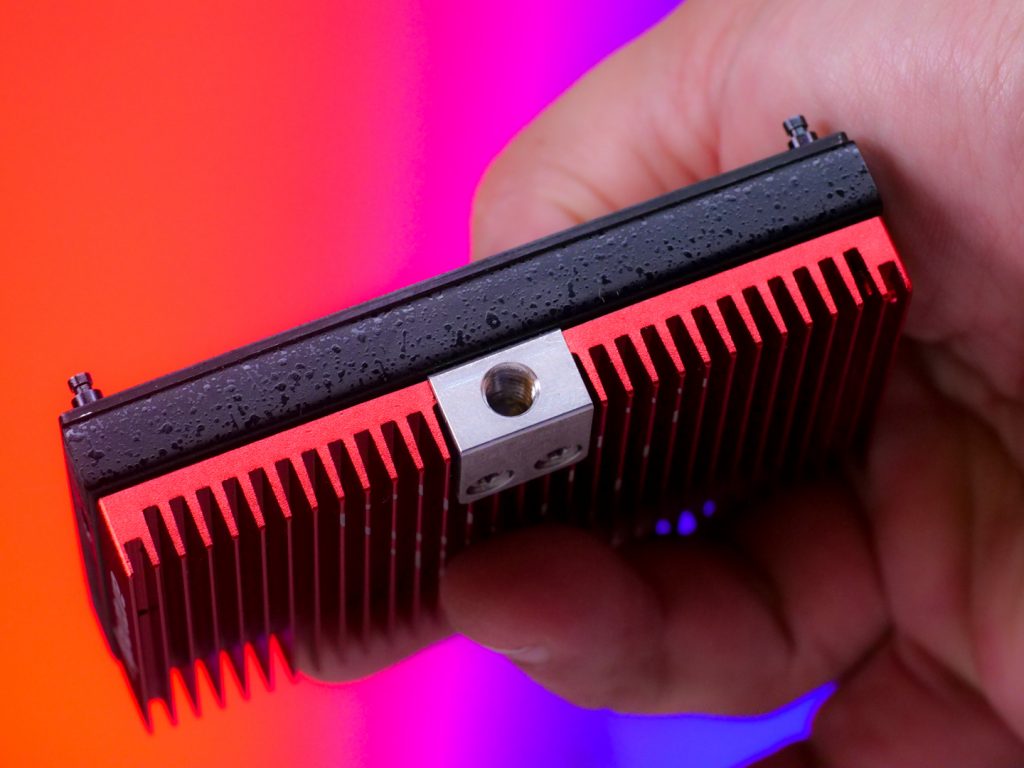 To mount the Amaran MX there is a 1/4″-20 tap on the bottom. This lets the user mount it in multiple ways with different types of hardware from ball heads to articulating arms and clamps. 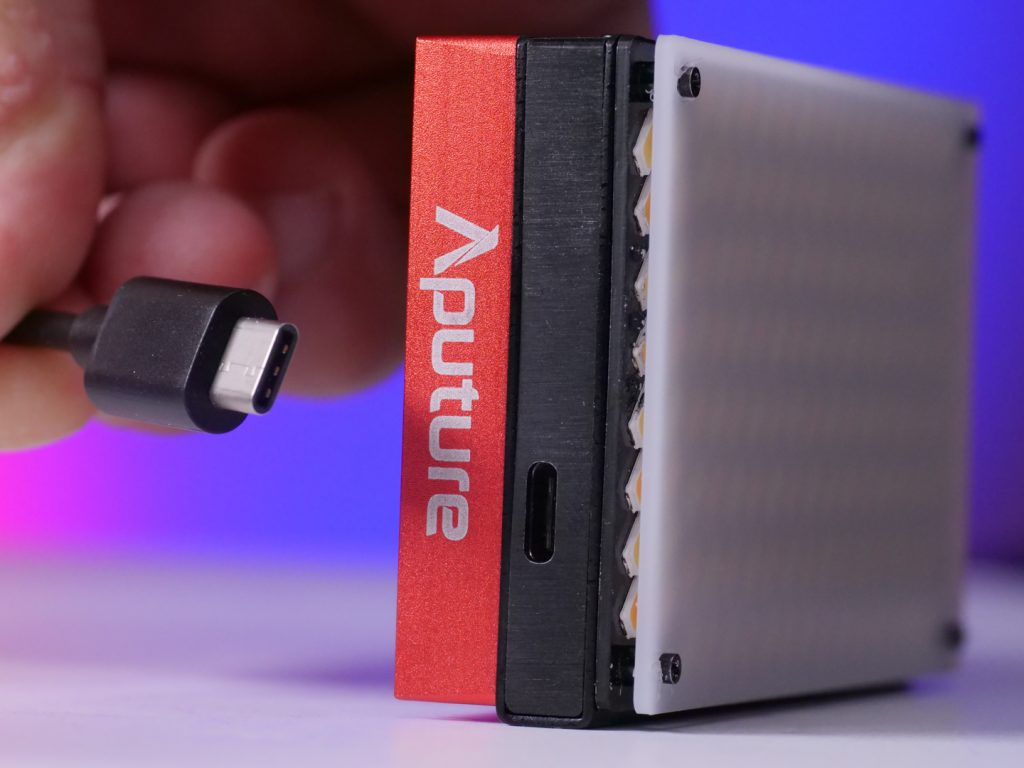 The Amaran MX like the M9 has a built-in lithium battery that is recharged with an included standard 5V USB C cable. Simply plug it into a USB input and charge away. Aputure rates the maximum power runtime of the light at 40 minutes and over 5 hours when running at minimum power.

The Amaran MX doesn’t have colour temperature settings. Instead, it uses four levels of change with two buttons in steps. All test are from taken at half a meter.

In order to get close to 5600K, I clicked one step warmer and got a reading of 5501K at full daylight the reading was 6275K. Below are the scores with the light set one click warmer since it was so close to the 5600K goal.

With the MX at full daylight one-click warmer. 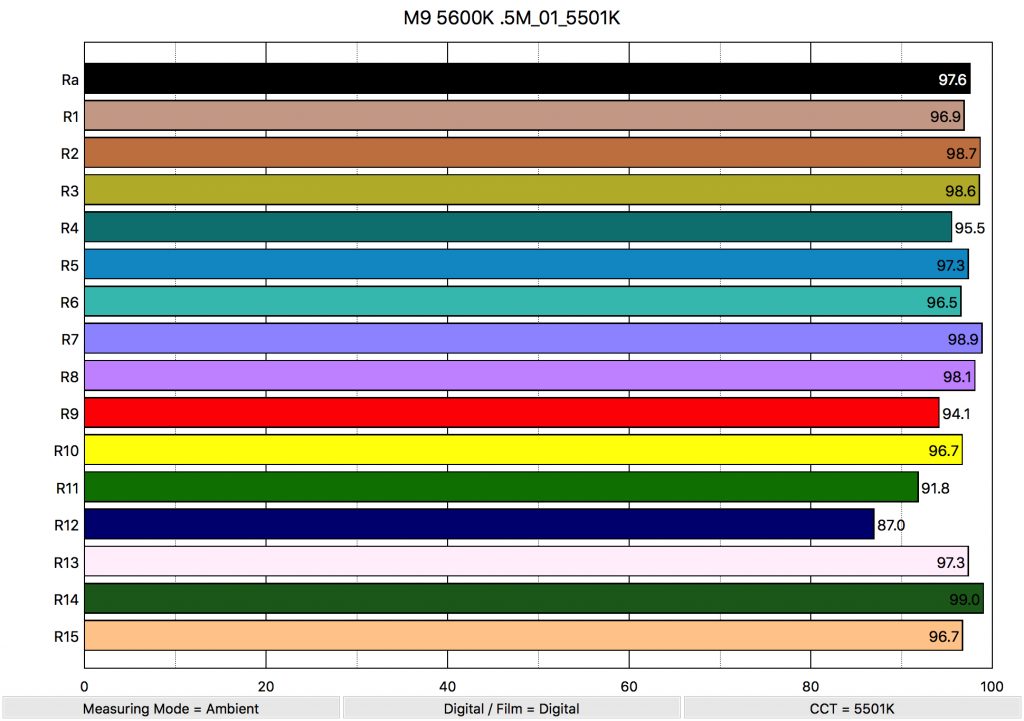 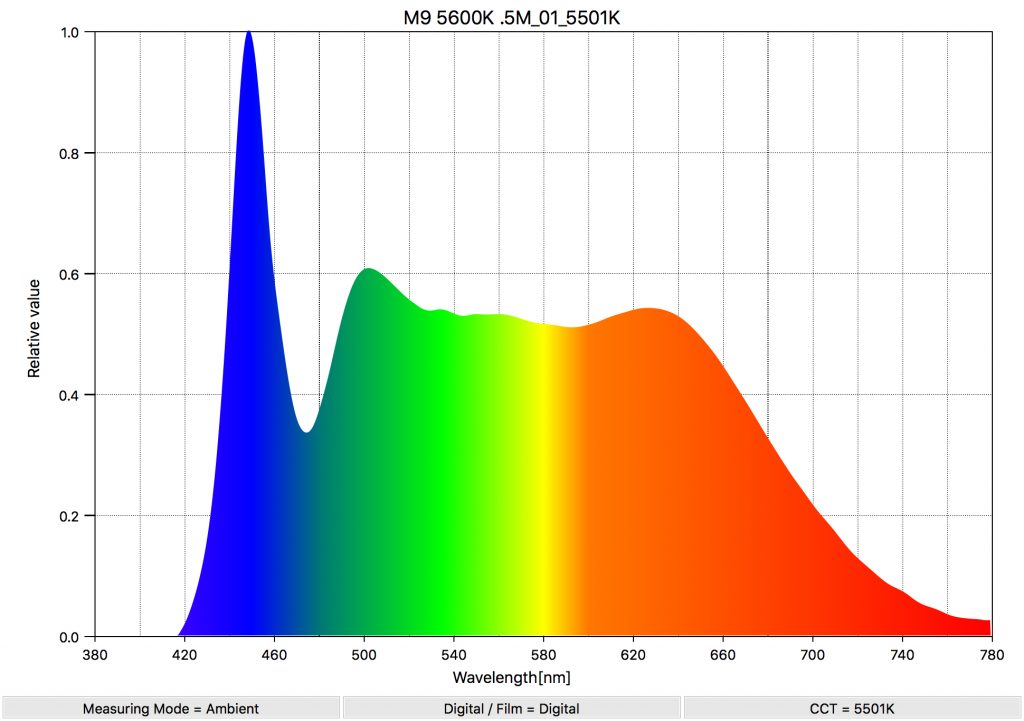 The MX test scores are very good. No colour shift at one-click warmer.

The MX at full tungsten or four-clicks to full warm was very close to 3200K tungsten with a score of 3020K.  Below are the full test scores.

At full tungsten, the MX scored at 902 LUX 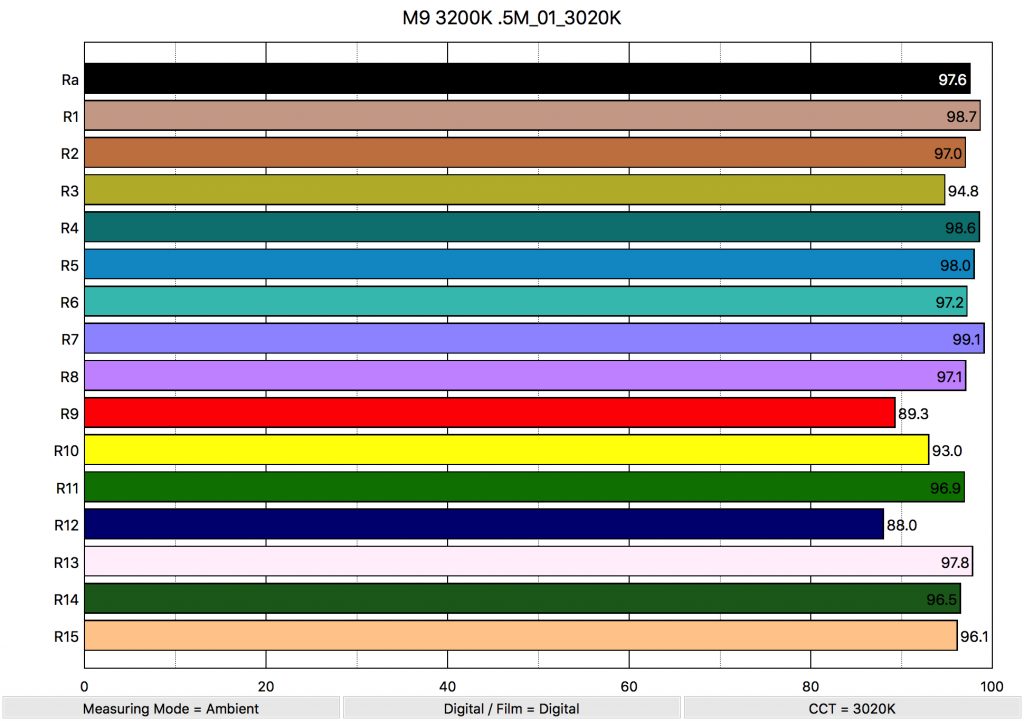 The average CRI scored at 97.6 with very solid readings from all the colour values. 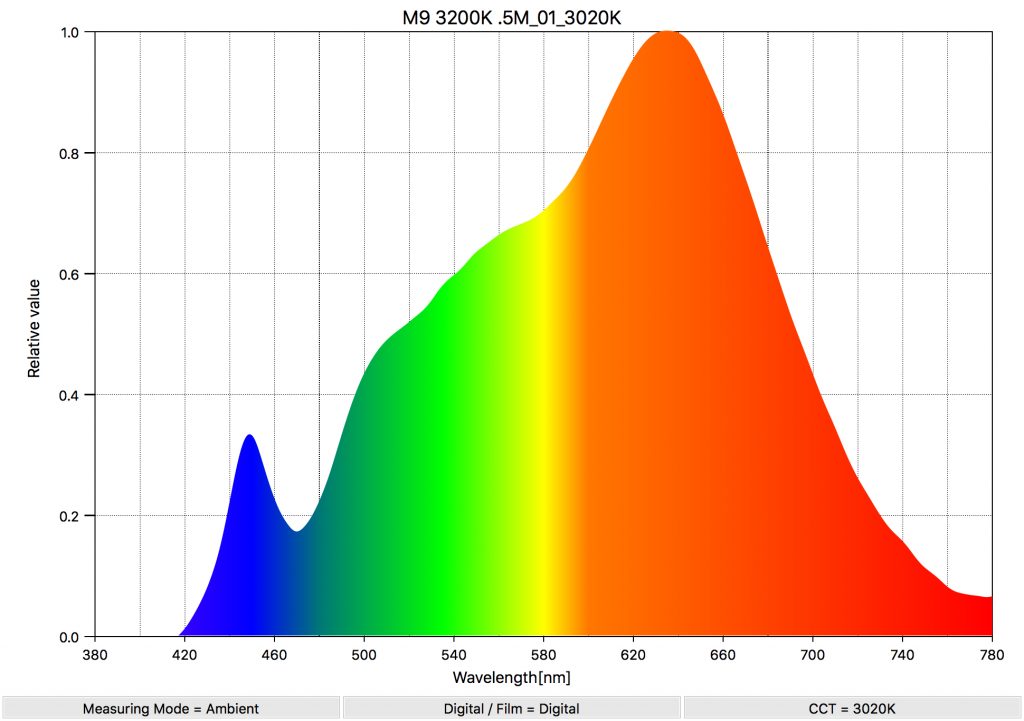 The Amaran MX doesn’t appear to have any colour shift. 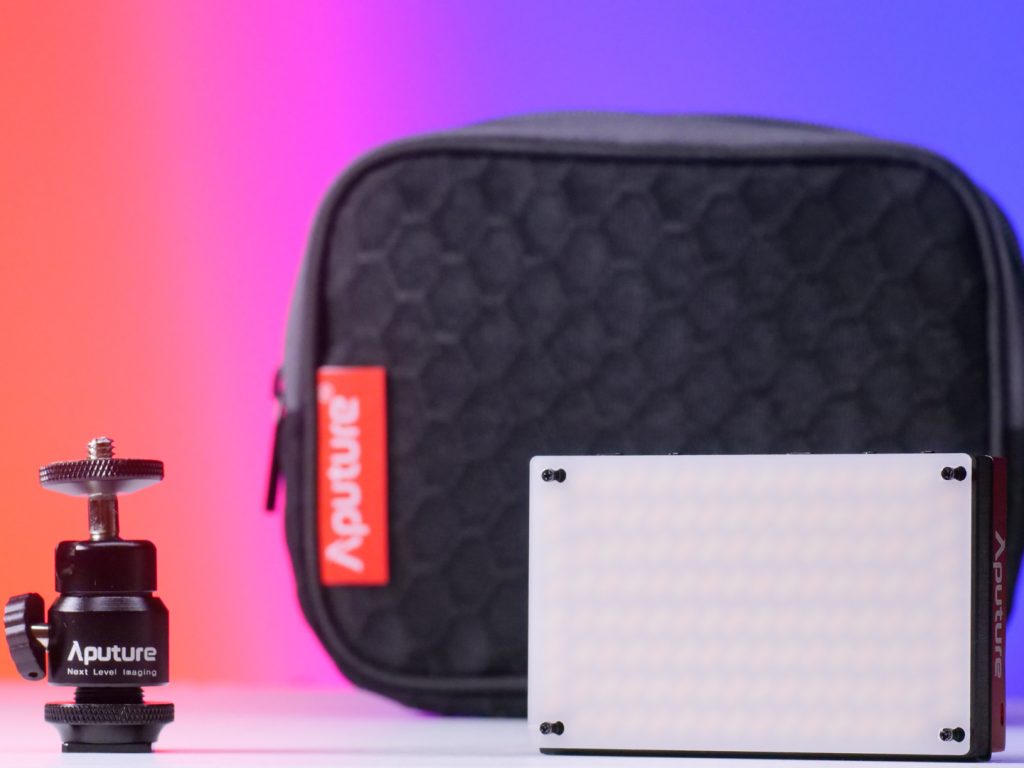 The Amaran MX comes with a diffuser however with the prototype shown above it mounts with four pins. The production model will use four magnets like the MX has. Included with the light is a soft case, mini ball head and USB-C cable for charging.

The Amaran MX is now available for $149.

All in all both the Amaran F7 and MX perform pretty well. The price is right for the budget filmmaker looking to add some small and bright fixtures into a scene or a quick and easy way to add a top light to a camera for the run and gun shooter. Having several of these in your kit might be a good way to always be able to add some light to any production.