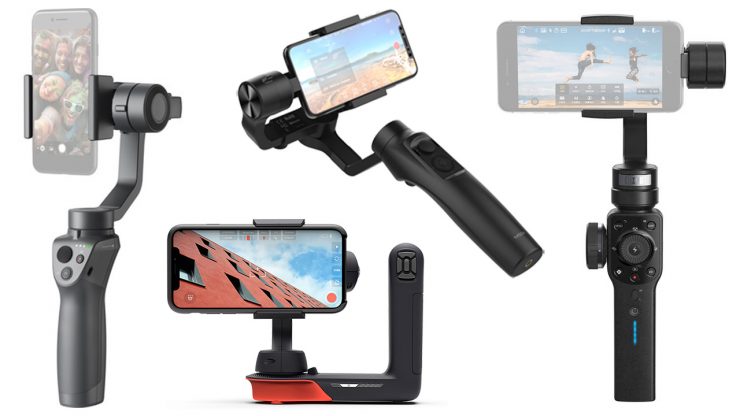 The camera capability of smartphones has been a big focus for the past few years, especially on the new iPhones, Google’s Pixel 2 & Samsung Galaxy phones. The new camera on Samsung’s Galaxy S9 was one of the biggest features that they promoted in the launch with a dual aperture of F1.5 and F2.4, it can even capture HD at 960fps! Google’s Pixel 2 delivers stunning images and backs it up with unlimited cloud storage for photos and videos, Apple’s Instagram account is purely about #ShotoniPhone and we all know about the Portrait mode simulating shallow depth of field. It’s no wonder we are seeing more and more smartphone gimbals being released and of course, all of these phones can even shoot 4K 😉

The latest generation of smartphone gimbals feature more automatic modes for tracking subjects, automating time-lapses, stronger motors to support accessories like lenses, lights and microphones and even an interface to control the focus and zoom. I thought it was a good time to compare some of the newest gimbals recently released.

Announced at CES 2018, DJI’s new Osmo Mobile 2 is the successor to the Osmo Mobile announced a few years ago. The price has been cut to only $129 USD and offers an app with plenty of smart features to track subjects, create panoramas, time-lapse or hyper-lapse videos and has integrated live streaming. One feature that was on the original Osmo that has carried across is the lock button that locks off the motors but maintains the horizon level so you can do fast moves like a whip pan without having to wait for the gimbal to catch up or adjust settings. A zoom rocker is also found on the side.

The newest smartphone gimbal from Zhiyun-Tech adds many more buttons and a multipurpose handwheel to control focus or zoom. Just like DJI Osmo Mobile 2, Zhiyun-Tech has added a button on the back of the handgrip to activate the new “PhoneGO”  to lock off the motors for fast moves. To keep your device charged while using the Smooth 4 has a USB port on the tilt motor which can be used to charge the phone. You can also plug in a portable powerbank to charge the Smooth 4 while in use that will also charge the phone for continual runtime. The app also has integrated live streaming.

The MOZA Mini-Mi is the first smartphone gimbal to incorporate wireless charging into the phone mount. If your phone doesn’t have wireless charging, MOZA has also provided a USB port on the tilt motor to charge the device. In addition to the standard joystick for manual control, the MOZA Mini-Mi has a circular wheel which can be used to adjust camera settings as well as control focus and zoom.

The gimbal has eight modes as well as smart features for tracking subjects, automating timelapse and integrated live streaming.

Announced in December 2017, the Freefly Movi is set to ship in the coming weeks. Freefly has gone for a totally different design to the typical single handheld gimbal with a unique L shaped base which means you can easily set it down without having to add a mini tripod to the base of the gimbal. They have still provided a standard 1/4″-20 thread on the bottom so you can still mount it to other accessories like a gorilla pod.

The Movi is designed to work with iPhones only as the app is only available for iOS devices. The Movi draws in on Freefly’s extensive experience in the larger MōVI gimbals, also offering plenty of shooting modes.

They have kept the hardware interface simple with a control pad at the front and two buttons for start/stop record and mode trigger on the back.

Freefly has also designed the Movi to be able to work with Moment lenses with an adjustable counterweight for $79.

With an asking price of $299 USD, it is one of the more expensive options. At the time of its announcement, DJI only had the original Osmo Mobile which also retailed for $299 USD. It was only at the start of the year with the release of the Osmo Mobile 2 that they had slashed the price right down to $129 USD.

Only as good as the software

Like all gimbals, the hardware is only as good as the software. A lot of the smart features in these gimbals require you to use the manufacturer’s app so there is no point in having a gimbal that can track subjects or do automated moves if the app crashes or is hard to use. Calibrating and fine-tuning the motion can also make a big difference to how the gimbal performs and how you will use it.

You will want to do some research and take a look at the apps before purchasing one to see how intuitive and reliable the apps are. If you are planning to use an older mobile device, also make sure that the app is compatible with your device as some require the latest version of iOS or Android.

Do you really need a gimbal for your phone?

For those of you who shoot video on your smartphone, can you share your reason and what device you are using?

While you may not go out to create your next film on your smartphone (unless you are Steven Soderbergh), they can be a nice tool to have when travelling or on vacation, capturing content for for social media, creating a time-lapse or hyper-lapse and being able to live stream can be handy, maybe we’ll live stream some coverage straight from NAB 2018. Just having the ability to be creative with only your smartphone can sometimes be enough of a reason to have one, especially at some of the price points the smartphone gimbals go for.

The four listed in this article are the newest offerings with new models being released almost monthly from various manufacturers. There are plenty of bargains to be had as they usually drop the price of existing models if you don’t need all of the features of the newest models.

Do you use a smartphone gimbal or going to pick one up? Let us know your thoughts in the comment section.