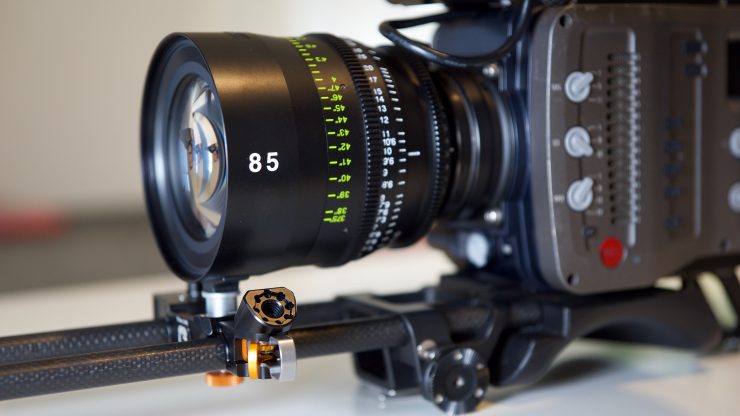 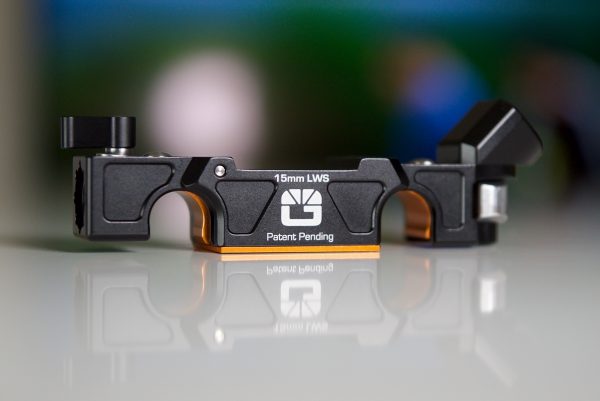 As their names suggest, the studio variants, are used with larger camera packages as the thicker rods provide more strength and less flex further away from the camera. The 15mm studio & 19mm studio rods are also spaced at 120mm away from the optical center in height allowing for larger lenses to be used compared to 85mm on the 15mm LWS standard.

The Morrissey 15mm LWS lens support uses a snap-on system so you can easily remove it or add it onto your rods without having to move around other accessories. The Morrissey comes with either a 3/8″ or 1/4″ support post with a kit option that includes both sized threads. 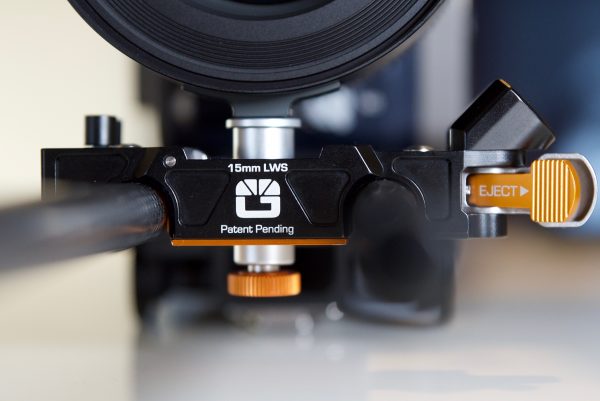 The support is made out of anodized aluminum and steel and provides support along the horizontal and vertical planes as well as removing any strain on your camera mount. The support quickly locks into place using its single thumb lever which can be mounted on either side. 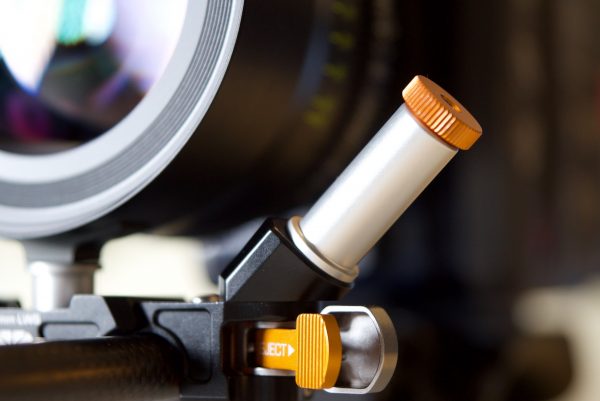 Just like the larger studio variants, this lens support also features two Arri standard interface 3/8″-16 accessory ports. This allows you to attach other accessories or arms if need be, or you can also attach the 3/8″-16 support post if you happen to be using the 1/4″ option instead on your lens. 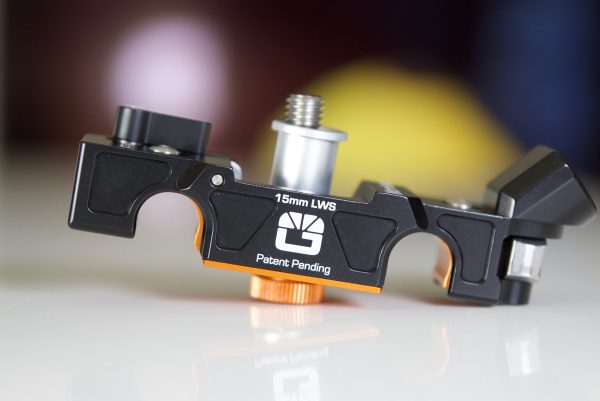 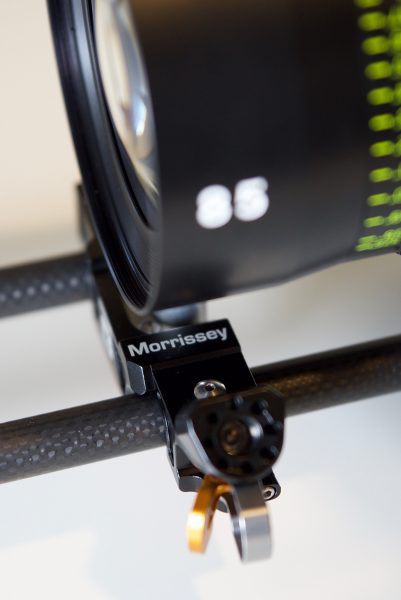 More often than not I use 15mm LWS rods on my camera setups, and if I’m using a particularly heavy lens or a camera that doesn’t have a PL mount, then a lens support is essential. That extra 10-20 seconds that it may take to put a lens support on is worth it considering the amount of money it would cost to repair or replace a broken camera mount if you don’t use a lens support. 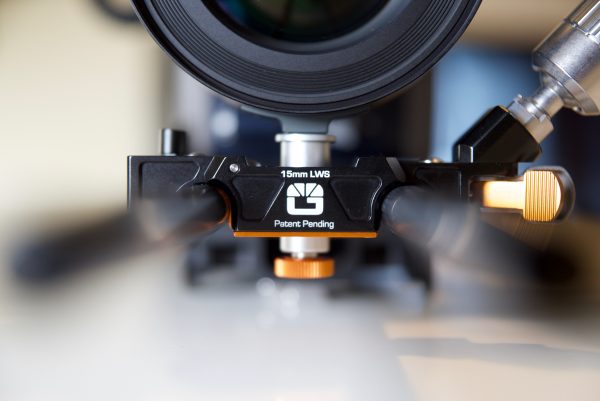 I wanted to see just how well it works out in the field. At only 197g (6.9oz), it doesn’t add much weight to your camera. I have tried numerous lens supports over the years and I’ve never really been that happy with any of them. I was hoping that the Bright Tangerine offering wasn’t going to be another one of those lens supports that ended up in one of my drawers gathering dust. 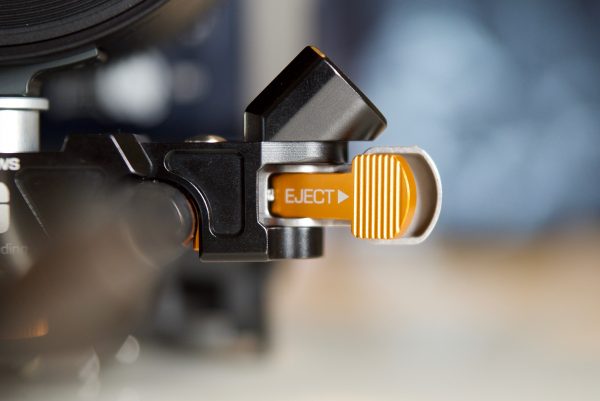 I’ve come to expect a certain level of quality from Bright Tangerine and the Morrissey 15mm LWS doesn’t disappoint. It’s beautifully made and the anodized parts are coloured in the traditional Bright Tangerine orange.

With a lens support, you don’t need to try and reinvent the wheel, all you need to do is make sure that it is easy to use and that it supports a lens correctly. 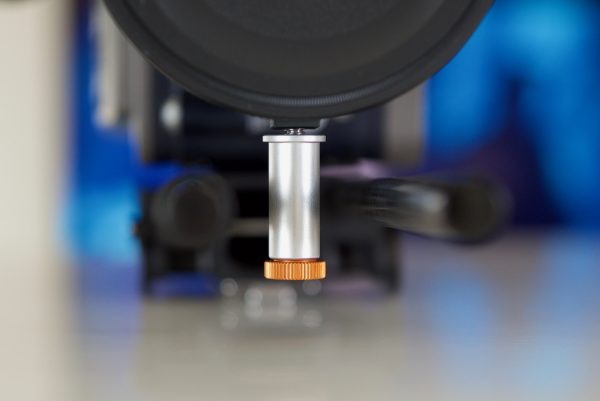 The first thing to do is to attach the 1/4″ or 3/8″ support posts to your lens before you do anything else. 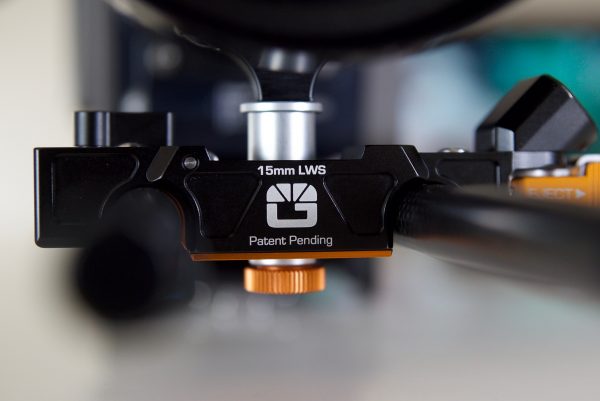 Then you load the lens support onto your 15mm LWS rods and slide it down to the correct position where it docks with the support post. 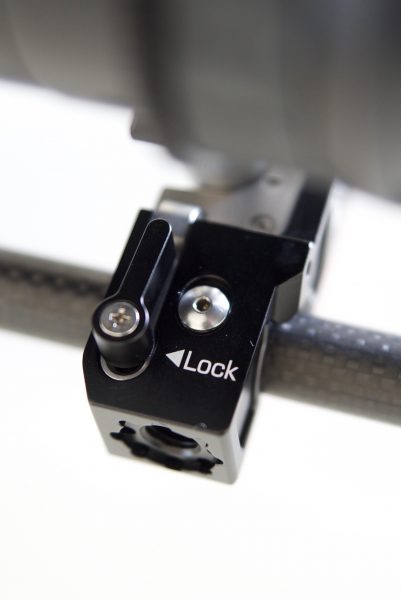 You then tighten the adjustment knob on the other side of the lens support to secure the support post. 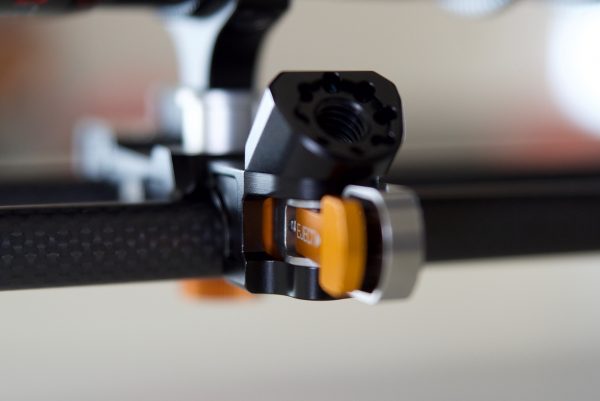 Once you have it in the desired spot you just press in on the thumb lever and move it to the center position. This locks it into place and secures the lens support onto the rods.

To take it off you untighten the lever to disengage the locking mechanism that is holding the support post. You then press in on the thumb lever that is holding the LWS on the 15mm rails and either move it clockwise or counterclockwise until it disengages from the rods. The reason it can be disengaged in either direction is that you may be using something else on the 15mm rods either in front or behind the lens support. While I can see why the Bright Tangerine has designed the single thumb lever to move in either direction, I wish the center lock position engaged with a click so you know precisely when it’s in the right position.

I found this whole process to be pretty easy to do and it certainly locks your lens into place and supports it correctly. 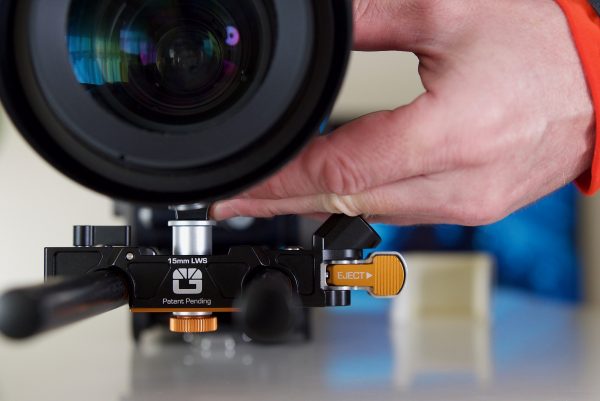 The only thing I don’t like is that the accessory ports that can be found on both sides of the support, can get in your way (depending on what lens you are using). Conversely I did find I could almost rest my hand on this docking mount when I was adjusting focus, but I’m not convinced that would be comfortable to do over long periods of time. Depending on the size of the lens, you could put the angled accessory mount on the other side. What Bright Tangerine could also do is make a little adjustable support that you could rest your palm on while you are focussing, but that wouldn’t necessarily work for all lenses. 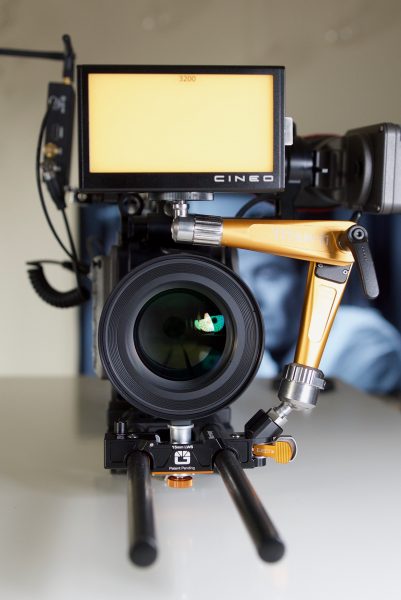 I did like the ability to be able to attach accessories such as a monitor arm to the lens support. I found it was a nice way to mount a top light right above the lens, which is always handy in run and gun situations.

I would have also liked to have seen Bright Tangerine make a universal rolling v-bracket that could be attached to the Morrissey for those times when you are using heavy lenses that don’t have a built-in lens support. 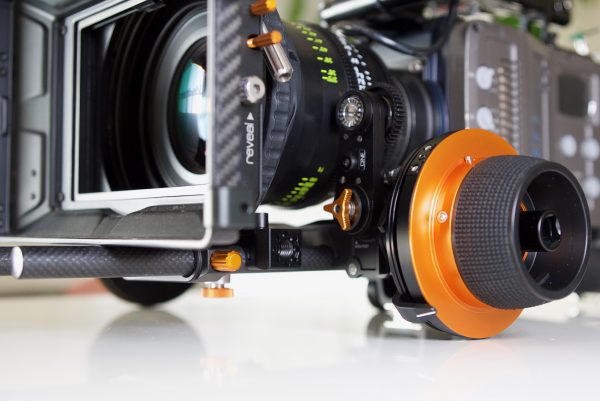 I tried out the Morrissey with a variety of lenses as well as with a follow focus and a matte box attached. I found that it could be used in all these configurations without any problems. 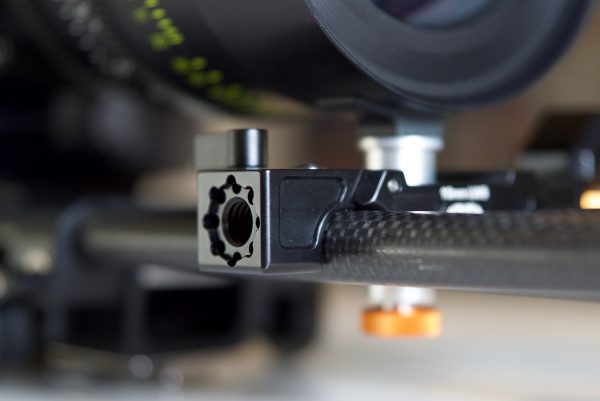 Additional support posts can be purchased for $19. 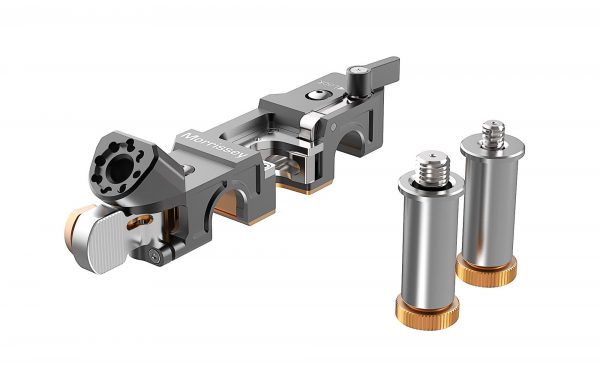 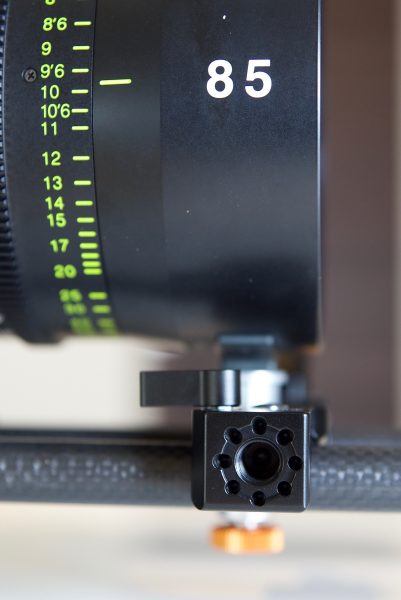 Lens supports aren’t sexy and they aren’t usually on the top of anyone’s shopping list, but they do play a vital role. They are a small investment that could potentially save you a lot of money and grief when you are using heavier lenses, particularly on cameras that don’t have a robust PL or locking mount. Breaking a lens mount or even damaging the lens itself is always a possibility unless you take precautions. 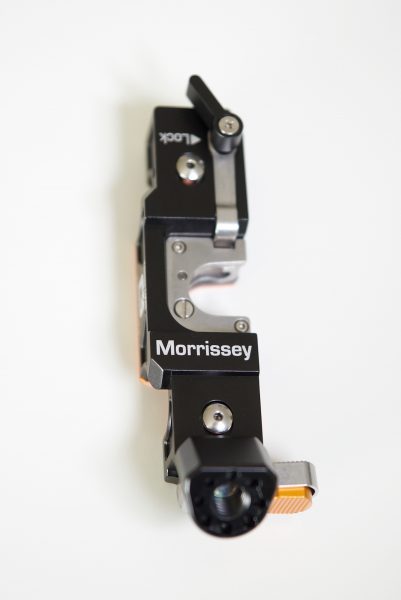 It’s best to think of a lens support as a seatbelt for your camera. It’s keeping the passenger (in this case the lens) safe and secure in the event of an accident. The Bright Tangerine Morrissey 15mm LWS Lens Support does its job, and it does it well. The $247 USD asking price is reasonable considering the cost of other higher end 15mm lens support systems. Lens supports are not something that you are going to have to replace if you get a good one, to begin with. For me, if I’m going to put a heavy $50,000 lens on my camera then I want a lens support that is up to the task and not something that could potentially break.

This lens support isn’t for everyone, but if you are routinely putting expensive, heavy glass on your camera then it’s well worth a look.