SHAPE Push Button Magic Arms have been around for 10 years, but recently they have started making versions with an ARRI standard 3/8-16 thread and anti-rotation pin connector. 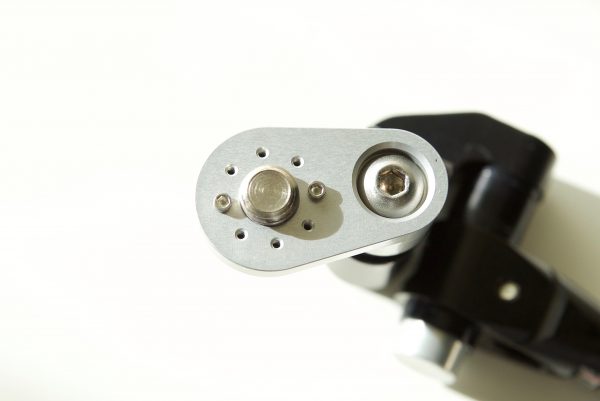 If you aren’t familiar with the SHAPE Push Button Magic Arms, let me fill you in. The Push Button Arms allow for precise and quick adjustments of your camera monitor with the help of push button technology. This patented technology allows the user to make quick and easy adjustments by simply pressing the button. When you press the button, it gives you 360 degrees of rotation to place whatever accessory you are using in the best position for your use. This same Push Button technology is used on many other SHAPE products, such as the Sony FS7 Remote Extension Handle. 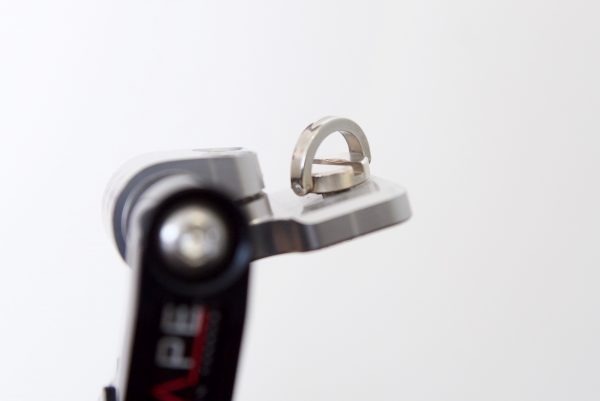 The arm can be used for supporting accessories such as a monitor, a viewfinder, a microphone, a camera light, etc. The 1/4-20 screw is mounted with a ‘bracket’ allowing you to manually fix the accessory to the arm without the need for a tool. 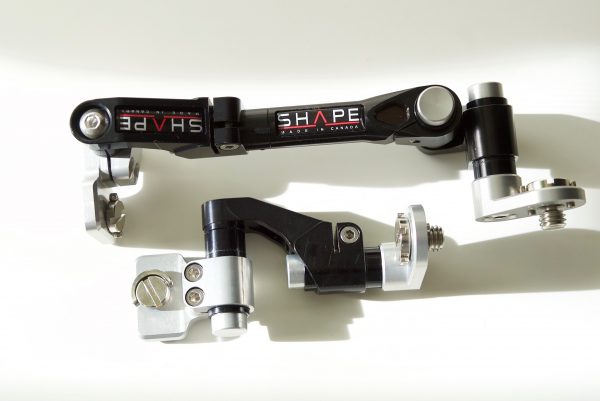 The arms come in two sizes- a 3.5″ (8.89 cm) version and a larger 6.5″ (16.51 cm) version. The small size features 2 Push Buttons, allowing you to make vertical and horizontal positioning adjustments of the camera accessory from the top or the bottom of the arm. The larger version has 4 Push Buttons. 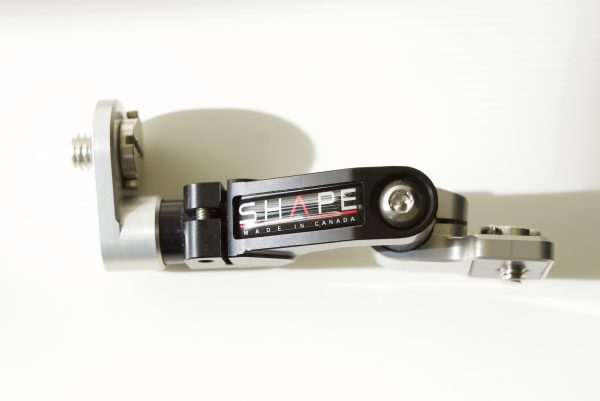 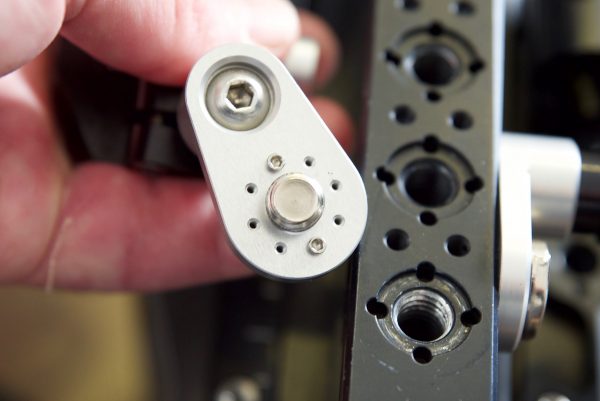 Let’s not do the twist

Doing the twist is fine if you are dancing to a Chubby Checker song, but twisting on a monitor arm is annoying, to say the least. There is nothing worse than using a monitor arm that twists around on your camera’s top handle or cheese plate. We have all had it happen, you go to move a monitor arm and the whole arm starts twisting at the connection point on your camera and starts coming loose. 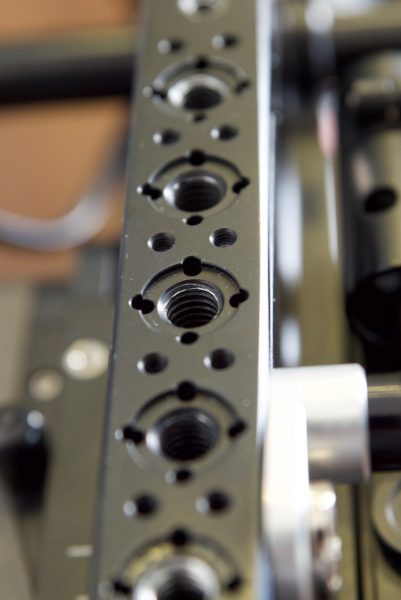 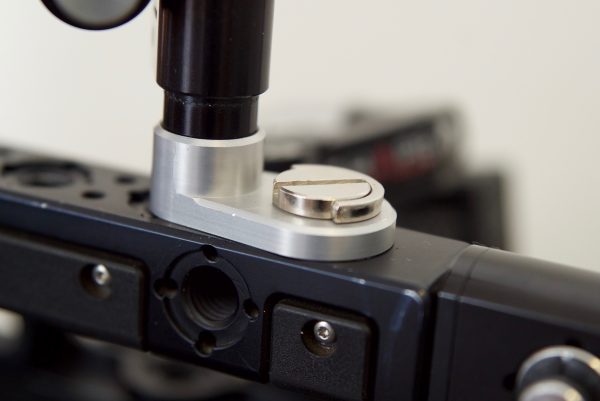 I have wasted countless hours, maybe even days, over my career re-tightening monitor arms that come loose at the connection point to the camera. The SHAPE solution stops that from happening, and once you tighten that arm down you don’t have to worry about it ever happening again.

So how are they to actually use? 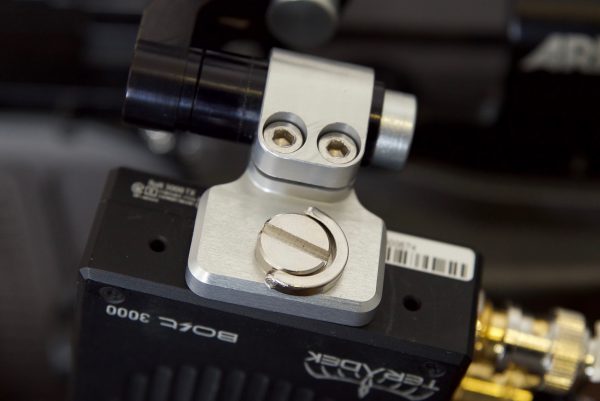 The SHAPE Push Button Magic Arms are a little different in design to most traditional monitor/accessory arms that you might be used to using. They don’t have any ball joints, so they aren’t as flexible as some other arms that are available. Where they do excel is when you want to move a monitor or an accessory to a certain place and have it stay there solidly without moving around. 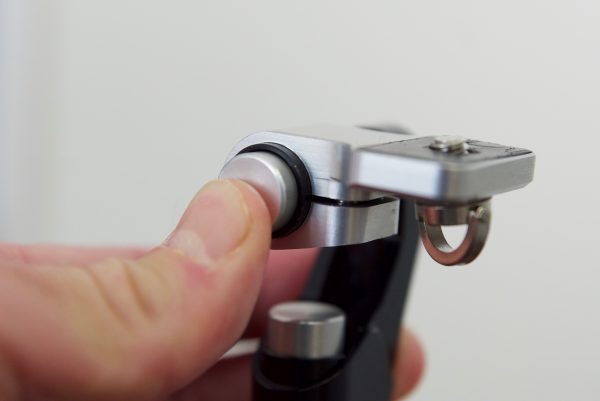 If you do need to reposition the arm you can simply press one of the buttons and move it on that part of the arms axis. Is this as quick as moving a traditional arm? Well no, but you don’t run into that normal problem of loosening an arm and having your whole monitor or accessory just drop unless you are supporting it with both hands.

Often I find that I’m only making small adjustments to monitors anyway, so the SHAPE system works well in that regard. For other accessories such as wireless receivers, you don’t want it moving around at all. You just want to lock it in place and not worry about it. 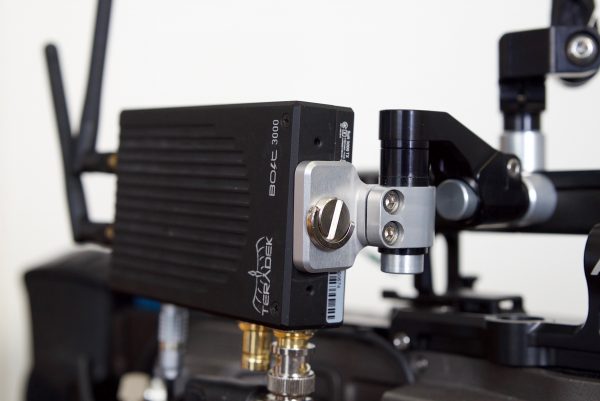 Having used them on my ARRI Amira I found that the connection point with anti-twist pins works really well. The small 3.5″ a great option for mounting wireless receivers. I could secure a Teradek Bolt receiver in the exact place I wanted, and if I needed to get access to the other side of the receiver or access to what was behind it on the camera I could just press a button and move it like a swing away matte box. This type of functionality is something small, but it makes a huge difference when you want to operate efficiently. 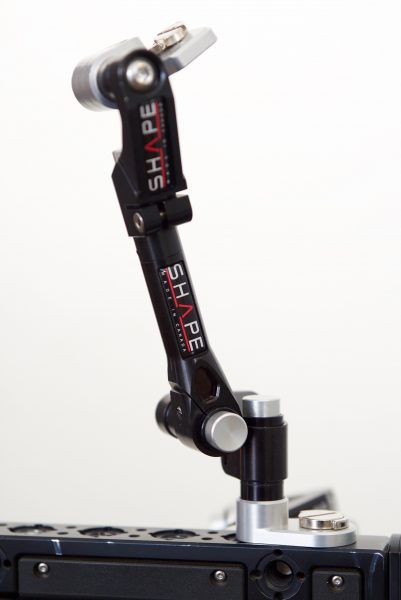 You would think that the larger 6.5″ version would be able to handle more weight than the 2 Button 3.5″, but that’s not the case. You have to remember that these are not constructed like normal monitor arms. The more connections and joints an arm has, the stronger it needs to be. The 6.5″ version only weighs 90g (3.17oz) more than the 3.5″ version. In the case of the SHAPE Push Button Magic Arms when it comes to payload capacity, bigger isn’t better. 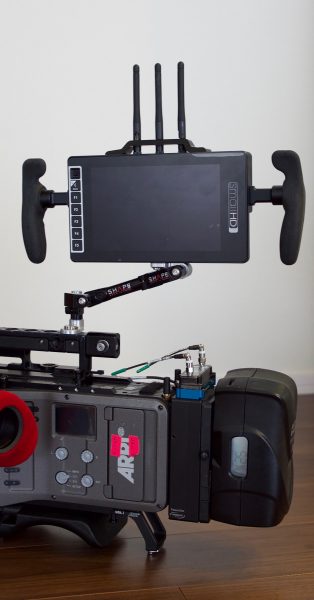 This is very evident when you are using the larger 6.5″ version. It doesn’t feel so solid once you start trying to put anything with a bit of weight on it. I tried attaching a SmallHD 703 Bolt wireless 7″ monitor/receiver which weighs in at 1.2kg (2.64lb), and in my opinion that was pushing the arms weight limit. On certain angles, (especially if you had the arm out vertically) the Push buttons would occasionally not lock back in and the arm would move. I would just be very careful about using anything too heavy on these arms. From my experience, I wouldn’t want to attach anything over 1kg (2.2lb). 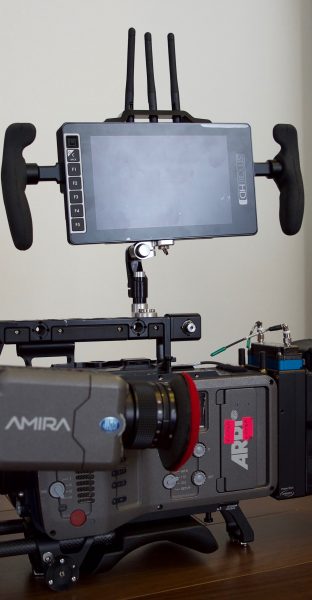 Using the smaller 3.5″ version with the same 703 Bolt wireless 7″ monitor/receiver was a lot sturdier though. 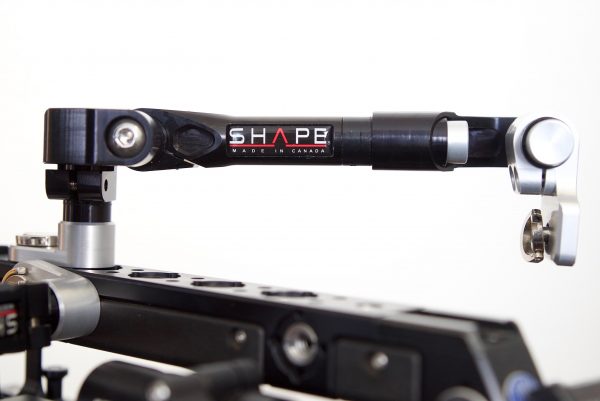 If you really want an ultra heavy duty monitor arm that has a fair amount of reach then the SHAPE system isn’t for you. It doesn’t have anywhere near the rigidity, strength and payload capacity of say a Bright Tangerine Titan arm.

As far as the design goes, the only thing I wish SHAPE would do is add a Push button quick release so you could just take a monitor or accessory straight off the arm without needing to screw it in. 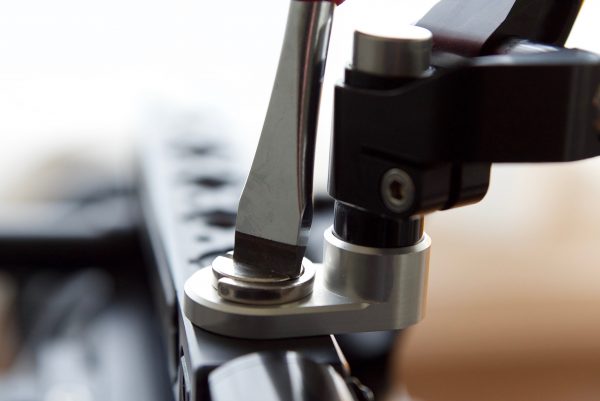 Even though the 1/4-20 screw is mounted with a ‘bracket’ allowing you to manually fix the accessory to the arm without the need for a tool, I did find that it helped to tighten it down properly with a screen driver.

SHAPE is not the first company to incorporate an ARRI standard 3/8-16 and anti-rotation pin. Wooden Camera’s Ultra Arm Monitor Mount is also available with one. 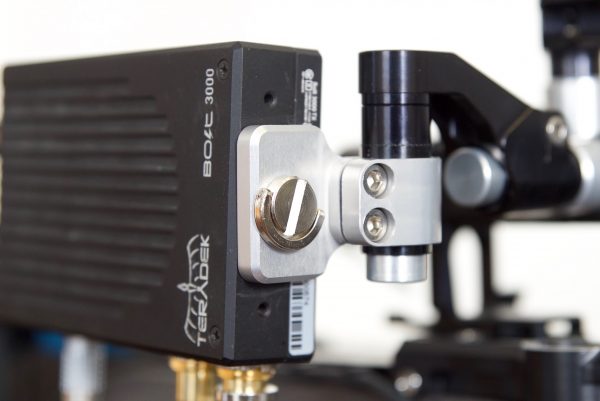 There is no such thing as the perfect monitor arm, if there was, we would all own one. The reason there are so many options out there on the market is that they all offer something different depending on your needs. Companies also patent certain technology meaning it’s unlikely we are ever going to see a perfect monitor mount. If you could combine features from three or four different companies monitor arms then you might be able to come close.

The SHAPE Push Button Magic Arms have been around for a decade, and it just goes to show how popular that design has been. If it ain’t broke, don’t fix it! While it’s not without its flaws, it certainly is a good option if you are looking at monitor/accessory arms. If you are an ARRI camera user/owner then the SHAPE Push Button Magic Arms make a lot of sense for securing and mounting smaller accessories and monitors. The ARRI standard mount with the locking pins makes a huge difference, and once you have used a connection like this it is hard to go back.