I spent a lot of years as a broadcast photojournalist shooting daily news stories with an ENG (Electronic News Gathering) camera equipped with a nice long parfocal servo zoom lens. Nothing makes shooting video easier than a proper ENG camera, and the lens is a big part of it.

Sure the camera body being longer and perfectly balanced on your shoulder is important but the user experience of that servo lens makes it great. No lens swapping needed due to the focal range and the lens holds focus since it’s parfocal. Zoom all the way in and focus then get Oh…. about a zillion different focal length shots without refocusing. Pure heaven.

With cinema cameras like the C200 that use an EF mount, most users including myself will mount a stills lens. Mainly because they are plentiful and inexpensive when compared to cinema lenses. In the past, we didn’t really have many options but today we do. Unfortunately, they are still in no way inexpensive but the price has come down a lot. 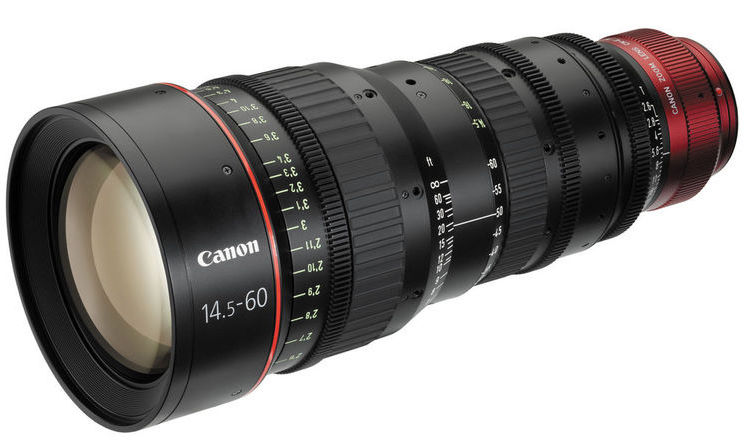 For example, the Canon CN-E 14.5-60mm T2.6 L S Cinema Zoom EF Mount lens cost $42,750 USD. This is a true cinema lens with no auto anything. Fully manual and built for filmmaking. Today we have the Fujinon and Canon options that cost far less.

Canon released two more affordable compact servo zoom lenses at the end of 2016. Though they are not quite as inexpensive as the Fujinon MK line, they do offer some features not found on the Fujinons. 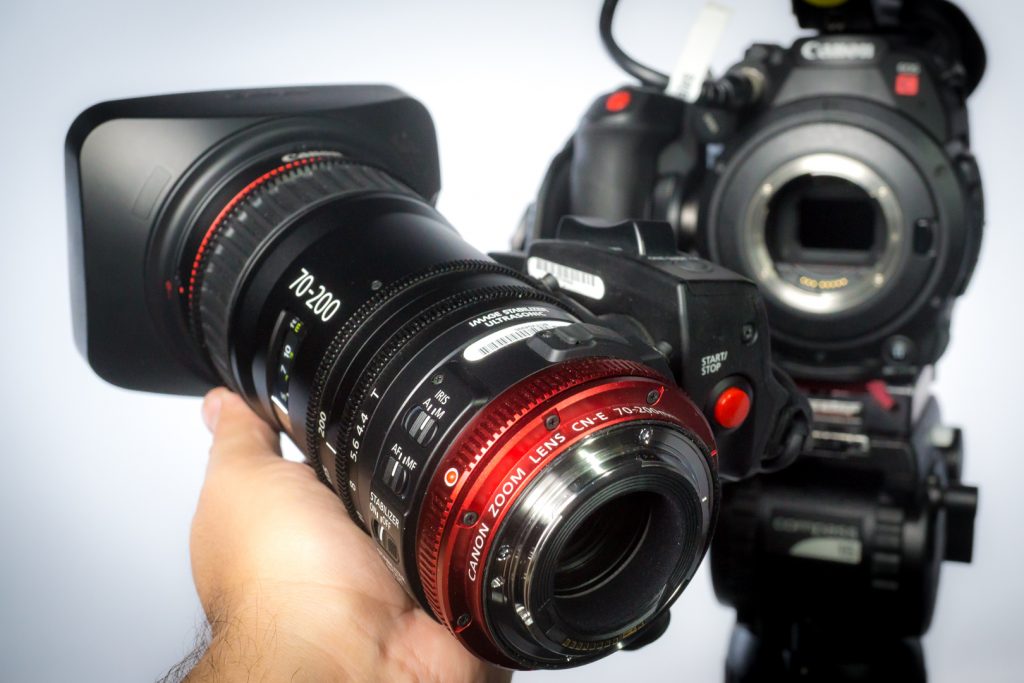 Having a constant T4.4 also makes it smaller and more compact. I know a lot of shooters don’t like T4.4 or F4 lenses but in order to keep the weight and cost down, somethings got to give. Aperture is one of them. The image quality of the 70-200 is really great. Being a true parfocal lens has a lot of advantages for shooting video.

Canon put two small buttons on the side to control the zoom, wide and tight. They don’t have a variable speed when pushing. Basically, you push the button and the lens zooms. You can change the speed setting with a dial on the lens. When you release the button the zoom stops. Unfortunately, no ease in or out. To get that kind of control the optional ZSG-C10 Zoom Rocker ($475) is needed. 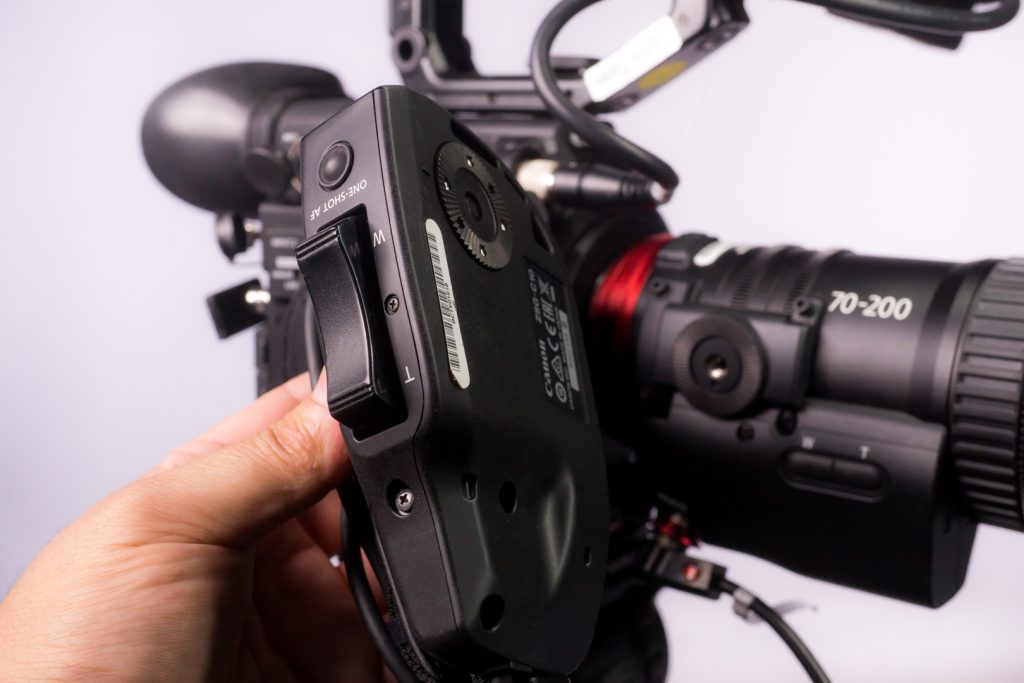 The Canon ZSG-C10 grip screws into the side of the lens with a rosette and can be adjusted to the users liking.  The grip has a record and one shot AF button. When attached to the C200, the camera’s grip gets really close to the zoom’s grip so if you were going handheld in a rig, I would take the cameras grip off. Unfortunately, in this configuration, you would also lose the extra controls on the camera grip. 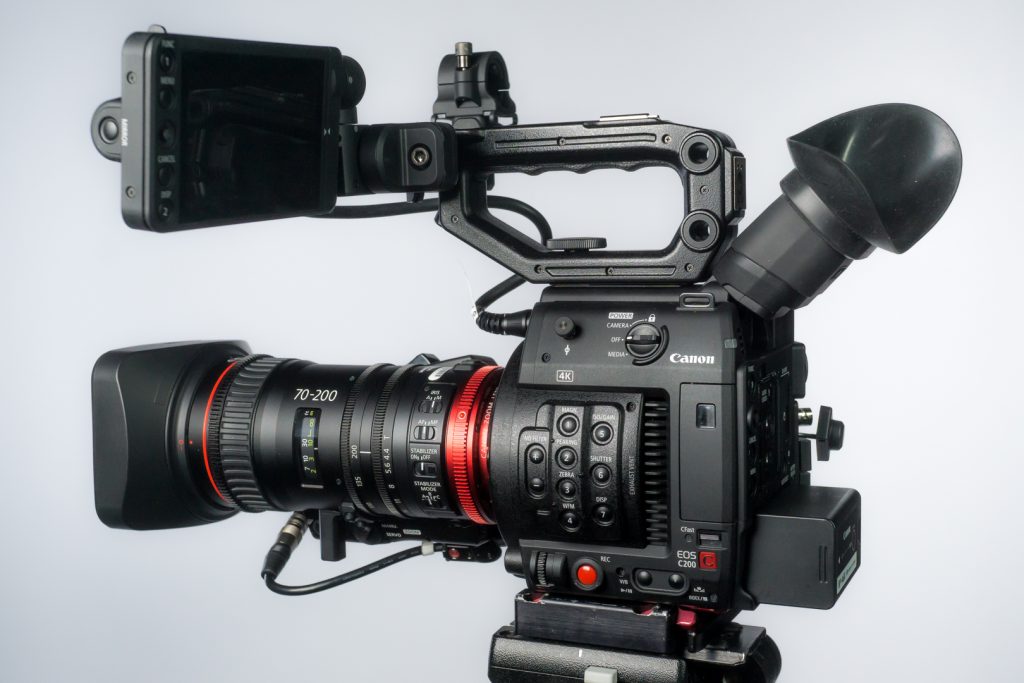 I’ve seen and touched the Canon C200 at trade shows but haven’t had the opportunity to actually use one until now. What better way to play than attaching the CN-E 70-200 T4.4 Compact Servo to one. The C200 sure does like the compact servo lenses. It attaches to the C200 EF mount securely and has electronic contacts so it talks to the camera as well as powers the zoom. This is a big plus because you get full control of the lens features plus lens info like distance and f-stop display in the EVF and LCD.

The lens does have a 12V DC connector available to power the lens when not using a mount with contacts for power. 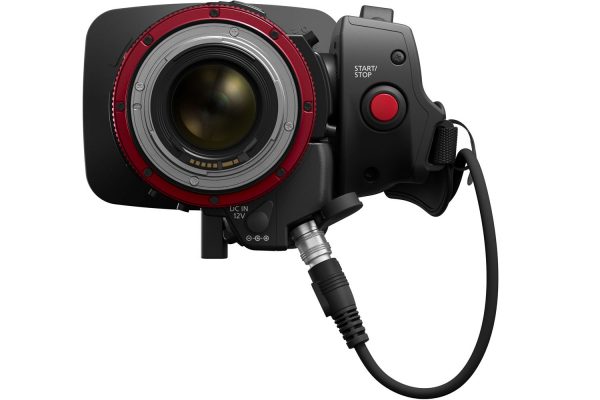 A must buy and frankly, should be included is the Zacuto Right Angle Extension Cable ($375) for the Zoom Rocker Grip. This angled 20 pin cable goes between the stock cable on the Zoom Grip and attaches to the 20 pin connector on the lens. 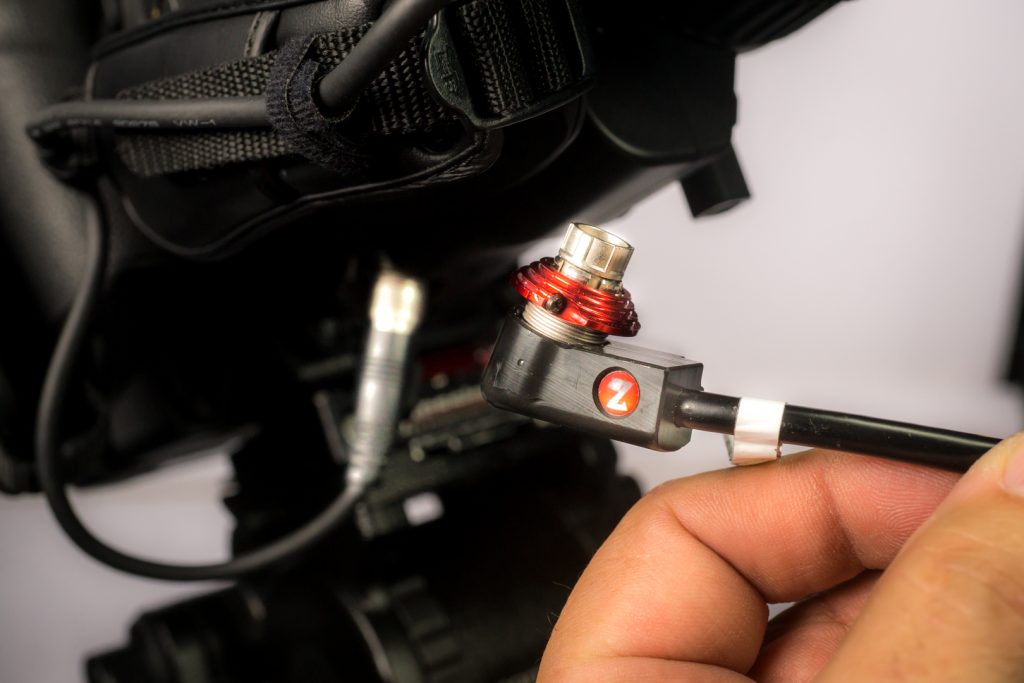 The issue is the stock cable connector is straight and quite long. This can cause the cable to get in the way when trying to place the camera on a flat surface, mount onto tripods or prevent the lens from rotating when 15mm LWS rods are used. All of these would require reconnecting the cable.

Once the CN-E 70-200 was mounted I didn’t want to take it off the C200. The only thing that I would want to swap it out for would be the CN-E 18-80mm model. What a great combo that would be. I do spend a lot of time with longer lenses as I like to compress the backgrounds when shooting talent. The 70-200mm is a great lens for this. 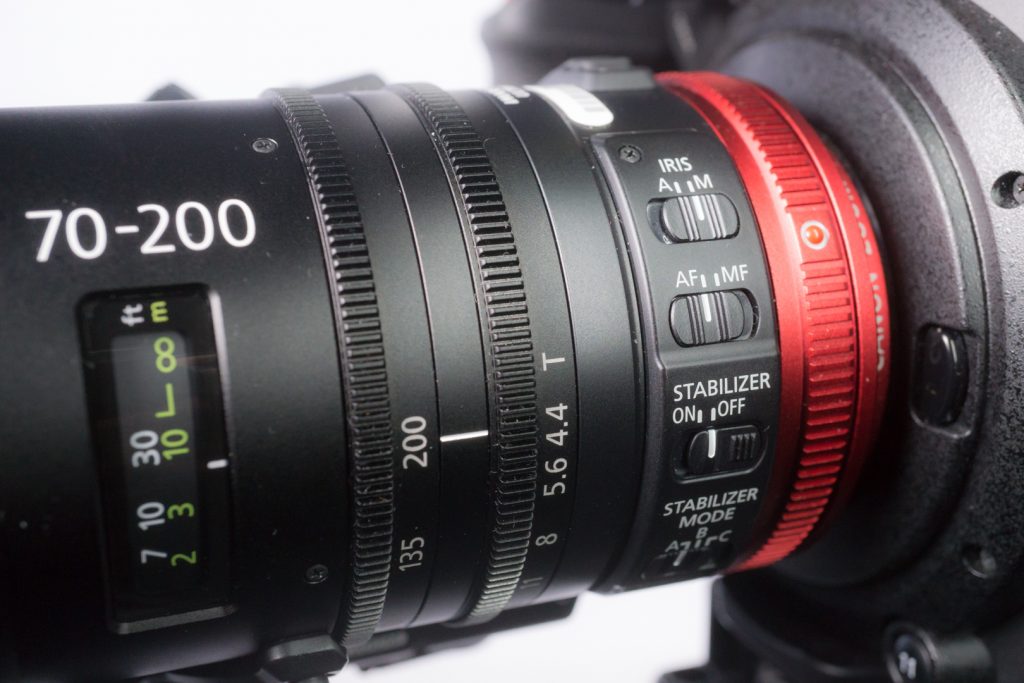 Here is where things get interesting. The compact servo lens has some features you see in the stills version such as Auto Iris, Autofocus as well as Image Stabilization with three modes. True to being a cine lens the iris, aperture, and focus are nicely dampened for smooth rotation and have 0.5mm gears. Unfortunately no focus distance markings on the lens itself but it does have a window similar to what you see on a stills lens for feet and metric markings. For video production, this isn’t ideal.

If you’ve ever used a Canon camera with DPAF (Dual Pixel Autofocus) then you know how powerful of a tool it is. The CN-E 70-200mm seems to take it to a new level. It tracks and focuses incredibly well. Clearly, Canon worked hard to make the lens shine when using autofocus with the Cinema EOS cameras.

Image stabilization on a cinema lens

Image stabilization is really good on this lens too. Shooting solid video with longer lenses can be tricky if you don’t have a big heavy tripod setup. The Image stabilization works very well on the CN-E 70-200. I was able to do some rack focusing at 200mm with IS on and it made me look better than I am. Thank you technology!

As mentioned, the lens has three options for setting image stabilization modes. 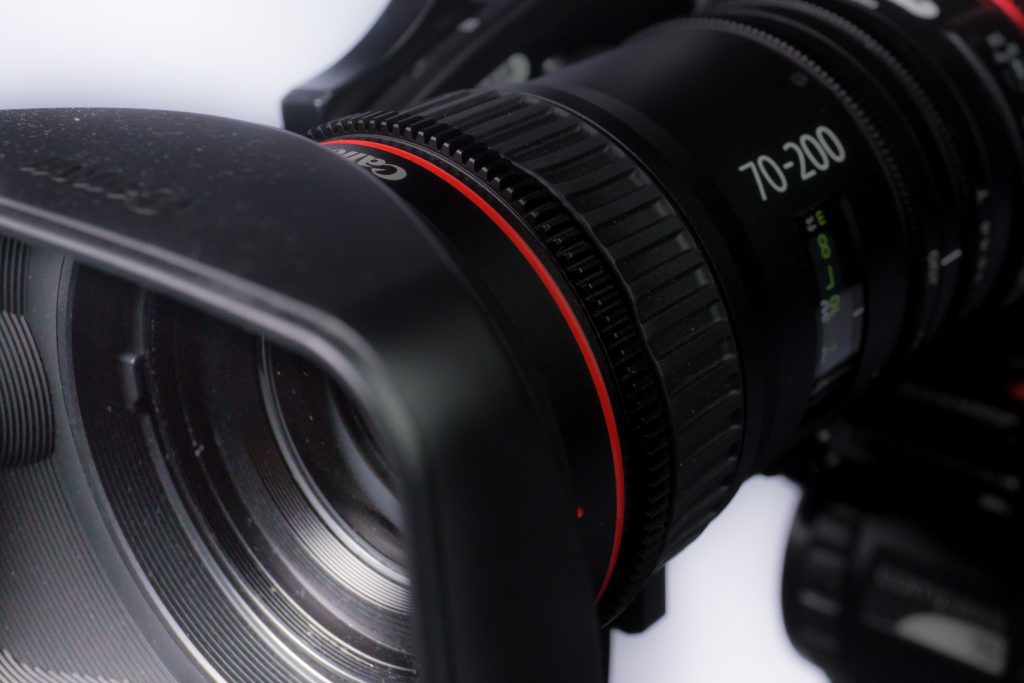 Keeping true to the name “Compact” the front of the lens takes a 77mm filter. This makes adding filters to the front an easy option. 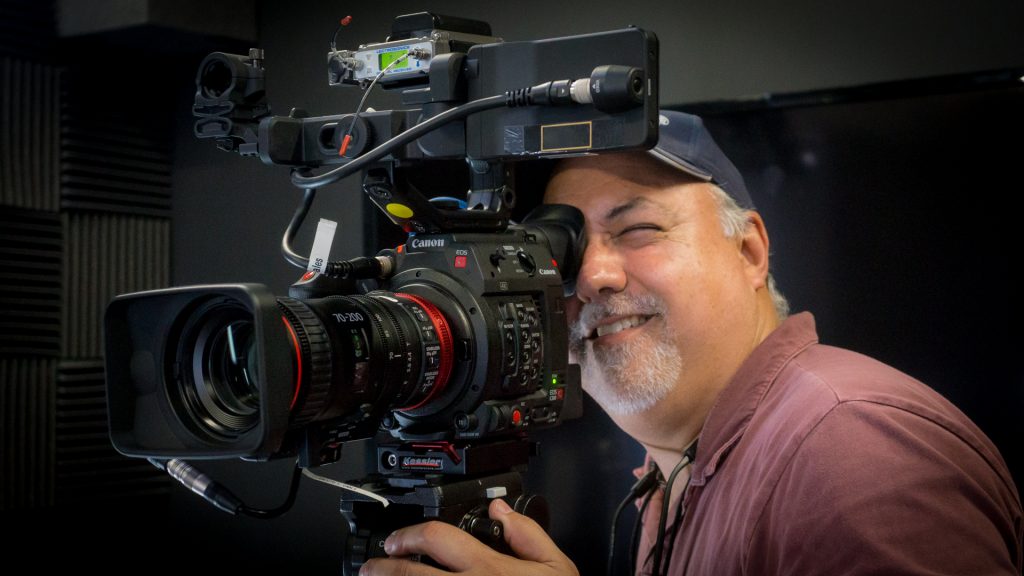 The Canon CN-E 70-200mm Compact Servo is a treat to shoot with. In the studio, it worked great set at T4.4. I generally shoot talent on camera for promos at f/4 to keep them in focus so the lens having a max aperture of T4.4 wasn’t an issue for me. It’s also nice to be able to get farther away too and zoom in to soften and compress the background.

Chasing moments at the beach was easy with the nice dampened feel of the focus ring and the long zoom range. I also appreciated the lens being light. Carrying the C200 with a zoom lens and a tripod on the ocean cliffs of San Diego was easy. I tried the 3 different IS settings and found them to be very good. I especially like the tripod setting to avoid image shift while panning. 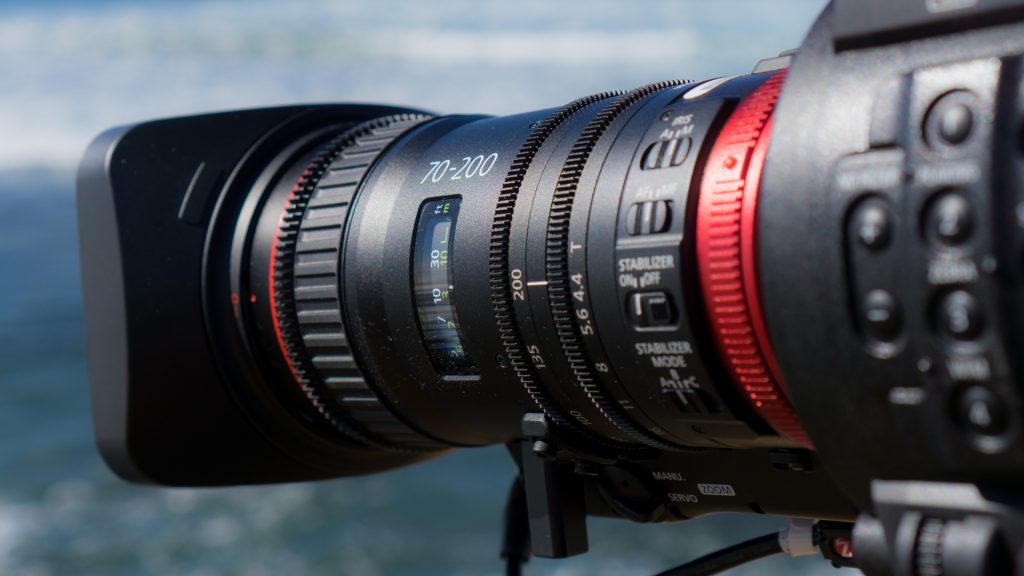 DPAF is one of Canon’s best features on the Cinema EOS cameras. The CN-E 70-200mm performs extremely well.  Some might take issue with the lack of distance/focus markings on the lens but personally, I can live without them. In my experience shooting at the beach, the lens performed great in the bright sun. The included lens hood stopped a lot of potential flaring.

If you are using or have the Canon CN-E primes, the 70–200mm T4.4 EF lens shares the same color science with them making adding one to your kit a great option. Overall the image doesn’t disappoint in this L class compact zoom.

It’s great to see so many true cinema lens options become more available in the past year. Prices are coming down and that makes adding one or two into your kit very tempting.

For a limited time, when purchasing either the CN-E 18-80 or 70-200 servo zooms, Canon is offering a free ZSG-C10 Zoom Servo Grip. This offer is only available for purchases made in the United States.

Well… That’s it for the Canon CN-E 70-200mm, but In part 2 of this article, I’ll cover shooting with the C200 in Raw light and grading the Canon Raw Light files.

Would you add a true parfocal cinema zoom lens to your kit? Let’s talk in the comments section below.