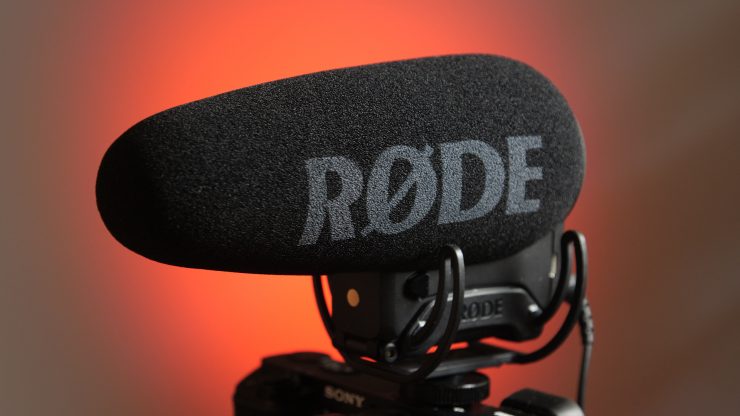 RØDE VideoMic Pro+ is the companies latest on-camera microphone. If you have a hybrid camera or a dedicated video camera you’re going to want to get much better-recorded audio than the built-in microphone can offer. That’s where adding a shotgun mic on top of your camera comes in. Traditionally these microphones aren’t that good for capturing all your audio. They’ll be a big improvement over the built-in option for reference audio or non-commercial projects, but they won’t replace a lav mic or a boomed-in mic for dialogue. However, if you’re a vlogger and hold a camera at arm’s length (selfie style) you’re right in the sweet spot for this style of mic. Many on-camera mics (such as the RØDE VideoMic range) can also be mounted on a boompole or stand and (using the correct extension lead) mounted much closer to your subject, giving pretty good results.

My weapon of choice has been the RØDE VideoMic Pro for years, which is arguably the industry standard. Personally, I’ve owned practically every version of this mic and with every release, RØDE has improved it. But is this new and potentially ultimate evolution, the VideoMic Pro+, worth upgrading to? Let’s take a closer look.

(Editor’s note – While RØDE is an advertiser, sponsor and long-term supporter of Newsshooter.com, our editorial is always independent of these relationships and all products are given an honest and fair evaluation.)


This isn’t really new to the VideoMic Pro+ but, it’s well worth mentioning. The Rycote Lyre suspension was introduced on the last upgrade and it fixed a big issue with the rubber band suspension system, which tended to fall off or break and made the microphone really bouncy.

One thing I will say is RØDE supports their products like no other company I’ve dealt with. On my older mic they replaced the rubber bands on the occasions that I lost or broke them, without question. Very excellent customer service and that goes a long way with me.

All this is now fixed with the Rycote Lyre suspension system of course. It keeps the handling noise from the camera to a minimum and it’s very firm, so if it bends it won’t break. No parts to replace – it just works and works very well. Score a big +1 for this! However if there is ever an issue the new VideoMic Pro+ RØDE offers a whopping 10-year extended warranty for free when you register your microphone with them. 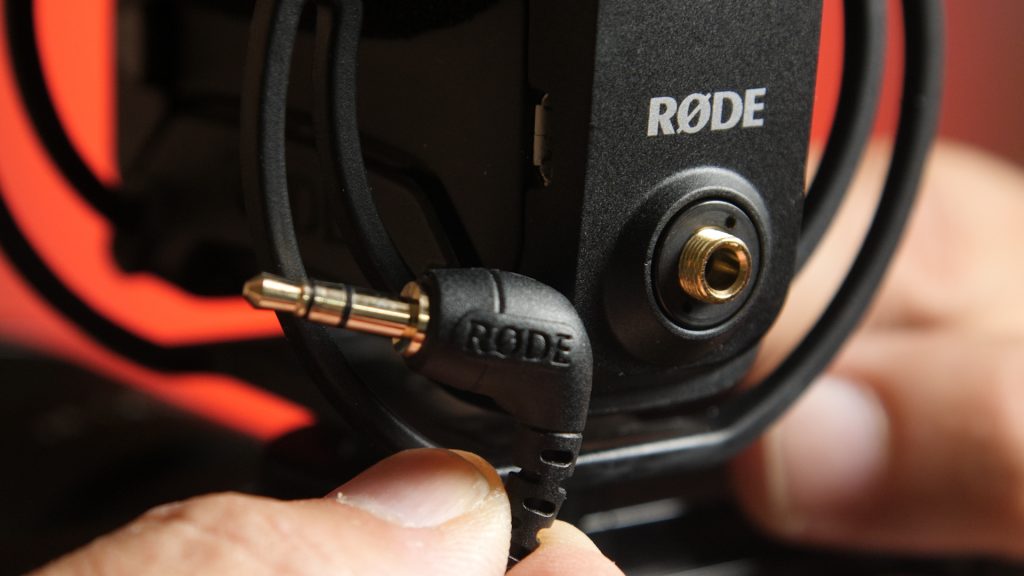 The cable is now removable (and has a thread lock!). If you need a longer run for a boom pole just pick up a longer cable. No adapter needed. Have a professional camera you want to use? Just add the VXLR Minijack to XLR adapter. 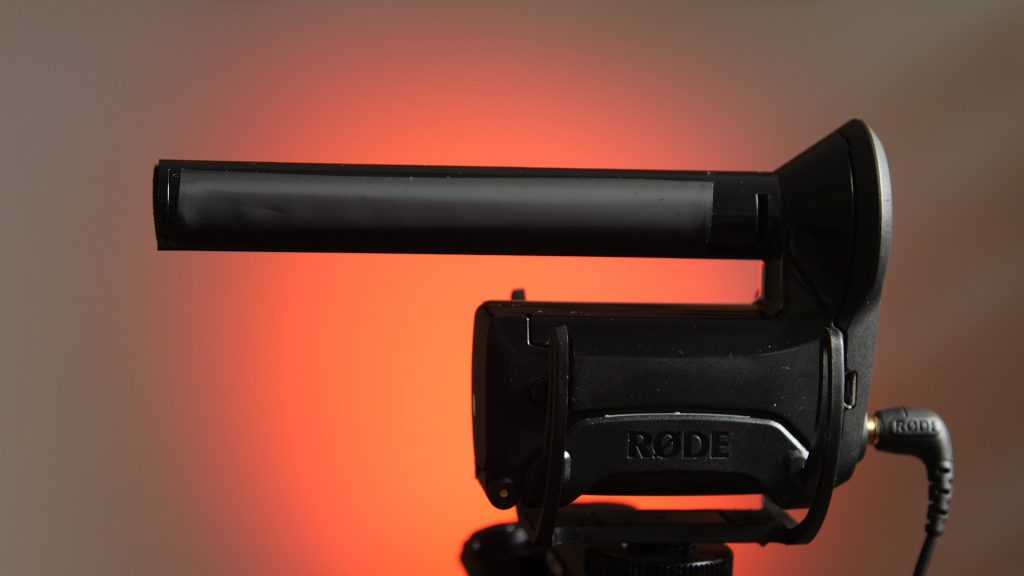 The Røde VideoMic Pro+ capsule/line tube and windshield are improved. Now the windshield has a rubber base that seals out the wind from creeping in from the back and also secures to the base, making the foam windscreen fit nice and tight. Unfortunately, if you have a dead cat from the original it won’t fit on this new model as the windscreen itself is larger.

Ah heck, I left the power on!

This is my favorite upgrade. I, like many of you, always forgot to turn my VideoMic Pro off when I was done shooting. Only to find out later when I picked up the camera that the battery was dead. Oh, I so hate it when that happens!! Well, The good news is this is no longer a problem now. The plus has an “Automatic Power Function” as long as your camera supplies ‘plug in power’ via the 3.5mm jack. The microphone will automatically turn off when unplugged from the camera, or when the camera’s power is turned off. If you leave it on the mic will also power up automatically when you power on the camera. This is so great. Especially for those run and gun situations. Never go without natural sound again. NICE! 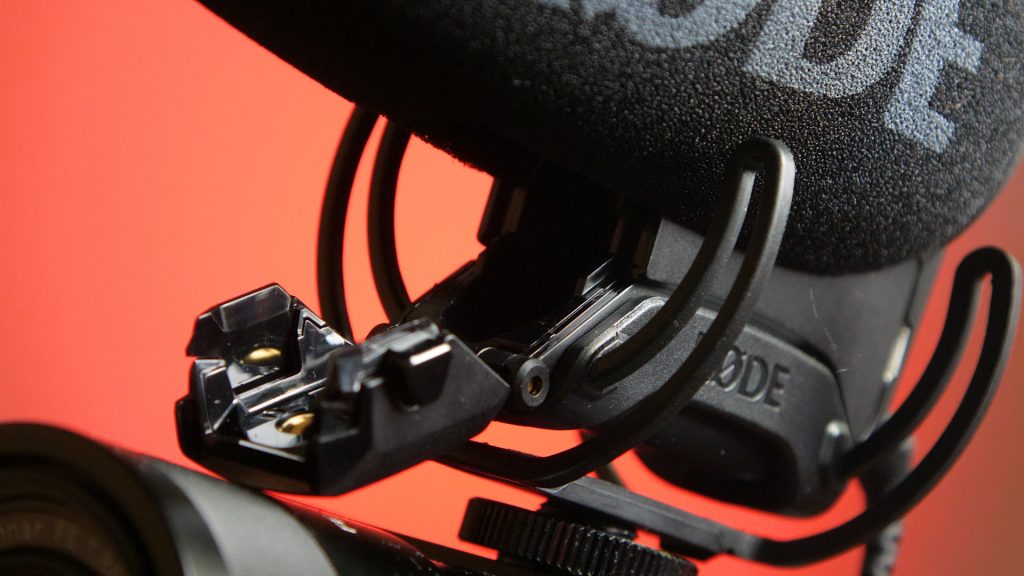 Here’s another upgrade that fixes an issue with the original – the new “Built-in Battery Door” makes replacing the battery much easier now and the door doesn’t come off, so you won’t lose it. Again. A huge improvement over the former model.

To power the VideoMic Pro+ you have a few options, but the headline is that RØDE has done away with the rectangular 9V battery which was the only option for previous models. 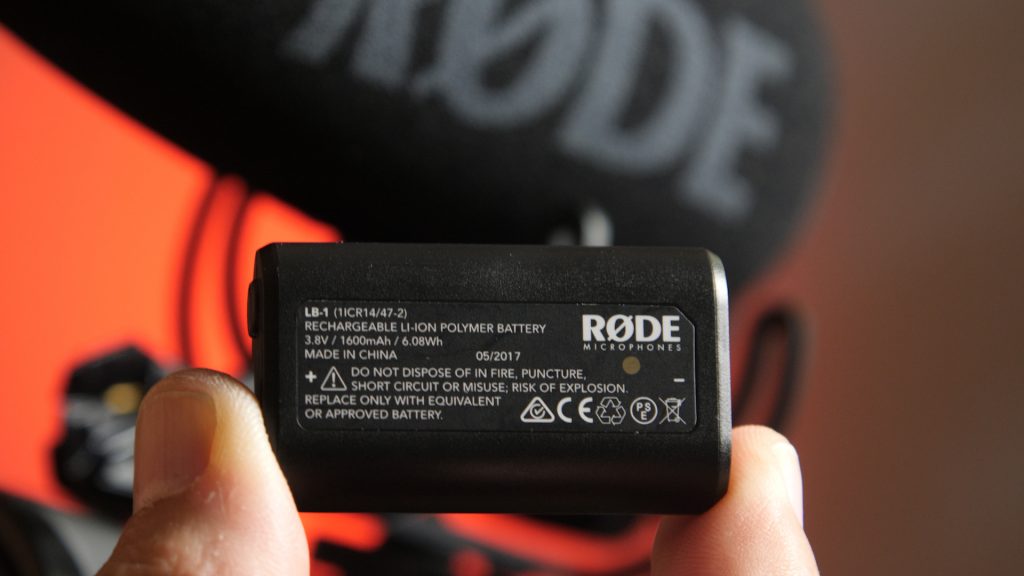 The VideoMic Pro+ includes RØDE’s new LB-1 Lithium-Ion Rechargeable Battery (which should be noted is not included in the extended warranty – which is fair enough). RØDE claims the LB-1 battery gets about 100 hours of use. That’s a lot of nat sound! While we haven’t tested it we’ve found that their previous battery claims are usually quite modest, so I’d be comfortable relying on that figure.

To charge the LB-1 just plug in the supplied Micro USB cable to a USB AC adapter. In addition to charging, the mic’s Micro USB allows for continuous power via a USB power source which will most likely be a USB power bank or ‘brick’.

Finally you can remove the LB-1 battery and just install a pair of AAs. It’s nice that RØDE included a rechargeable battery plus the option for using off the shelf AAs if you find yourself stuck. 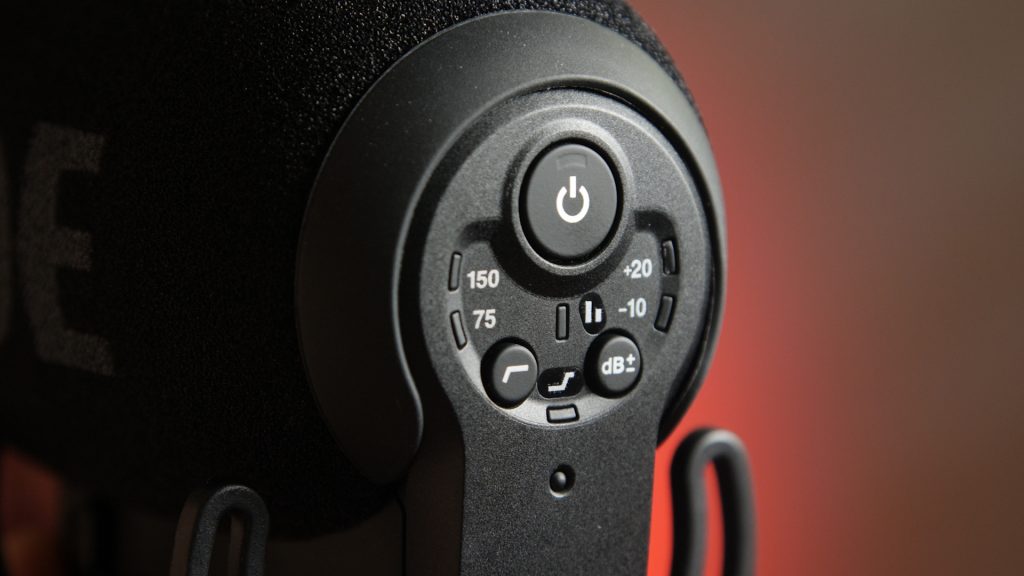 On the back of the VideoMic Pro+ is a “2-Stage High Pass Filter” to reduce low frequencies such as rumble from traffic or wind noise, and a “3-Stage Gain Control” with -10 and +20dB options. This will allow you to lower the camera record level to get cleaner audio since most DSLR and mirrorless cameras don’t have very good preamps. By pushing in both of these buttons you enable a “High-Frequency Boost” which is great for when you have a dead cat on the mic. Those tend to change the high-end a little so this setting will boost high frequencies, around the range of human voice so you’ll enhance intelligibility a little.

These options have been available on some of RØDE’s VideoMic range before, but new to the VideoMic Pro+ is the “Safety Channel” feature. Since the mic is a mono shotgun, in normal operation it effectively outputs its signal over two channels – you get the exact same thing on the left and right which is what you want in most cases. But the new Safety Channel setting takes advantage of this ‘wasted space’. By pressing the ON/OFF and dB buttons simultaneously on the back of the mic this enables the Safety Channel and the mic drops the right channel by 10dB. This is a very handy feature that, while it will add a minute or two to your post-production workflow may save your audio if you’re shooting run & gun, where the audio could unexpectedly get significantly louder. We’ve all had that happen and this new feature is a godsend for those occasions.

How does it sound?

As you can see the VideoMic Pro+ has some nice improvements that make it a much better, more usable microphone. But how does it sound? Well, I did some testing and found overall the microphone performs a little better (certainly as good) as the previous model. The VideoMic Pro+ sounds a little warmer to me, but the idea of the VideoMic Pro+ isn’t about an enhancement in the quality of the microphone capsule but rather making it more versatile and giving you better results in a wider range of applications.

If you liked the VideoMic Pro then the “+” will make you happy. Overall I think it’s worth getting for the better battery and auto on/off features alone. The audio quality is a touch better too.

Are you looking to upgrade your on-camera mic? Let’s talk in the comments section below.