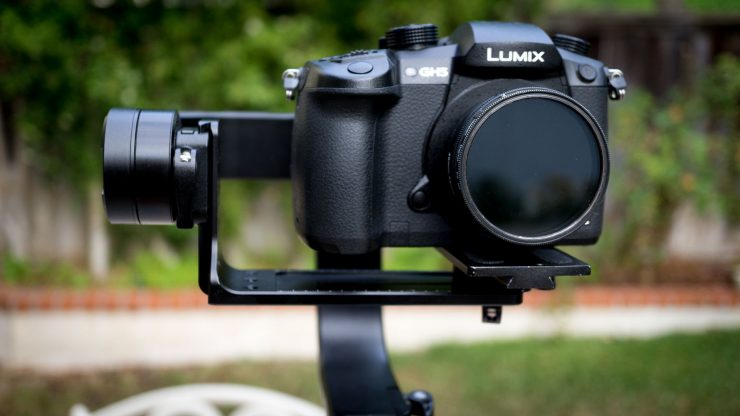 Back in 2015 Filmpower introduced the first single handheld three-axis gimbal, the Nebula 4000 Lite. Since then so many more have hit the market. I’ve used a few and for the most part they are all pretty good and I’ve got some really nice shots with them to help make my work more interesting, but the difficult part of using some of these is tuning them.

I don’t particularly like the PID software that a lot of these gimbals use. It’s a little on the nerdy side and while I like my nerd side I would rather have a more user friendly app that doesn’t require a computer. 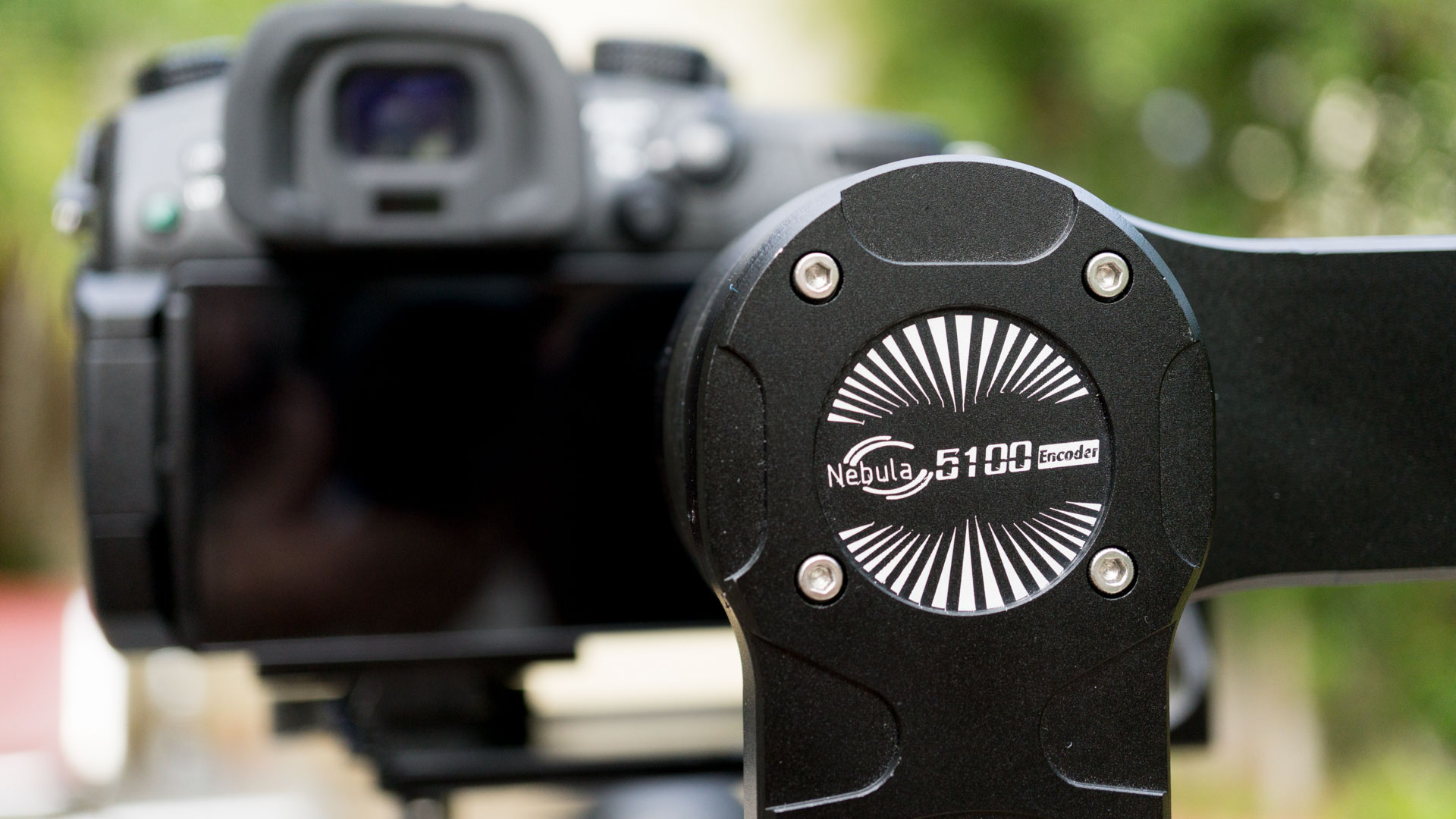 The good news is the Nebula 5100 has powerful motors which made fine-tuning unnecessary.

If you are the type of person that wants to use the PID software then you can, but for me it wasn’t necessary and I think most users would rather not.

Out of the box performance

Out of the box it was very easy to balance. Filmpower state that you don’t need to balance the Nebula 5100, but if you want to get the best performance I highly recommend balancing the camera before using it. It’s a simple four step process and worth learning since you will end up doing this on other gimbals as well. 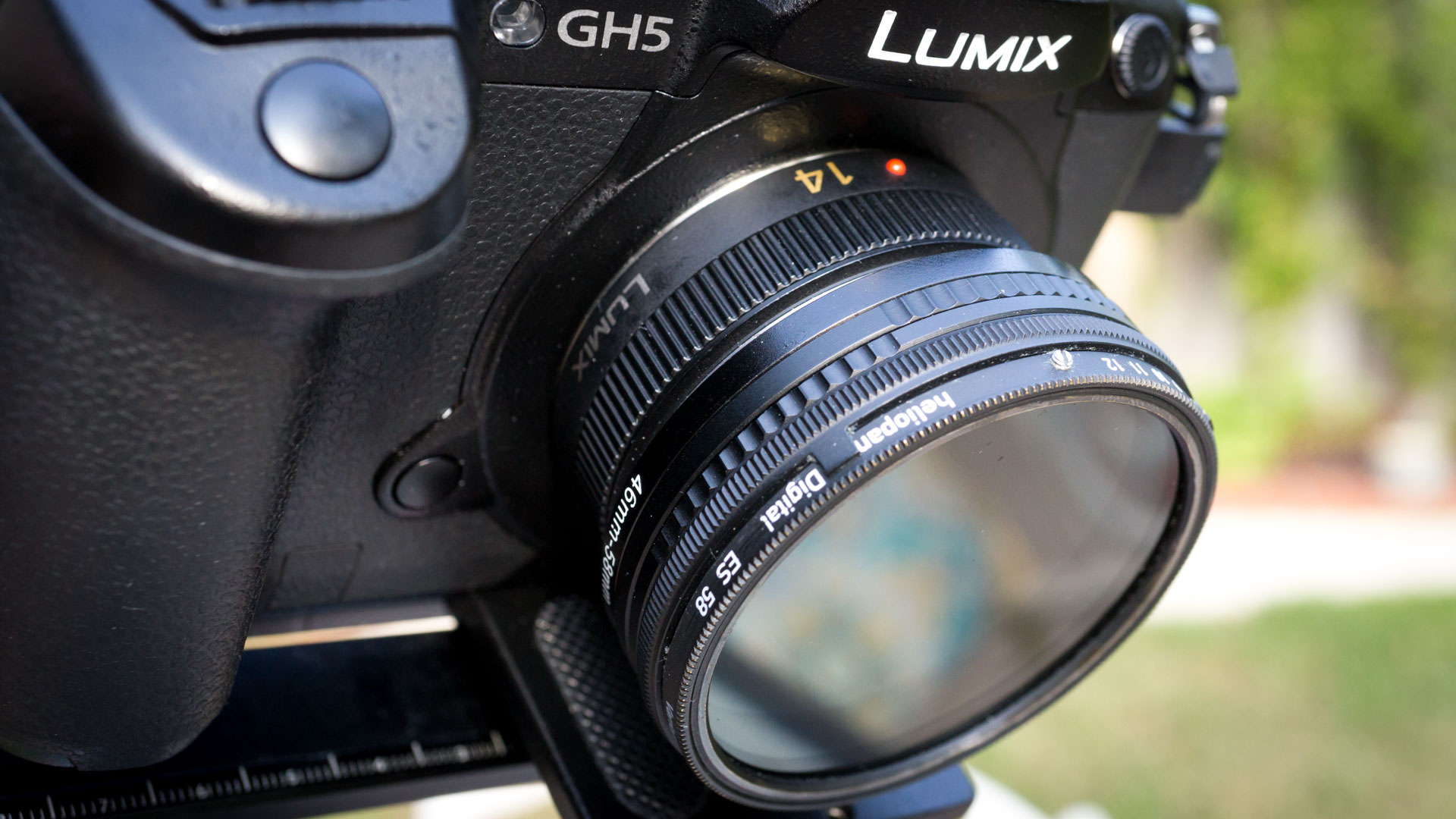 My primary camera is the GH5. I like to use short wide lenses on these gimbals because balancing them is easier if the lens is short, and a pancake lens is perfect for that. Paired with a variable ND it’s a solid setup. No fumbling with ND filters. I use the Lumix 14mm. It’s not super wide but wide enough for my type of shooting. With longer lenses it’s tougher to balance because clearance becomes an issue. You can only go so far back before the camera gets too close to the rear of the gimbal.

The Nebula 5100 can handle heavier loads though: a payload of up to 2.5kg or 5.5lb. That’s a big load for a single handed gimbal. You will need to do some curls for a couple weeks before you try to shoot with that payload plus the Nebula 5100 isn’t that light. The gimbal comes in at 3lbs 1oz or 1.4 kg. Add the camera and it starts to get heavy.

You can see the screen!

The trouble with a lot of one handed gimbal designs is that your screen on your camera gets obscured and this makes it hard to see what you are shooting. Filmpower have designed a version of the Nebula 5100 called the Slant with this in mind. 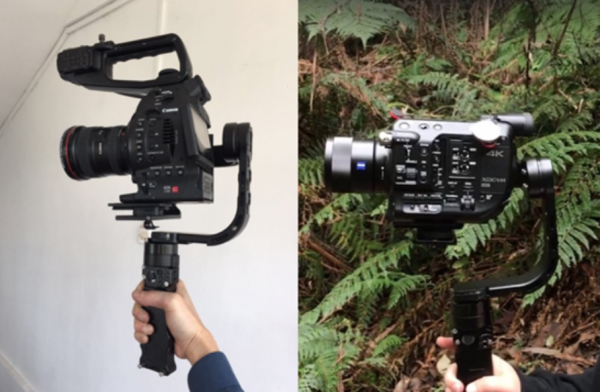 If you want to use the 5100 with bigger cameras such as the Canon C100, Canon 1dx Mark II, or Sony FS5, Filmpower have a riser rail available. When using any larger camera on a one handed gimbal, you will be limited to what type of lens you can run. It is impressive though, that for an additional $40, you can get this plate and run larger cameras like a C100 or FS5 on a one handed gimbal.

We weren’t supplied with the riser rail so it’s hard to know just how well it would work with a larger camera set up. 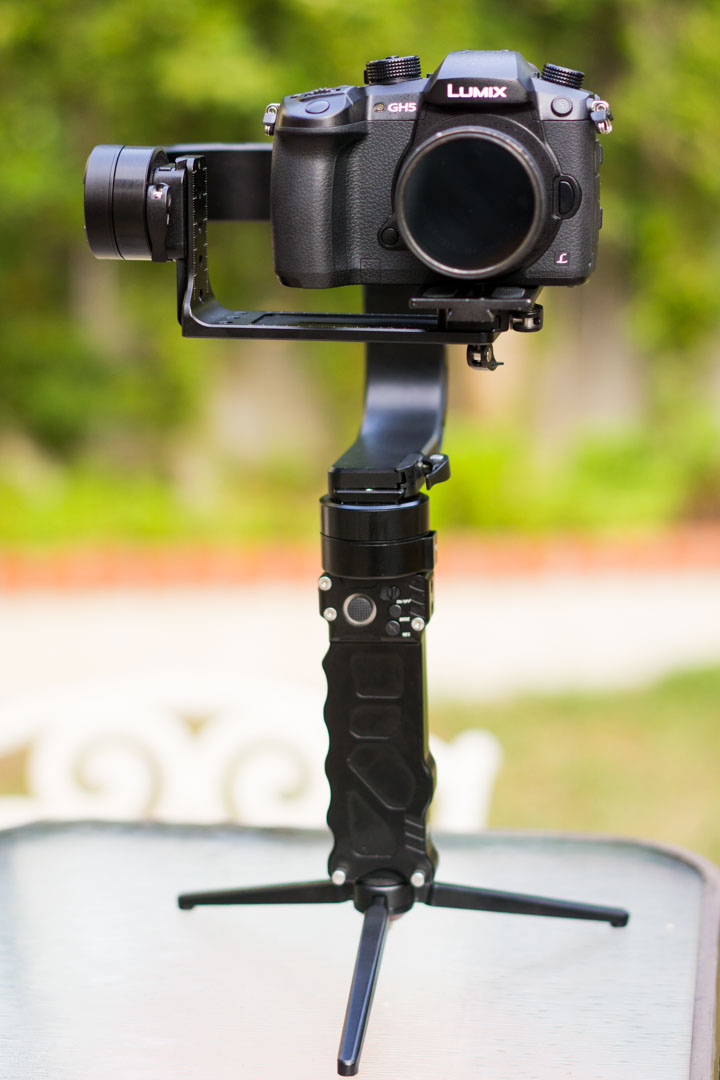 Mounting a camera to a single handed gimbal can be clumsy. Filmpower added a mini tripod that mounts on the bottom of the 1/4 20″ tap. This  is handy. With the Nebula 5100 on the mini tripod you can easily mount your camera and do a quick balance.

All the controls are on the left side of the grip. You have a pan and tilt button that works great when you want to frame up a shot and then do a move or get the perfect angle on talent while walking. I wouldn’t use it while recording because it doesn’t have a nice and smooth stop motion and looks very mechanical. 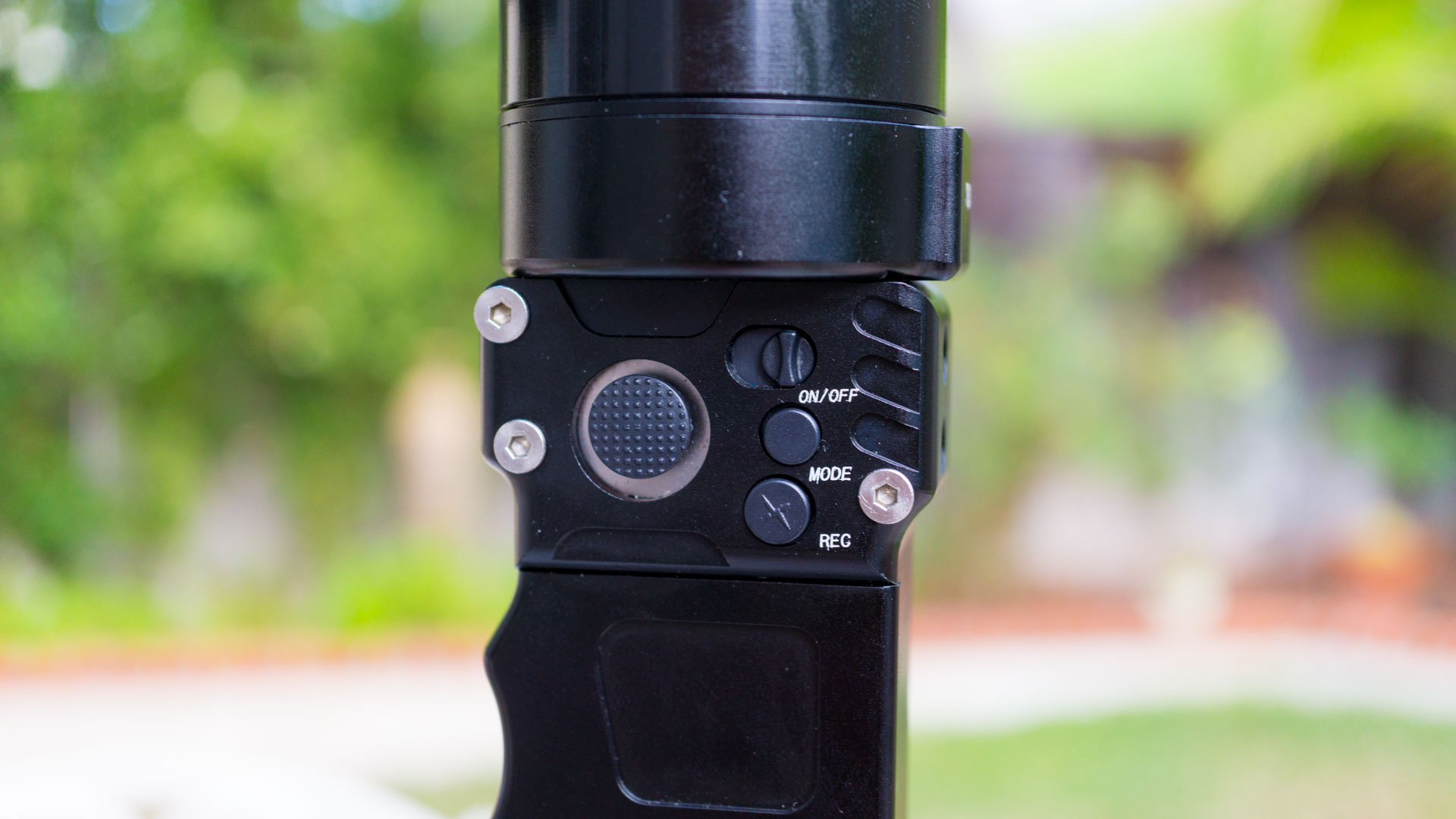 The mode button is under the ON/OFF switch. Like other gimbals you have several modes you can engage by pushing the button multiple times. 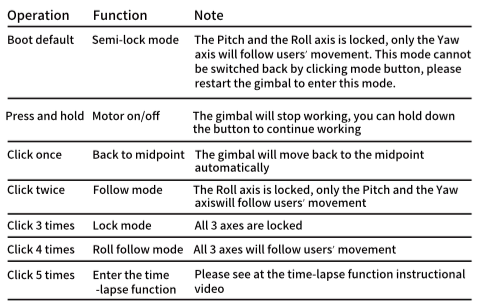 The click sequence feature works as it should. I tend to shoot with either pitch locked or axis locked. You really need to practice the move you want to make and decide what works best, but it’s nice to have the controls to choose from.

Going from inverted to underslung is also very easy. This is a big deal. Just turn the handle and you’re shooting low. If the balance is off push the button once and it goes back to midpoint.

If you are shooting with a Canon DSLR you can trigger record with the infrared remote that’s built into the gimbal’s handle.

How well does the $859 US Nebula 5100 perform? It works well. The key to using most gimbals is technique. It takes some practice to walk smoothly without bouncing. That’s one of the toughest issues to overcome and it’s not only in the single handed gimbals either. To fight this issue I like to add handlebars to the single. Yes it makes it bigger but having two hands on the gimbal makes it so much easier to control and get smooth shots.

In this sample I was still getting used to using the Nebula 5100. I found it to be relatively smooth but I had to walk really smooth. Sometimes I would get micro jitters or bumps if I didn’t. In underslung mode the gimbal performs really well. Very few bumps occurred. Filmpower state that you don’t need to balance the Nebula 5100 but I find it performed better when I did.


The roll follow mode allows you to get some pretty interesting shots. The roll axis follows your movement and as you slant the gimbal to one side the camera will roll with that movement.


The 5100 has a built-in time-lapse function that allows you to set a start and end point and then the gimbal will automatically track between the two positions over the course of how long you set your time-lapse for. 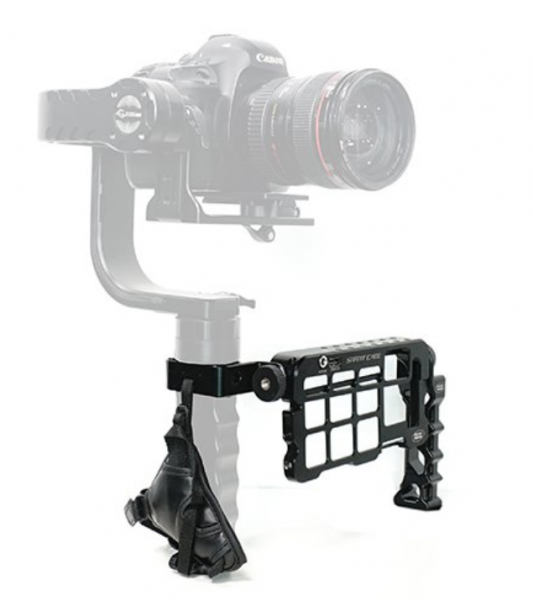 Filmpower has a new $99 US add-on called the Nebula 5100 Tactical Expansion Pack Mobile Version that works similar to a handlebar. It has a smartphone cage attached to use as a monitor. Since most cameras have WiFi or Bluetooth connectivity to mobile phones this is easy way to see what you’re shooting. The cage also has a USB charging port that can be used to keep your mobile phone charged up while shooting. You plug in your phone to the USB port and the cage power port to the Nebula 5100. It draws power directly from the gimbal. With all that I found the add on to be a mess and not very good. Mounting it is clumsy and strapping it on is as well. I would go with a set of handlebars and mount for a monitor or smartphone.

A few issues I found

For the most part the gimbal performs very well, however I found the weight to be a little more than I like. Yes I could be in better shape but holding a heavy object in front of your body for long periods of time is something I just don’t do very often. I got fatigued fairly quick. Using both hands with a handlebar really helps. 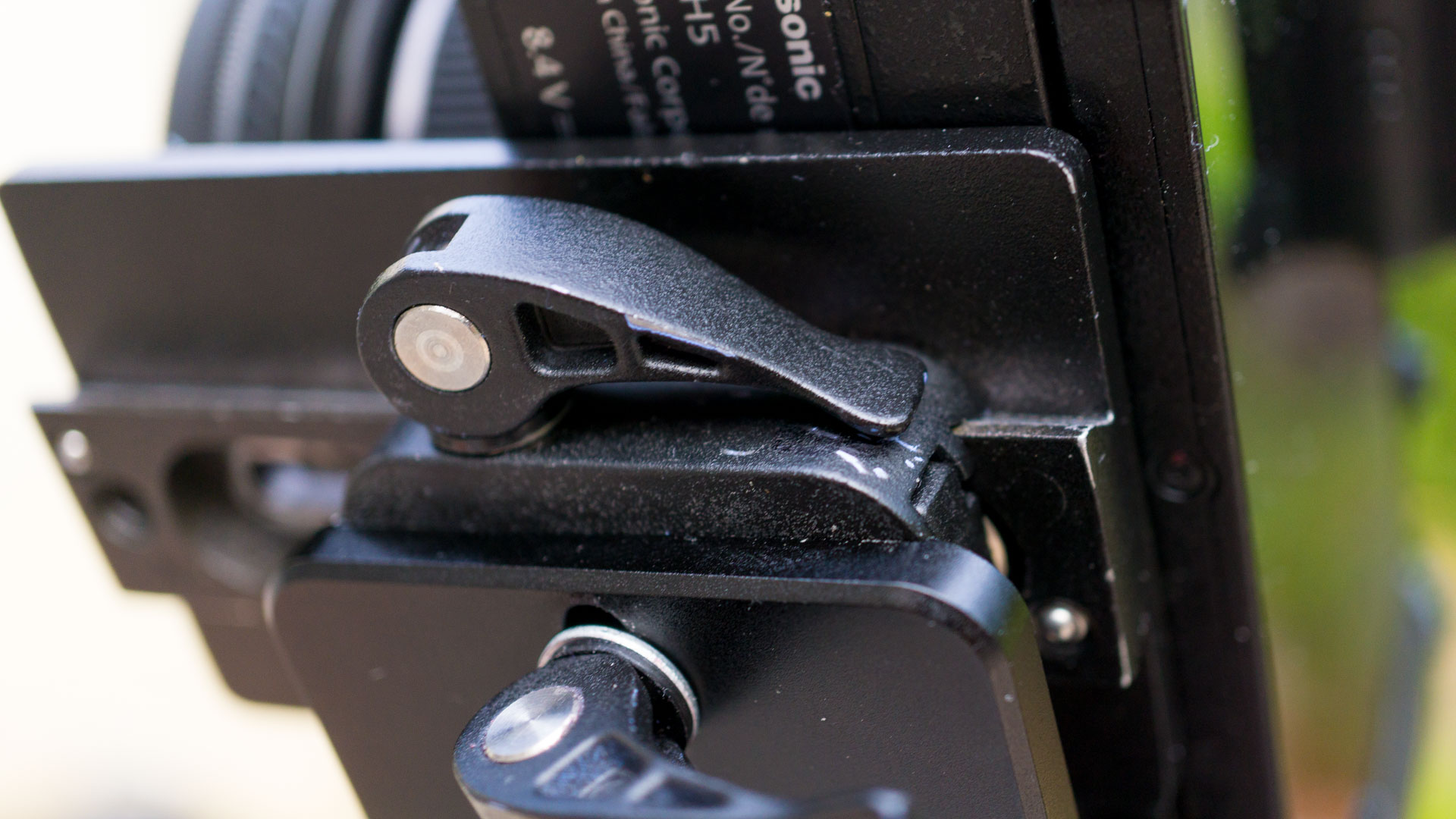 The lock down clamps are not as good as I would like. Especially the ones on the sled. For the camera plate I had to use a key to get it unlocked because the tip is angled inward and it’s hard to get my finger in between to pull it away.

Another issue with the quick release is the overall design. I dislike the non-standard quick release systems. I use the Arca-Swiss plates for my camera and tripod. The Nebula 5100 has its own design that’s not compatible with any other system so you have to swap out your camera plates if you decide to do use the gimbal. This is a common problem with most gimbals. 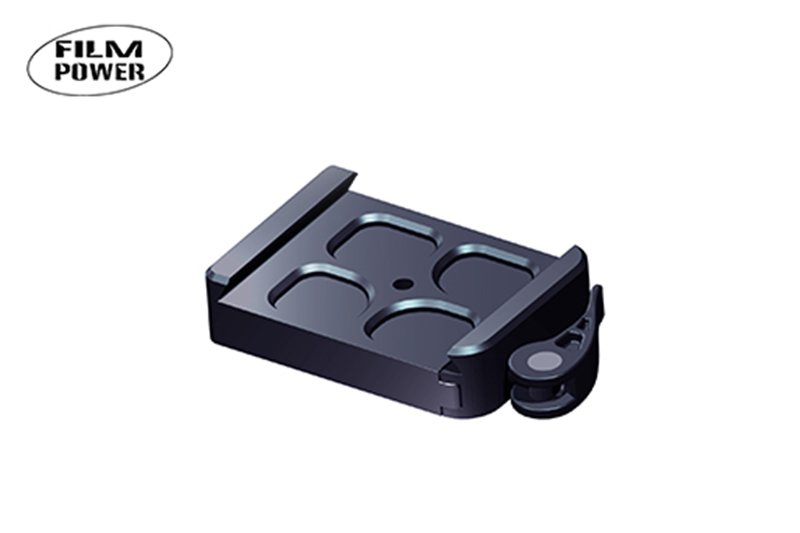 Filmpower does have a $40 Manfrotto plate that will make many happy.

Handheld gimbals are all the rage right now and it seems a new iteration comes out on a weekly basis. At $895 the Nebula 5100 is on the more expensive side compared to other offerings but works pretty well once you learn how to use it and get your walking technique down.