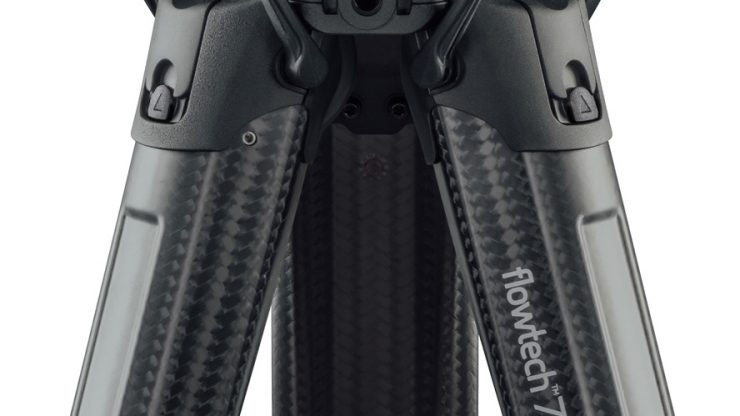 In an unassuming industrial building in sleepy Bury St Edmunds, there’s a tripod-making machine that’s so commercially sensitive I’m not allowed to take a picture of it.

Reels of carbon fibre tape snake through the warehouse space, all converging on a mighty set of contraptions whose purpose is to weave, shape, bake and trim components for the Flowtech 75. This is a new tripod from Sachtler and Vinten that’s a striking departure from the company’s existing range.

The phrase ‘game-changer’ has been used several times. It’s not yet lunchtime.

Alex Dummer used the Flowtech 75 with a Sony FS7 while filming the tripod’s ad campaign Flowtech is an important product for the Vitec group – the parent company of both Vinten and Sachtler – to get right. They’ve spent three years on R&D and they’re keen to emphasise that they started with a blank slate and expert engineers whose previous experience takes in Lotus and Bentley.

The new tripod looks very different to what’s gone before, a consequence of being able to think about what modern materials can do and how those capabilities should influence what a tripod actually looks like. Vitec say that they didn’t want change for change’s sake though and that any new product had to be demonstrably better than what was already available.

Matt actually had a look at an early prototype to give his feedback and his initial reaction was “wow, that is different.” He says comparing a Flowtech to a traditional tripod is a bit like the change involved from FCP 7 to FCP X – different in some ways, improved in some ways but perhaps not to everyone’s taste.

Unusually you’ll be able to buy both Vinten and Sachtler versions of the Flowtech 75. The only difference between them will be the colour of the brake handles. Vitec say that this is because the Flowtech has the strength of the traditionally studio-based Vinten products and the portability of the location-based Sachtler range.

The most striking thing about the new tripod legs is that they’re not a round section. Instead, to aid rigidity and make them easier to transport they’re more of a D-shape. “How hard can it be – one leg, three times,” deadpans one of the engineers who worked on the project.

The leg profile is complex though, and is the reason why the Flowtech is being produced in the UK: it’s one of the few places with enough expertise in carbon fibre manufacturing to keep both quality and yields up.

Flowtech: the highs and lows

The model that we’re shown is the Flowtech 75, a three-stage tripod with a cast aluminium 75mm bowl, capable of carrying a 20kg payload. The legs fold together with satisfying precision and lock out to three different angles. You can get down to 26 cm (10 inches) and up to 153 cm (60 inches) without the optional spreader, and up to 157cm (62 inches) with it attached.

Deploying the stages is a little different to a traditional tripod. Brake handles sit at the top of each leg, and when loosened you can raise and lower the height of the tripod. They’re intended for single-operator use so there are no controls at the bottom of the tripod: everything is where your hands would naturally fall while working a camera.

With a bit of practice apparently it’s possible to deploy a Flowtech tripod inside one second. When I had a go I was taking, well let’s just say a little longer than that, but if you were using one every day I suspect you’d get used to the brake system quickly. You’d also get used to the weight – or lack of it, a hair under 3kg for the legs.

It seems unlikely that such a slight-seeming support can really be up to the daily grind of news production, but Richard Satchell, Vitec’s MD, calls it “the most widely tested, robust product” they’ve launched. It’s been put through its paces from -40°C to 60°C and tested in water, salt water and swamps, both at the factory and on location.

If water gets into the nested legs the internal design is optimised to get rid of water via drainage holes. The whole tripod is screwed and clipped together to aid repairs in the field. The weave of the carbon fibre is also designed not to run if it suffers a tear or crack. Overall it seems that Flowtech has been designed to be used, and to keep going in less than ideal conditions.

It’s easy to overlook how important a decent tripod is – a good one just gets out of the way and does its job with a complete lack of drama. It doesn’t flash and there aren’t any firmware upgrades. But the Flowtech 75 appears to do the impossible: be lighter than the competition (including Sachtler’s own legs) while offering more stable support (265% stiffer than Sachtler’s Speedlock 75 legs).

Talking to the staff who have worked to develop the system you come away with the sense that they’re genuinely proud of what they’ve made. And while it’s easy to get carried away with hype the Flowtech 75 manages to be that rare beast: an exciting tripod. We’re looking forward to putting one through its paces when they start shipping.

When they reach retail later this year the Flowtech 75 will be priced at $1,050 US, £810 or €960. That’s around the same price as Sachtler’s existing Speedlock 75 CF legs. They’ll also be available as a kit in with various configurations of tripod head, from the Ace to the FSB8.

Are your legs due an upgrade? What about your tripod legs? Let us know your first impressions of the Flowtech 75 in the comments below.