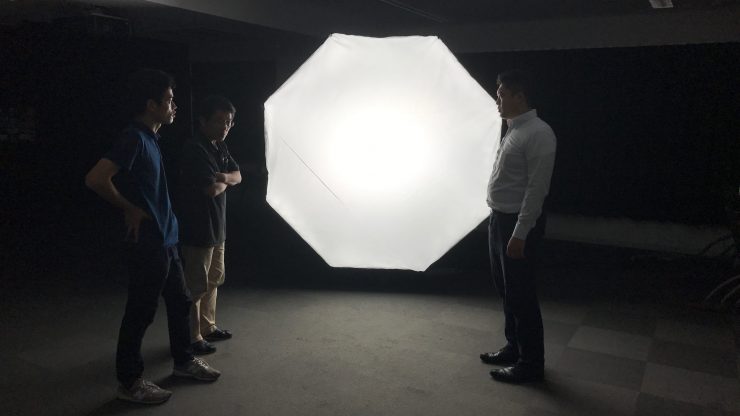 The DoP Choice OCTA range is a great way of creating a very large soft lighting source from a smaller fixture. The OCTA comes in sizes of 3′, 5′, and 7′. You can then pair this with a DoP Choice Rabbit Ears flexible mounting system and use a wide range of lights from companies such as Arri, BB&S, Cineo, Creamsource, Kino Flo, Litepanels, Lupo, and Rosco.

We have all used softboxes or punched lights through diffusion before to try and create softer sources, but the size of your light normally dictates how big you can make that source. To get a large soft lighting source you normally have to use very large fixtures with a very wide beam angle. Not everyone has access to these type of lights and they are generally heavy and power hungry. So what is your other option? 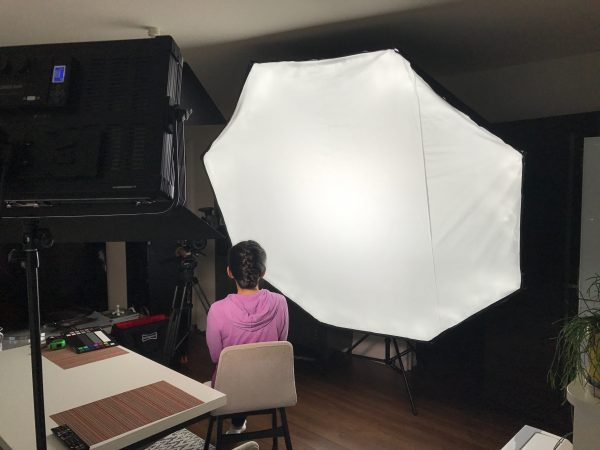 The DoP Choice OCTA series lets you take a much smaller light (and often one that can be run off camera batteries) and turn it into a very large soft source. Of course the light you use will determine how bright you can make that source, but it gives you the ability to create a large single source from a smaller fixture that you may already own.

To get the most benefit from the OCTA series you really do need to pair them with light fixtures that have a wide beam angle. If you try and use them with lights that have a narrow beam you will just end up illuminating only a small part of the softbox. 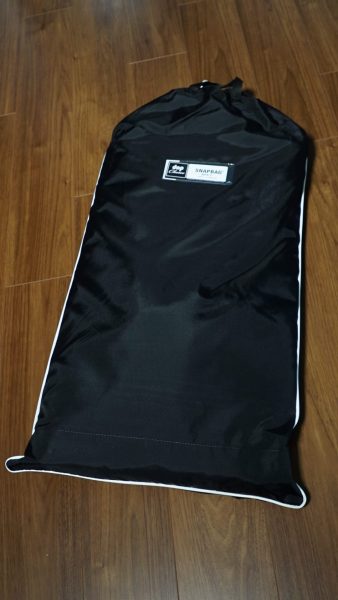 The OCTA series come in soft bags that are fairly easy to transport considering the physical size of the soft box. Inside you will find the OCTA as well as the diffuser and another smaller diffusion baffle. 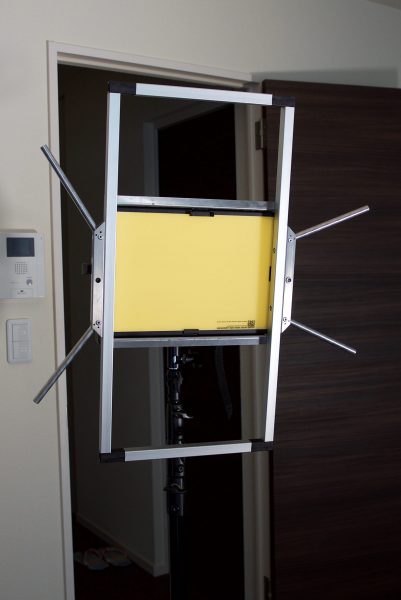 The OCTA series won’t work on their own and you need to pair them with one of DoP Choice’s Rabbit Ears. The Rabbit Ears come in various sizes and are basically an aluminium frame with built-in arms that fold out into a Y-shape, hence the name Rabbit Ears. 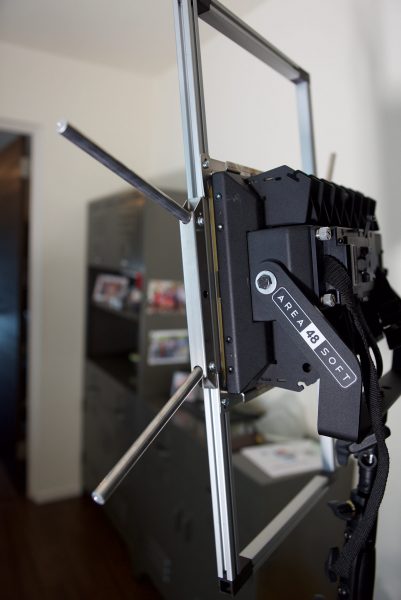 The installation process for inserting your light into the Rabbit Ears frame is fairly straightforward. In the case of using the BB&S Area 48, you line up the two moveable side strips and once you have the light locked down between them you tighten down the screws with a screwdriver.

Attaching the OCTA to the Rabbit Ears 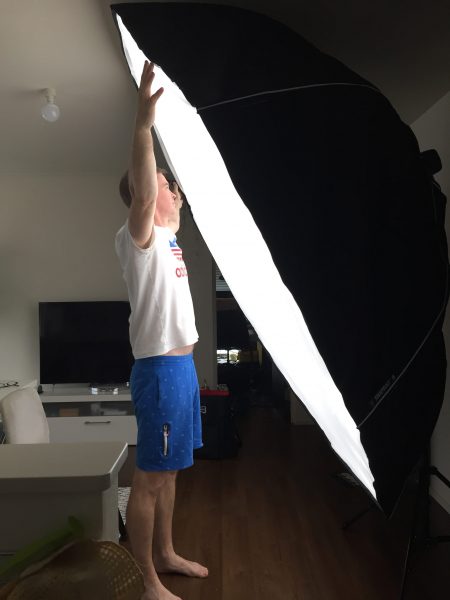 On the OCTA soft box there are eight flexible rods that, when inserted into the Rabbit Ears frame, create the rigid structure that holds your OCTA in place. Depending on what size OCTA you get you will probably be able to set it up yourself. From my experience you can set up the largest OCTA 7 by yourself, but it certainly helps if you have someone else there to assist you.

Once you have done this you attach the diffuser to the velcro around the outside of the OCTA.

That’s not a softbox, this is a softbox! 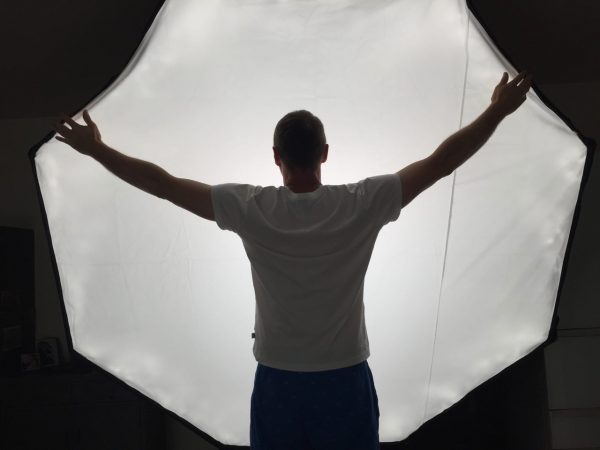 As I mentioned earlier the OCTA come in sizes of 3′, 5′ and 7′. The 3′ version is certainly better for use in smaller spaces or places where the ceiling isn’t very high. The OCTA 5 and 7 are gigantic and you really do need to use them in places where you have reasonably high ceilings and plenty of space to position them. 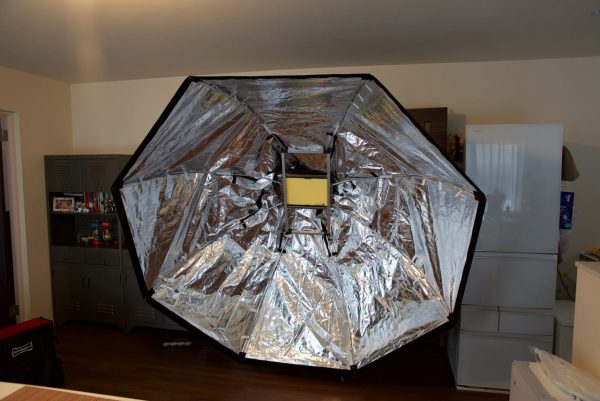 You may well think a large soft box is just be a one trick pony, but surprisingly it can be used for a lot of different applications. You can use it as a key interview light, for lighting up large spaces, as a space light over a table, or even for lighting up green screens.

So how does the light look? 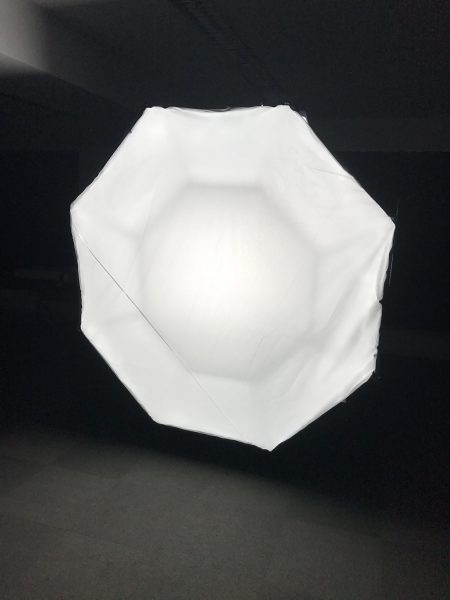 I have used both a BB&S Area 48 and an Arri SC-60 in the rectangular Rabbit Ears with both the OCTA 5 and OCTA 7. The Arri Skypanel series, particularly the SC-60, works really well. The SC-60 has a wide beam spread, a good amount of output, and a nice linear fall off. All these qualities make it the perfect light to use in combination with the larger OCTA 5 or OCTA 7.

The SC-60 and the larger OCTA versions create a beautiful, large soft source where you don’t get shadows unless you are right up close to a wall. It’s also produces a very flattering light for interview situations.

A single BB&S Area 48, that outputs 3290lx at a distance of one metre has a very wide 160° beam spread which also makes it perfect to use with the OCTA series.

It’s amazing just how much light you can get out of the BB&S using a OCTA 5 or 7. This combination produces a beautiful soft lighting source which is perfect for a lot of shooting scenarios where you don’t need a ton of output.

If you want a more powerful soft source you can run two BB&S Area 48s or something like the Arri SC-60 Sky Panel. 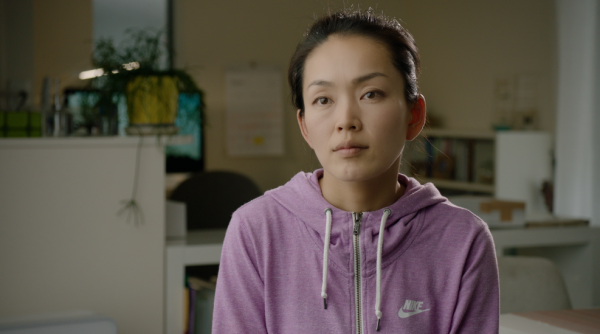 The light falls off beautifully to the sides and just as a test I measured how much output I was getting from the BB&S Area 48 at a distance of 1m from the centre of the OCTA – halfway across, and at the very edge. In the centre I got a reading of 1230lx, halfway across it was 1010 and at the very edge it was 634lx. These readings just reiterated what I could already see with my own eyes- that the OCTA’s light fall off is very linear and even. Of course this also has a lot to do with what light you are using. 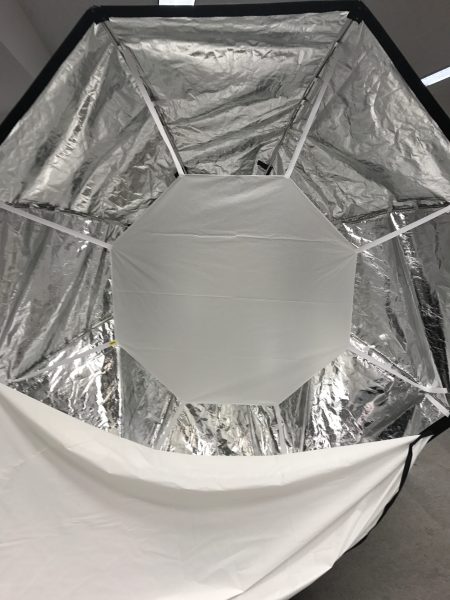 The fall off when using a Arri SC-60 was just as impressive given its output is about 4x that of the BB&S Area 48. With just one Arri SC-60 I could light up quite a big room and create a beautiful even soft source. 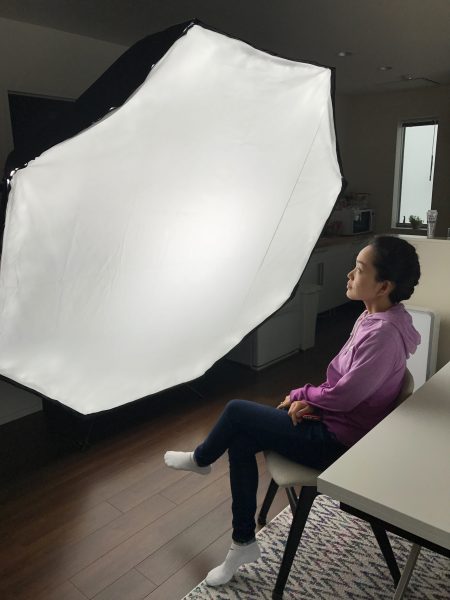 What you do need to take into account when using a OCTA is just how much space they physically take up. You really can’t use them in confined spaces and you need a fairly large area to set them up. If you try to use them in a room that doesn’t have a particularly high ceiling you may find the OCTA literally goes from the floor to the ceiling.

If you plan on using them for interviews you really need to be aware of where you need to position the light. If you put it too square on to your talent you will find you don’t enough enough room to place the person who is asking the questions let alone your camera!

The other problem is because they physically take up quite a lot of space they aren’t very suitable for travelling with. The large rectangular Rabbit Ears will fit in a suitcase, but probably not most other bags. 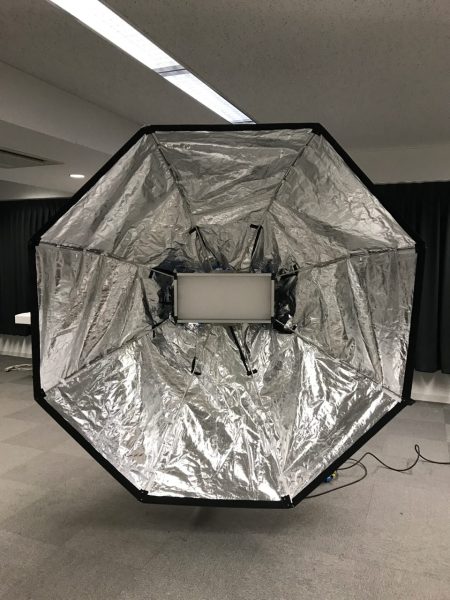 I have been using the DoP Choice OCTA range for over a year now. Lighting modifiers are not something you can review over a few days, you really need to spend time using them on real world jobs to judge their strengths and weaknesses.

The Octa range certainly aren’t cheap and you really need to look at it as a long term investment. The Octa 7 for instance retails for $1,750.00 ex gst in Australia (around $1390US). To use a Octa you also need to buy the Rabbit Ears which are $529.00AU ex gst ($420US). The thing with soft boxes like the Octa series is you can continue to use them for years, even when different lights come and go.

I’m a big fan of the DoP Choice OCTA softboxes. For someone who often works alone or in small crews it’s great to be able to create a large soft source from much smaller light sources than say a HMI. Sometimes big isn’t always better, but with the OCTA series, it definitely is.