And so we reach the end of Matt Porwoll’s series for AbelCine looking at documentary zooms, with Behind the Lens episode nine. This episode looks at one of the least expensive lenses on test (well, it’s all relative) – the Canon Compact Servo 18-80 T4.4. It’s a relatively recent release and is the product of Canon marrying expertise from their stills and cinema divisions. But do you get the best of both worlds? Or even something more?

From the stills side you get AF, auto iris and Image Stabilisation, and from the cine side the lens is parfocal, interfaces with FIZ gears and has smooth iris control. Sadly there are no hard focus stops, making repeated focus pulls tricky for a solo operator. The iris and zoom gears are also Canon standard 0.5 pitch rather than the more commonly used 0.8 pitch, as seen on the focus ring. 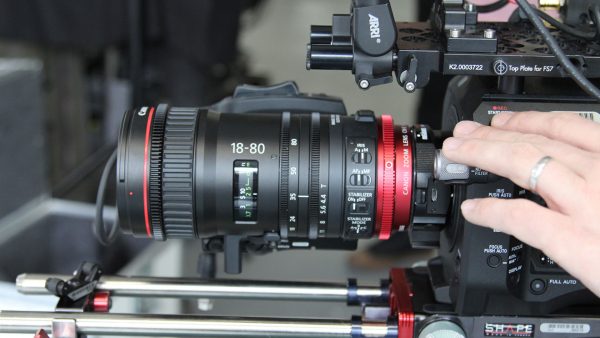 You could say that there’s a third area of influence here as well – ENG zooms. To that end there’s an optional servo unit that offers record start/stop, push auto iris and zoom control. It attaches to the lens via a standard Arri rosette, which is doubly handy as it means you can mount it anywhere you have a matching connector on your camera or rig. It’s nice to see Canon embracing industry standards like this, and they’ve done the same on the handgrip of the new C200 camera. Now about those control rings…

One downside to the 18-80’s servo grip though is that the control cable connecting the servo unit to the lens stands proud. Zacuto have spotted this and offer a right angle extension that solves the problem. What’s another $475 US between friends, right?

A tortoise, not a hare

This is a relatively slow lens. While T4.4 (or f/4) is still perfectly useable in daylight or controlled situations, Matt feels like you’d need another lens in your bag for low-light shooting. Having said that, the T-stop is maintained throughout the zoom range (which can hardly be said to be the case with my Canon 24-105 f/4 lens which offers a comparable zoom range), and it’s sharp all the way from 18mm to 80mm.

Matt found colours from the lens to be neutral with a slight warmth to skin tones – more or less what you’d expect from Canon. Although perhaps more similar to the much more expensive Canon Compact Zooms also on test than you might think.

Chromatic aberration is well controlled and there’s not a great deal of focus breathing. At 35mm there’s a little, but it’s gone by the time you get to 50mm.

Bokeh is better than you might expect from a nine-bladed aperture (a lot of the other lenses on test feature 11 blades).

Close focus is 1.7ft, which equates to about a foot away from the front element of the lens. It’s very flare resistant and weighs only 2.65lbs (1.2kg).

Behind the Lens episode nine: Conclusions 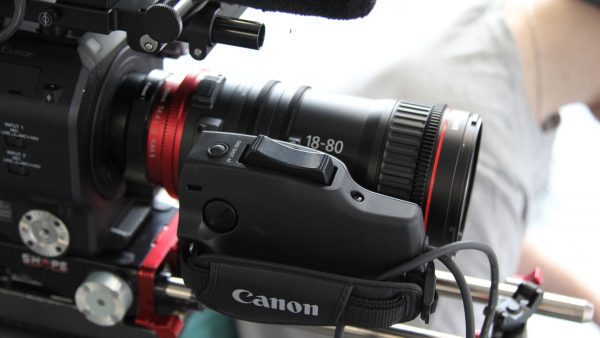 Overall then Matt found the Canon 18-80 to be a decent all-rounder: “a great, inexpensive lens that will be a happy upgrade from your DSLR zooms.” If you can live with the T4.4 maximum aperture, it should certainly be on your list if you’re looking for a documentary zoom.

And it’s goodbye from him

As ever (and for the last time, sniff) there’s loads more information on the AbelCine blog – and you can catch up with all the other episodes in the series here on Newsshooter. It’s been our pleasure to partner with AbelCine to bring you the series and we’d love to know what you’ve made of it. And if you could commission another, what would you like to see covered? Talk to us in the comments below.