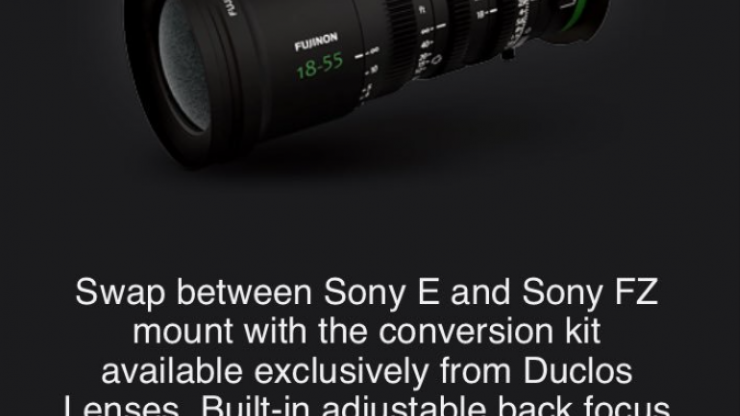 I previously reviewed the Fujinon MK zooms and found them to be great lenses, but they only come in Sony E or Fujinon X mounts. Duclos Lenses did try making a Canon EF mount kit for the MK zooms but the idea was ultimately scrapped. When I spoke to Matt Duclos he told me, “In our efforts to adapt the Fujinon MK line to Canon EF mount, we overcame several hurdles, but simply couldn’t fit the optics into a new housing economically. In order to accommodate a Canon EF mount, we would have had to redesign and manufacture about 20-30% of the lens itself which would have put the final product into a much higher price bracket than we were comfortable with.”

When I asked Matt about why it was possible to make this mount in Sony FZ he said, “The Sony FZ Mount was our next best option given the popularity of Sony’s professional cinema cameras equipped with it. The FZ Mount is a much shallower, wider flange than Canon EF which simply makes it more accepting to non-native lenses. We would have had to reduce the housing by a whopping 26mm in order to make the Canon mount work. In contrast, the Sony FZ Mount only requires an adjustment of 1 millimeter, which made it an even more ideal choice for Fujinon’s MK line.”

Your factory warranty is fully maintained with the conversion kit if you purchase the zooms from Duclos Lenses. The Sony FZ mount kit for Fujinon’s new MK zooms retails for $500US, but you can get it for $400US if you purchase it along with a new Fujinon MK zoom lens from Duclos Lenses. The mount kit is now available to pre-order and it will start shipping in August.

Do you own a Sony F3, F5 or F55? Would you now consider buying the Fujinon MK zooms? Let us know in the comments section below.