Filmpower have updated their Nebula 5100 three-axis gimbal with a new camera arm, and the result is the Nebula 5100 Slant. As the name suggests the Slant’s arm is angled at 45° to the camera, which increases the gimbal’s payload – it can now cope with a whopping 3.2kg – and also improves visibility for the screen on the back of your camera.

The Nebula 5100 Slant weighs 900g and features encoded motors, 8-10 hours of battery life, 360° of rotation on each axis and that 3.2kg payload capacity. That’s going to be a lot to carry in one hand, so there are also expansion kits that add a crossbar and handle to allow you to use two hands to carry the rig and mount a monitor or smartphone to see what you’re shooting more easily.

Filmpower also have a couple of new microphones going by the name Vono. The Vono lite weighs 170g, and features a metal body and built-in shock absorber. It mounts via a coldshoe attachment and records a stereo signal into the camera via a 3.5mm jack.

There’s also a more expensive model, called the Vono shotgun pro, which connects via XLR and looks much more like a traditional shotgun microphone: it will be very interesting to see how this compares in performance to industry workhorses like the Sennheiser 416.

Also new from Filmpower is the Nebula Focus  wireless gimbal follow focus pack. This is a follow focus unit specifically designed with the solo gimbal shooter in mind (a lonely profession if ever there was one). It’s a two-in-one receiver and motor that can connect to your rig via your camera’s hotshoe mount or 15mm rods. This leaves plenty of clearance to mount your camera plus follow focus to a one-handed gimbal… like, for instance the Nebula 5100 Slant.

The Nebula Focus is controlled by small remote, which also features a screen with a distance readout provided by ultrasonic sensors on the front of the main unit. The motor is said to be ‘silent’ and battery life ‘long,’ though we haven’t tried one out to see just what that means in practice. Filmpower have also suggested that the Nebula Focus ‘may’ get updated to allow the unit to supply autofocus functions ‘in the future.’ Even without this though it looks like an impressive bit of kit, and something that wouldn’t have been possible (at least affordably for solo shooters) even just a couple of years ago. 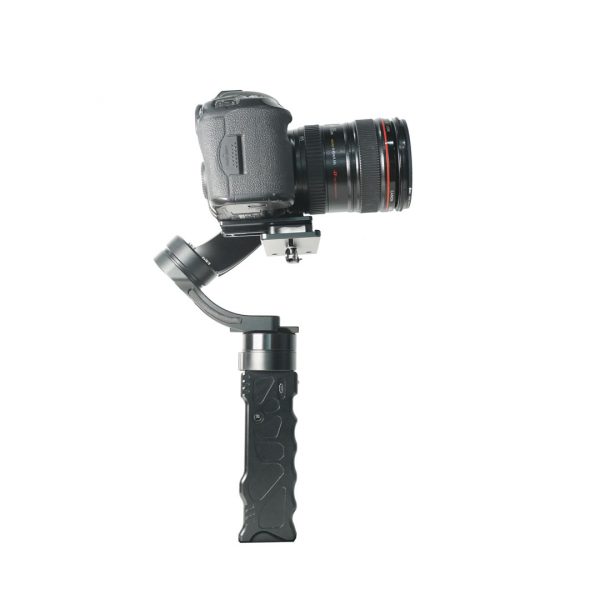 The Nebula 5100 Slant is available now and retails for $999 US, currently Filmpower are bundling a free Vono lite microphone with every order. The Vono lite on its own costs $60 US and the Vono shotgun pro $300 US. The Nebula Focus will be released next month for $650 US.

Are gimbals relevant for your style of shooting? Is one-handed enough hands to ensure stability for a 3.2kg payload? And how likely are you to use a one-person focused follow focus? Let us know in the comments below.