Boys for Sale is a feature documentary about urisen, mostly straight male sex workers in Tokyo’s Shinjuku 2-chome, an area with connections to the sex trade dating back to the 17th century. The film features candid interviews interspersed with animations developed specially for the documentary to give a voice to the stories of these young men’s lives in the Tokyo underground. 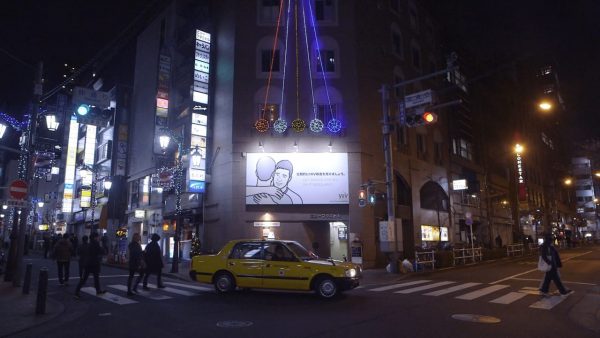 The idea for the film initially came about because the executive producer, Ian Thomas Ash and I were looking for a long-term project to do together. Ian had heard about these urisen bars and it seemed like no one else had covered the topic, so we decided to try to make the film.

Patience was the key in gaining trust

Initially we started going to the Shinjuku 2-chome area of Tokyo, effectively Tokyo’s gay quarter and supposedly the largest concentration of gay and lesbian bars anywhere in the world. We started researching not just the urisen but all of the issues affecting the community and trying to find people who would talk to us on camera.

For the first year I never even took a camera. Given the nature of the subject, and Japanese society’s attitude to homosexuality, a lot of people were understandably reluctant to talk to us. At this stage possible locations and subjects were photographed only with a phone. Slowly over the course of almost weekly visits for a year we made contacts and gained the trust of many individuals who were to be invaluable in making the film, even if they do not appear in it, some just by vouching for us to the community.

Production began initially with interviews with an NGO working with the whole community on many issues including sexual health and general filming of the area. It was designed to get people used to seeing us there filming.

The production team consisted of just two of us, the executive producer as interviewer and myself. Whilst I was nominally the DoP I wore all of the technical production hats – camera, sound and lighting as well as co-producer for what turned into a year-long on-and-off shoot.

It was a challenge to fulfil all of the roles while still being able to physically carry everything, remain mobile and be able to put up and break down the gear quickly.

Keeping the gear light and portable

All of the main interviews in the film were shot on my Canon C100, mostly using the Canon 17-55 f/2.8 IS lens. This was just barely wide enough as a lot of the spaces we filmed in were very cramped. I also used a Canon 70-200 f/4 for some shots, particularly in the streets to get shots of bar signs. For most of the interviews the C100 was locked down on a Sachtler Ace tripod and I used a handheld or monopod mounted Canon 5DmkII with a Canon 24-70 f/2.8 as a B-cam.

Sound was recorded straight into the C100 with a RODElink wireless film maker kit lav mic, and backup sound from a RODE Videomic Pro mounted on the camera.

Lighting was a single Pergear MTL 900 which has a great form factor with a nice soft light, isn’t heavy, fits in my tripod bag (with the tripod and a light stand) and can run off external batteries. That and a reflector, sometimes augmented with a Yongnuo 300III LED light as a back or hair light served as my lighting kit. Despite seeming like an out of date camera now, the C100 is a fantastic ‘straight out of the bag’ camera with really good low light capabilities and excellent audio preamps making it a great choice for this kind of shooting. 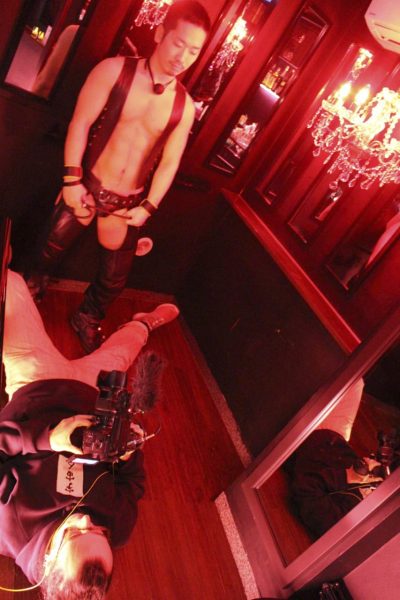 The interviews with many of the boys were filmed in a room barely bigger than a single bed in the “sex rooms” above one of the urisen bars and as they were on the clock and were paying for their time we had only an hour to set-up, do the interview, break down and get out without being seen by other customers. This was often a… ahem… challenge, but I had the set-up and break-down down to a fine art. We went in well prepared with the C100 fully built, wireless receiver and shotgun mic already mounted, so all I had to do was pull it out of the bag (a Thinktank Airport International with all the dividers taken out so the camera would fit) and stick it on the tripod.

The room where those interviews was filmed was also ridiculously hot with three people in there. It often reaches 35+°C during Tokyo in the summer  but we turned the air conditioning off due to the noise. Added to this, the walls were paper-thin, making recording sound quite challenging. Despite this, the Rode wireless setup performed flawlessly, aside from a little clothes rustling which was my fault due to the hasty set-up.

In one way the room was a gift as a DP due to the floor level mirror that stretched down the whole of one wall, that allowed me to film the subject and his reflection in the mirror – a useful visual metaphor for the duality of many of the topics discussed with the boys and their lives in general. 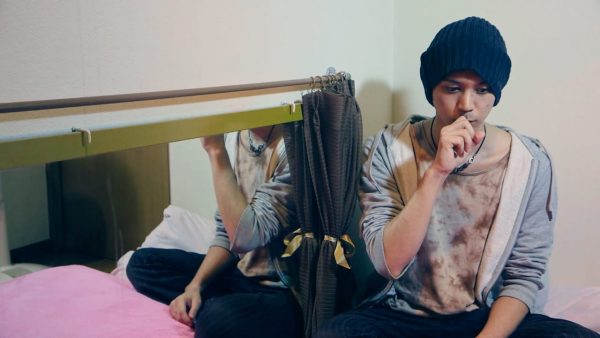 All of the interviewees were asked if they wanted their faces and/or voices disguised and those that chose to hide their identities were given a choice on how that would occur – by choosing from several masks we had brought with us, or in post by blurring out their faces and altering their voices. We were extremely careful to make sure that no-one outside of the immediate crew ever saw the raw footage. Protecting the boys was a very important consideration. 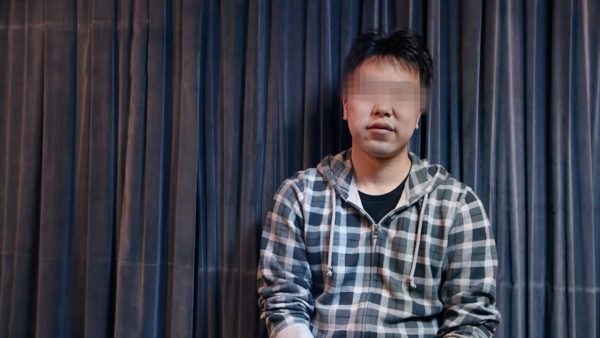 A conscious decision was made to not film anything salacious as we felt this would alienate many viewers and cheapen the film, but some of the stories the boys told still needed to be illustrated.
The illustrator N Tani Studio and animator Jeremy Yamamura did an amazing job of translating the stories into Japanese style animé that allows the stories to be told without the ethical or moral dilemmas that would be inherent in filming live action.
The music in the film composed by Kazaguruma also adds a distinctly Japanese feeling whilst remaining contemporary and helps bind the film together with a common musical theme.

Some of the interviews were very challenging emotionally because of the sometimes disturbing stories the boys told us and some of the issues surrounding sexual health and its education that were raised. The executive producer and I were often close to tears after an interview.

Boys for Sale: the festival circuit

It was a fascinating two years, one that I feel honoured to have participated in and I’m very proud of how the film turned out, especially now as it is starting to screen in festivals and people are finally getting a glimpse into this rarely talked-about side of Japan.

Lastly I’d like to thank everyone who participated in the film for trusting us and allowing us to film their stories. Boys for Sale had it’s sold-out world premiere at the Nippon Connection Film Festival, in Frankfurt on 24 May 2017.

Boys for Sale will also screen at LGBT Film Festival Outfest 2017 LA on Wednesday, 12 July at 5pm in the Director’s Guild Of America (Theater 2). For further screenings and more information about the film visit our website – www.boysforsale.com.