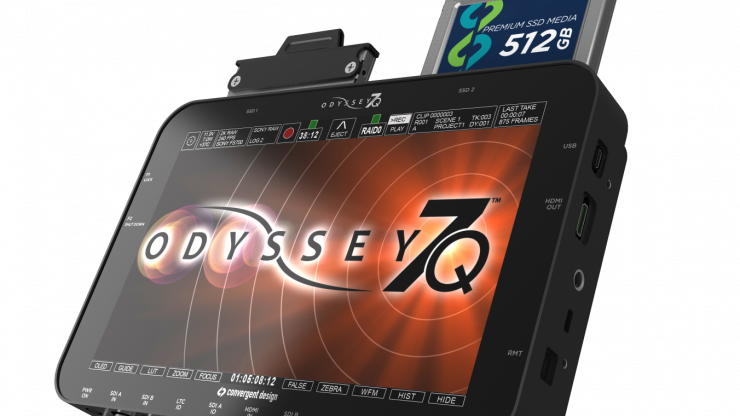 Convergent Design’s Odyssey7Q+ recorder/monitor has had a major price drop of $300US and will now retail for $1495US. As well as the price reduction all Odyssey7Q/7Q+ and Apollo owners will receive the company’s Titan HD Extract upgrade at no additional charge.

Titan HD Extract allows you to create multi-camera productions from a single 4K/UHD camera. Titan records three HD streams from a single 4K/UHD source (HDMI or SDI). Titan records one HD downscale of the entire 4K raster and two HD extracts based on user-defined movable windows (within the 4K image). This is a really clever feature and one that I constantly use on a lot of my shoots. Titan HD Extract was originally $795 US and it’s impressive to see Convergent Design now include this as a free feature for all new and existing Odyssey7Q/7Q+ and Apollo owners.

The Odyssey7Q+ has a OLED display, an impressive array of monitoring tools, 3D LUT support, and ProRes Proxy to ProRes 4444 recording. The Odyssey7Q+ can also be upgraded (at a cost) to support ARRIRAW, Canon RAW, Sony FS series RAW, POV RAW and Panasonic VariCam LT (and soon AU-EVA1) RAW. The dual SSD architecture enables RAW recording and playback of 2Kp240 and 4Kp60. RAW to ProRes recording is also supported for a variety of different cameras.

The Odyssey Apollo Option (a paid upgrade) enables quad-channel HD / dual-channel 4Kp30 recording and playback. The Apollo Option can save you time in post-production by recording all streams to a common codec, with the same timecode and consistent file naming and starting frame. Apollo also features AV Align, that can correct audio/video sync issues commonly found in multi-camera productions that use a mixture of different cameras.

It is great to see Convergent Design lower the cost of the Odyssey 7Q+ to a point where it is more competitively priced against it’s main competition, the $1295US Atomos Shogun Inferno. I would personally have preferred to have seen the RAW bundle incorporated free of charge rather than Titan the HD Extract though. On its own the RAW bundle costs $995 US.

The one thing I do like about Convergent Design is that they have constantly been adding new features through firmware over a prolonged period of time and not releasing new recorder/monitors. This gives owners the peace of mind that their product won’t become superceded in six months’ time.

For more information on the new pricing and Titan HD Extract head over to Convergent Design.