Matt Porwoll has posted Behind the Lens episode four over on the AbelCine blog, and this time he’s taking a look at Fujinon’s Cabrio 19-90 T2.9 zoom.

It’s a lens that should be suited to most shooting situations (try saying that three times quickly), although the price you pay for that versatility is weight. At just under 6lbs (2.7kg) it’s no lightweight, but Matt reports that handheld it’s more of a reassuring heft than a backbreaking weight. 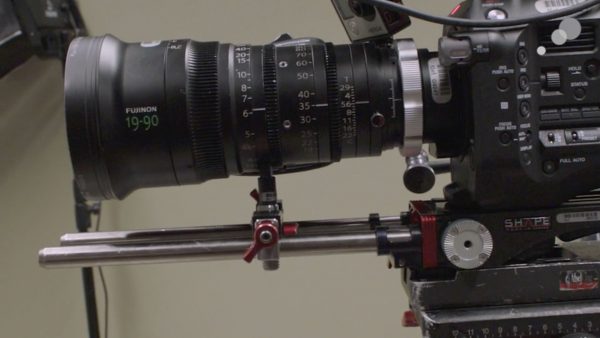 It’s a PL-mount lens with a constant T2.9 aperture, 200° focus rotation and a servo unit. This has start/stop control, a zoom rocker, auto iris button and remote ports for adding external focus and zoom controllers. You can also disengage or remove the unit to use it entirely manually.

It was the sharpest lens Porwoll and his team tested, although there was some evidence of focus breathing, particularly in the test interview setup.

The lens offers manual back focus adjustment for making sure your infinity focus is set correctly in the field. The 19-90 supports /i metadata on compatible cameras, so you’ll be able to record data like focal length and aperture if you’re handing off footage to colleagues who might need that information.

My favourite feature though is the luminous barrel markings, so you’ll be able to see what you’re doing in the dark. Nice.

It’s not a cheap lens – it was really conceived for cinema use and the current retail price is nearly $30,000 US. But for high-end docs, Porwoll calls it ‘gorgeous.’ Hard to think of a better recommendation, so if you (or your producer) has the budget, this sounds like a great option.

Behind the Lens episode four: and there’s more

As usual there’s plenty more information on Matt’s blog over on the AbelCine website. And if you haven’t watched the other episodes in the series, covering the Fujinon MK 18-55, Zeiss 21-100 and Canon CN-E 15.5-47 & 30-105 Compact Zooms, they’re all available to watch there as well.

What do you think of the Fujinon Cabrio 19-90? Firm favourite? Impossibly exotic for your line of work? Let us know in the comments below…