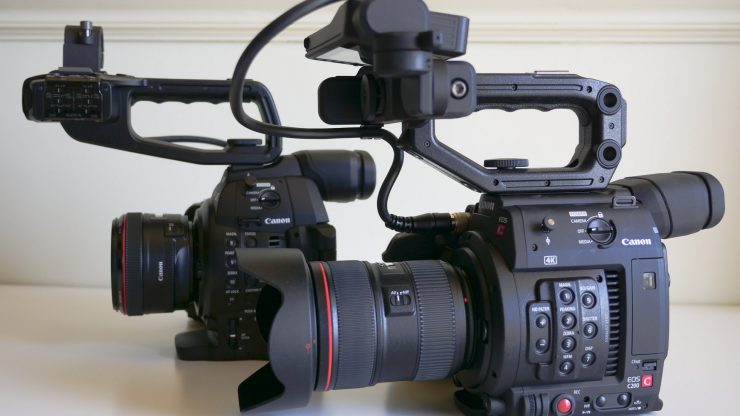 I’ve been a long time C300 Mk I user. The station I work at has one and it’s still in service today performing beautifully. C Log works a treat and color is very nice. However, it is getting long in the tooth. I have limited frame rates and it’s a 4:2:2 8bit 50Mbps HD camera. We are looking at upgrading but haven’t decided what to go to yet. Does the new Canon C200 stack up?

I’ve personally owned a C100 Mk I. Unfortunately the EVF and LCD weren’t very good. Canon fixed that with the C100 Mk II. I like the color with the Cinema EOS cameras. You hear this a lot and Canon knows you like it too. WideDR is really great when you don’t want to grade. Shooting in C Log with the C100 MK I with the weaker AVCHD codec could be a problem though – true for a lot of cameras that shoot 8bit 4:2:0.

I picked up a Atomos Ninja 2 recorder to get 4:2:2 8bit out from the HDMI. With the C200 it looks like you would have to do the same if you don’t want to shoot in Cinema Raw Light 4K DCI. More on that later.

Since the initial release of the C100 Mk I a lot has happened and I personally moved to Sony Alpha E-mount cameras. I bought an a7s. It had better specs than the $5,500 US C100 MKII with 4K output via HDMI. The gap continued to widen as new cameras were released. Personally I didn’t want to invest in an HD-only camera like the C100 MKII. And at the time I couldn’t afford the $16,000 US C300 Mk II.

Eventually I gave in and purchased a used FS7 for a very fair price. A nice camera that finally had what I wanted in a digital cinema camera. A little heavy but the Internal XAVC-I  codec is solid, and no need for an external recorder. High frame rates in UHD look great. Sony puts more features into cameras than Canon and charges about the same or a little less. As a Canon shooter this is frustrating.

Color science isn’t the strength of Sony’s digital cinema cameras. To my eye Canon is better. If you want nice color you end up with a more expensive Canon Cinema EOS with less features and expect to do some grading in post. Since I’m practically a colorist these days it’s not an issue. I can get the look I want from a Sony camera.

It’s all about the codec isn’t it?

The codec a camera shoots is very important to me. 4:2:2 8bit should be the minimum for most Digital Cinema cameras going forward. The C200 has a new MP4 codec that is 4:2:0 8bit, however in a future upgrade Canon will include XF-AVC. This codec could give us a better bit depth and color space in HD and UHD. Maybe.

For Canon Cinema EOS Mk I users I would see the C200 as a very good upgrade, but if I have to still use an external recorder to get a better codec I might have to look elsewhere.

The introduction of Canon Cinema Raw Light is interesting.

The only resolution you can record in 12bit and 10bit 4:2:2 with Canon Cinema Raw Light is 4K DCI. This means if you want a 16×9 aspect ratio not 1:9:1, which is a little wider, then you will have to crop the image in post. Maybe that’s fine, but not ideal for me. If you always crop UHD say in a HD timeline then it will be a non issue but I would have to shoot differently making sure I shoot for the crop and that isn’t something I want to do. So why would Canon do this? Good question. Partly because Canon must think only indie-filmmakers are interested in higher quality and only shoot in DCI aspect ratio. But us production folks like higher quality too!

4:2:2 8bit would be perfect for most people. 10bit even better. The image will be easy to grade and should hold up very well in post.

Now Raw is another beast. You might have to transcode the internal recorded Raw files if they don’t play back well on your computer or are not supported in your NLE. Transcoding is time consuming and takes up more space on your hard drive. The option to simultaneously record 2K Proxies on SD Cards will be invaluable if you choose to use Cinema Raw Light. This is a very nice feature on the new C200.

Should C300 MKII Owners Be worried?

Probably not. Even though the C300 MKII does not record Raw internally it does have solid internal codecs that aren’t available on the C200.

The new Canon C200 will record Canon Cinema Raw Light internally to a CFast 2.0 card, but only in 4K DCI, not UHD or HD.

I care a lot about bit depth (10bit vs. 8bit) and color space (4:2:2 vs 4:2:0). The 4:2:2 and 10bit will hold up to grading in post much better than 4:2:0 8bit. This is why people use external recorders so often with the C100. I did just that and after a couple of years of doing so I preferred to not have to always use one. With the C200 you might end up going back to using a recorder to get a better codec like DNx or ProRes in 4:2:2 10bit if the recorder will be able to read the Raw signal from the HDMI out. Again this isn’t something i’m interested in doing and would be a hard sell if that’s the way I had to use the C200.

Canon Cinema Raw Light internal recording is very intriguing, but if it’s only available in 4K DCI that’s disappointing. I do not understand why Canon doesn’t just give people a better HD option as well. 4:2:2 8bit or 10bit should be the standard in HD now. The GH5 offers 400Mbps 10bit in 4K and HD. That camera costs less than $2,000 US.

Okay we got the codec, Raw Light and media out of the way so lets talk about the body. I like it!

So nice to see the clamshell gone. I’ve never liked it on the C300 MKI. It’s so hard to see the audio settings after you have set your shot. Now we have all the audio connections and controls on the body. The audio level controls are easily accessible on the back as well. So much better.

XLR audio input on the right side and on the back are also much better options. The one in the back might be a little awkward when using the EVF.

The touch screen LCD placement looks good with the option of flipping it around and mounting it in different positions for best viewing. Canon rules video AF and the DPAF combined with a new touchscreen should be a powerful feature. Overall the body and function buttons look well designed and user friendly.

I wish the C200 shipped with better codec options in 4K UHD. Canon has stated that XF-AVC is coming in a free update but we don’t know if the codec will be different or crippled from it’s original specifications. At minimum recording a higher quality 4:2:2 8bit 4K UHD file would be a nice upgrade from any of the Mk I cameras.

Would I get one? I’m not sure yet, but I like a lot of the upgrades. Having 60p in UHD and 120 fps in full HD is great. The price is pretty good at $7,499 and $5999 for the C200B model that has no EVF. Just as long as I don’t have to use an external recorder to get a better codec. I’m looking forward to trying one out at Cine Gear Expo and getting to learn more about the C200.

Does this new arrival from Canon have you wanting to upgrade? Let’s talk in the comments section below.