Inside the FBI: New York is a documentary series where filmmakers were given unprecedented access to the inner workings of the FBI’s investigatory HQ in NYC. I talked to the DP Daniel B. Levin about his work on the series, the challenges he had to overcome, and the equipment he chose to use.

Q. What is Inside the FBI: New York about?

Inside the FBI: New York is a six-hour docu-series that follows the men and woman in the FBI who are working every day to fight terrorists, gangsters, bank robbers, cyber criminals, sexual deviants and more. These are the real people that countless fictional films and TV series portray and our goal was to put a face to these unsung heroes and tell their stories. 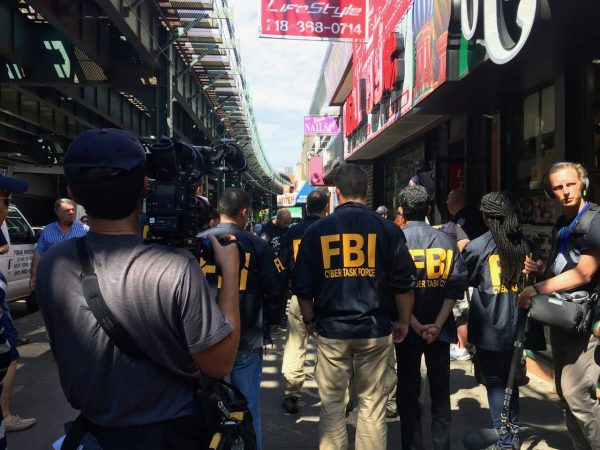 Q. How did you become involved in the project?

I am the Director of Photography for this series. I have been working with the production company Brick City TV for over 10 years as a DP and my father Marc Levin of Brick City TV is a filmmaker and the EP of this series along with Dick Wolff. I am a third generation filmmaker and I had the tremendous opportunity to grow up and work within my family business of film and television. 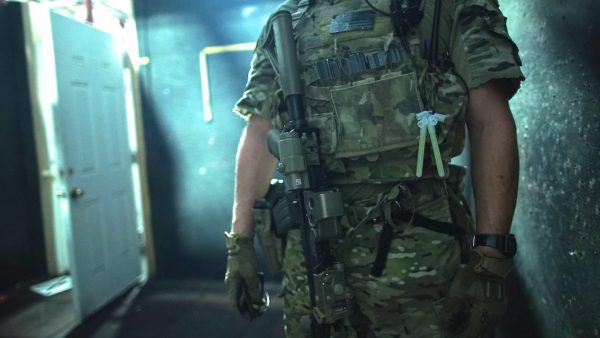 Q. What were the biggest challenges you faced as a DP working on this project?

On the top level the biggest challenge on this project was access. This is the first time the FBI has ever done anything like this, letting a documentary crew into their offices and operations. The access is historic, but as a filmmaker and a DP you always want to push the limits, get more, closer to the action, into every closed door meeting. It took a while for the agents to get comfortable and trust us, so a lot of it was relationship building. Once we get into operations and takedowns, we inherently wanted to be as close to the action as possible and for various legal and safety issues that wasn’t always possible. Eventually it worked itself out and we were able to have a great working relationship with the agents and the FBI and we got to shoot a lot of amazing things that no other documentary crew had seen before.

There is one moment I remember specifically, when we were in Quantico, we shot the ceremony in which the new agents who had just graduated that same day were given their service weapons for the first time. It was a historic and important ceremony within the bureau, something that we were told had never been filmed before. From small intimate moments like this to big take downs and raids, it was a very unique and rare opportunity for us as filmmakers. 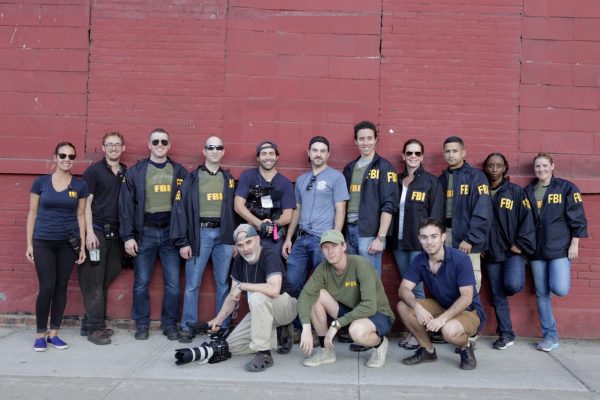 Q. How big was the crew on this project? Did you have assistants, second camera operators, sound recordists etc?

Another challenge was keeping out crew size small and working with a small footprint. A lot of the agents we were following normally don’t talk to the media and keeping a low profile on the street, you wouldn’t necessarily know they were agents if you saw them in public. So when going on raids, stakeouts and following people of interest with the agents we had to keep a low profile as well and keep a small footprint. We had multiple camera operators throughout the series, Sam Sielen, Pedro Feria Pino and Mark Benjamin were the core camera team. We were covering a lot of different stories at the same time throughout the production, so the majority of the scenes were one camera shoots. We didn’t have AC’s and our camera ops had to be self-sufficient and carry with them what was needed to get the shoot done. We had a sound operator and many times other crew members like producers had to multitask and boom or shoot second camera in a scene. The basic crew on the day-to-day shoot was three-four people. A producer, camera op and sound operator, that was usually it. 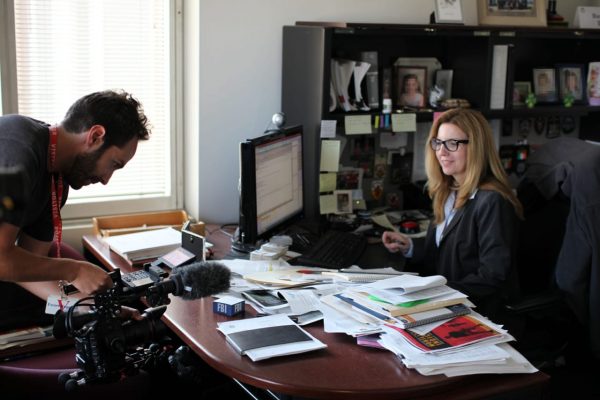 Q. What equipment did you use on the shoot?

We shot the majority of this series on Canon C300 MkI and Mk II’s. We used Canon EF L-Series Lenses along with the Canon 18-80mm T4.4 cinema zoom lens. We also used, small mirrorless cameras like the Sony A7s and the Panasonic GH4 as second cameras, usually on an Ikan gimbal for tracking shots and B-roll. The idea again was to keep a small footprint and the gear needed to be set up and broken down quickly. 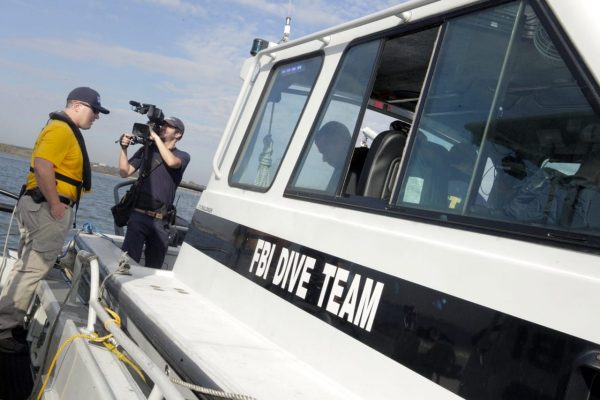 Q. Was the equipment you used important for this shoot, or was it more to do with how you used it?

The Canon C300 is a standard documentary camera in the industry, we got our hands on the Canon 18-80mm cinema zoom early on before it was released to the public and we were one of the first crews to use it in the field, which was exciting. We ended up using one piece of equipment that I didn’t know much about before the shoot, the Juiced Link Little Darling Audio Recorders, which internally record to their own micro SD cards. These became necessary because we were not allowed to use any wireless sound equipment in the federal buildings. We had to go back to hardwiring and figure out how to work around this. We found the Little Darlings and they became invaluable when we were restricted from using wireless equipment. 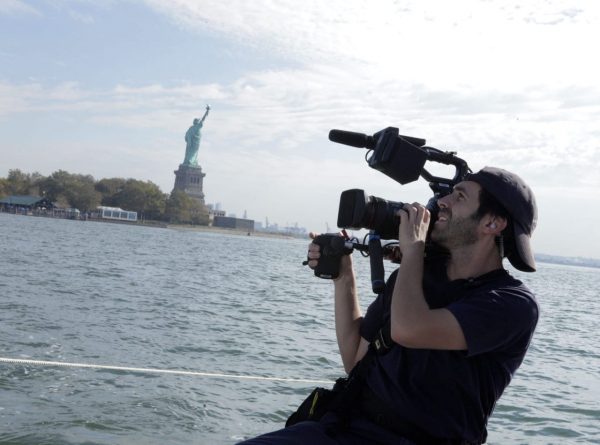 Q. Why did you choose that equipment?

We choose the C300 because we love the Canon look and function of the C300. They are small compact and extremely versatile, they are great in low light and are great for one man camera operators who need to be compact and self contained. Everything usually gets chosen out of necessity and function, whatever is most appropriate for the demands of the production and this production demanded versatile run and gun shooting with a cinematic look.

Q. Was there a particular “look” you wanted to achieve?

Brick City TV has been producing doc series for years and I think our look can be described as cinematic documentary vérité and this series was no different. We want the viewer to be imbedded in the characters lives, on top of the action and in the moment. We want the drama and action to be cinematic and play like a scripted drama, so this was run and gun vérité filmmaking at its core. 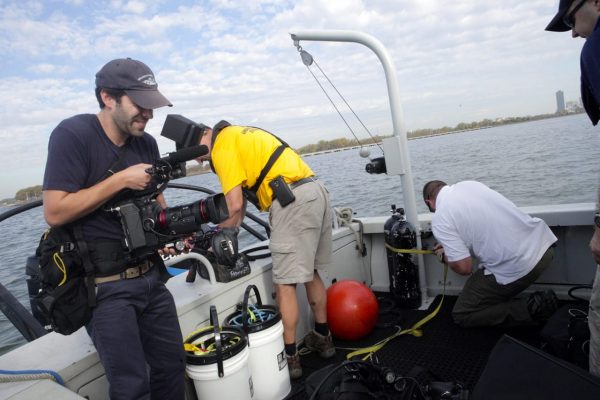 Q. For a documentary shooter what would be your biggest piece of advice?

My advice for a documentary shooter would be to stay versatile and think like a producer and editor. Study the scenes and characters that you are working with, understanding the characters and the world is important. Being able to listen to the story and connect it through your shot choice is important. Your placement as a shooter is crucial, putting yourself in the action or being able to move within the action, anticipating what is going to happen in a scene and putting yourself in the right place to see it unfold is extremely important. Ultimately in the documentary world the DP is making some of the most important decision in the field on the fly. Whatever your camera sees will tell the story, you have the power in your hand to tell the story the way you want. You should be bold with that responsibility and use it to empower everyone else on your team from the producers to the editors. Make your editors happy, get them enough material and coverage so they can craft a well rounded scene. If your editors like you, you are in good shape. And finally get closer to the scene and always push for more access, you will eventually will get it!

The final two episodes of Inside the FBI: New York will run back to back next Thursday, June 1st at 10pm & 11pm on USA Network.

Previous episode can be streamed via – http://www.usanetwork.com/insidethefbinewyork