The Zacuto Scissor Lens Support has been designed specifically for use with the new Fujinon MK E-mount zoom lenses. The Scissor Lens Support attaches to the base of the lens with included M3.5 screws. The lens support features a unique design: it opens with a scissor motion, and you can then clip it securely onto 15mm rods.

The clever part about the scissor design is you can leave the lens support on your lens at all times, as it folds up against the bottom of the MK lenses. This will certainly save you time as you don’t need to stuff around taking your lens support on and off every time you want to use the lens.

Using a lens support on a Sony E-mount camera is a good idea, especially if you are running larger and heavier zoom lenses. The Sony E-mount is designed for lightweight stills lenses and not heavy cinema glass. The biggest problem with the E-mount is that it doesn’t feature a friction ring, so if you do want to use it with a heavier lens you can run into problems with the lens moving slightly. This can throw out your back focus.

In comparison, a  PL-mount has four flanges on the lens that engage via the use of a friction locking ring on the camera side. When you lock a PL lens onto a PL mount the ring pulls the flanges tightly against the mount so that it remains in the correct position from the sensor. 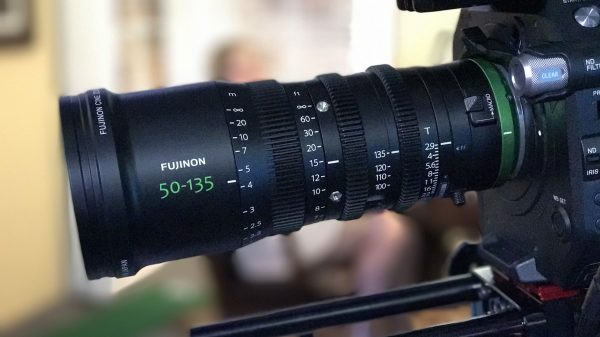 The Fujinon MK series zooms only weigh in at 980g which is actually no heavier than a lot of stills zooms. Whether you actually need to use a lens support with the Fujinon MK zooms given their weight is probably more of a personal choice than a must-do. I always err on the side of caution though and if it was me I probably would use a lens support.

The Zacuto Scissor Lens Support will start shipping in around four to six weeks for (a rather pricey) $200 US.