Accessory maker Movcam have just announced the Movcam GH5 cage at NAB 2017. The cage is contoured around the grip of the camera, fitting closely to leave ports unobstructed. It’s made from magnesium, so it’s still strong but isn’t as heavy as aluminium.

The top handle is removeable (though sadly not toolless), with a coldshoe for mounting accessories. It’s also compatible with the GH5’s XLR adapter and won’t foul your microphone connectors. There’s also space to use the HDMI port protector that ships with the GH5 and another coldshoe on the right hand side of the top of the cage. 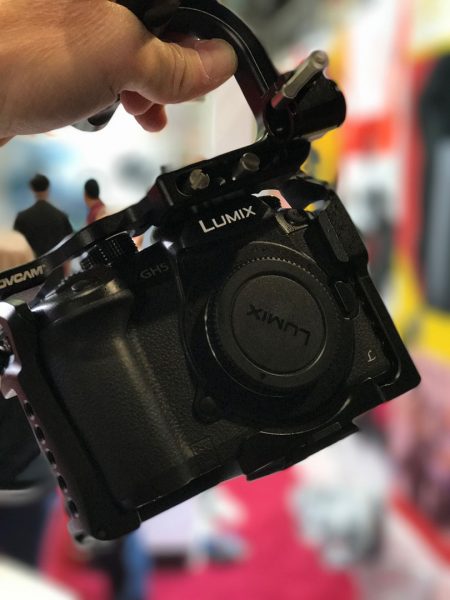 Underneath there are a few changes compared to the company’s cage for the Sony a7 series. Perhaps the most useful alteration is the fact that the dovetail plate on the bottom of the cage is now removeable, so you can rest the camera on flat surfaces more easily. There’s a 1/4″20 thread underneath to attach the camera to a tripod plate.

If you buy the kit there’s still a riser that puts the camera at the right height for 15mm rods, but now the small bracket that acts as a support for metabones adapters doesn’t need to be connected to the riser, making it easier to lock the adapter to the camera without using the whole rig.

The cage kit should be available in the next three weeks, with pricing to be confirmed shortly but we’re expecting it to be around the US$300 or less mark.