Part of the CN-E family

Not only does the CN-E 70-200mm share the exact same constant T4.4 aperture as the CN-E 18-80mm, but it is also the same weight (2.65 lb/1.2kg) and physical size. This is a good move from Canon to offer shooters two lenses that cover a pretty comprehensive focal range (apart from super wide) while keeping both lenses the same physical size and weight. The build quality of the lens seemed to be on a par with the 18-80mm. 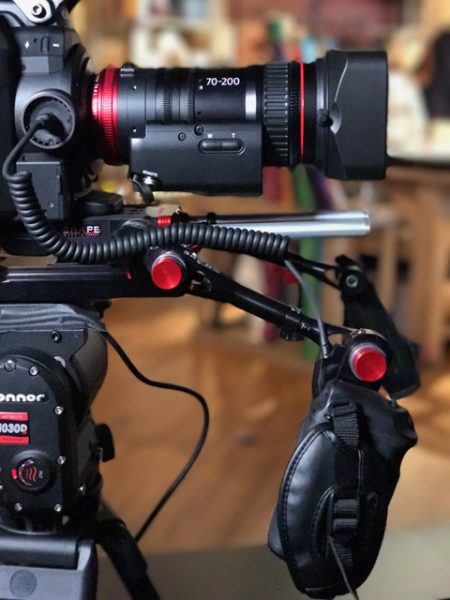 From my short time using the lens on the show floor I found it to be very similar in performance to the 18-80mm, but it does seem to suffer from a large amount of focus breathing, which may be a dealbreaker for some shooters who had it on their shopping list.

Some shooters may be disappointed that this lens doesn’t feature a faster constant T3.1 (f/2.8) aperture. When I asked why Canon couldn’t make the lens faster than T4.4 I was told that the company wanted to make a compact, lightweight lens and that making it faster would have made the lens too big and added additional weight and cost.

The Canon Canon CN-E 70-200mm zoom lens is scheduled to be available in August 2017 and according to people I have talked to at Canon it should be around the same price as the 18-80mm T4.4: $5,225 US. In addition, the ZSG-C10 accessory grip works with both lenses and is currently available for around $499 US.